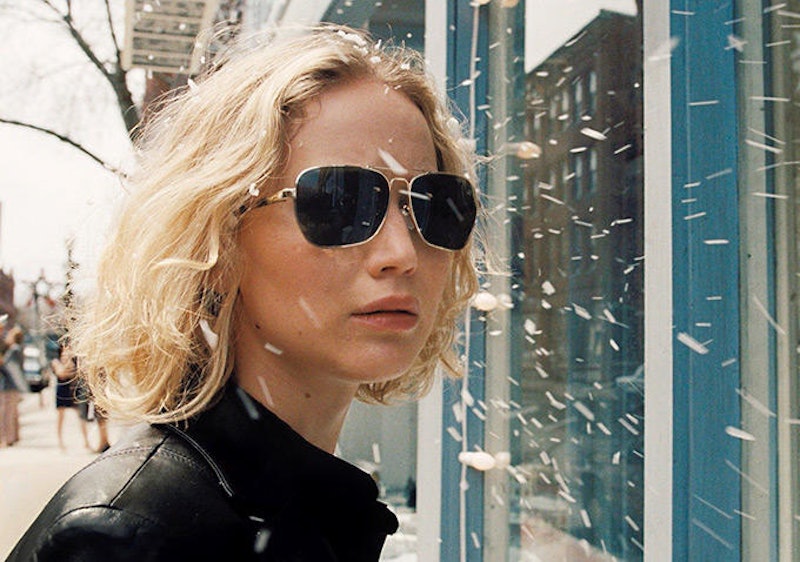 The same team behind the magic of Silver Linings Playbook are back again for Joy, which opens in theaters Dec. 25. The film is directed by David O. Russell and stars Hollywood darling Jennifer Lawrence, Robert De Niro, and Bradley Cooper. This time, it appears the Silver Linings squad are tackling the story of entrepreneur Joy Mangano (Lawrence), inventor of the Miracle Mop. But how true-to-life is Joy ? The answer is a bit complicated. But essentially, Joy is unofficially loosely based on Mangano's rise to fame, reports Variety, as the film's focus is on women like Mangano, who was a divorced mother of three children who managed to build an entire empire, more so than Mangano herself.

After screenings of the film in New York and Los Angeles, in a post-screening Q&A that took place in New York, Lawrence described the film as a tribute to the "women who are the unsung heroes of their households," according to Entertainment Weekly. At the same Q&A panel, Russell said that Lawrence, De Niro, and Cooper's characters were inspired by their "growth together in the last five years," from working on previous films together. Two more fun facts: Joy marks the third time that Lawrence and Russell have worked together and is the first film of Russell's films to center on a female protagonist.

"It’s the story of that woman’s journey from the time she’s 10 to the time she’s 43. I’d never done that [before]," Russell said of the film at the panel, according to The Hollywood Reporter. "And I’d also never gone into [a movie about a] more grounded, mature person, a more ordinary person who became extraordinary and was extraordinary from a young age. I got to do the magic of that young age, I got to do her nightmares, and I got to see what it was like how she handled success."

And what a way to go. Joy is an important film for several reasons, but the most pressing of all is the fact that it celebrates the female visionary — it delves into her trials and tribulations, in addition to showcasing her success. The beauty of Joy is that the film isn't relegated to one woman's story, but to every single woman who's ever had an idea and followed with the determination to see it through. The concept of Joy is a refreshing break from films like Steve Jobs, which, while relevant, still sings the praises of the brilliance behind a well-known male entrepreneur, in a world where brilliant male visionaries are extremely visible and ubiquitous.

"Usually [a film’s focus] is about the fight on the way to success and the happy ending," Lawrence told Entertainment Weekly earlier this year, about a certain aspect to Joy that I think provides an added layer of realism to the film. "David goes on to tell the struggle that comes after that, along with all the sacrifices that come with finally getting what you want." Despite the focus of Joy on a businesswoman, the themes the film presents are universal and are bound to be relatable in some sense for anyone who goes to see Joy's journey in theaters on Christmas Day.