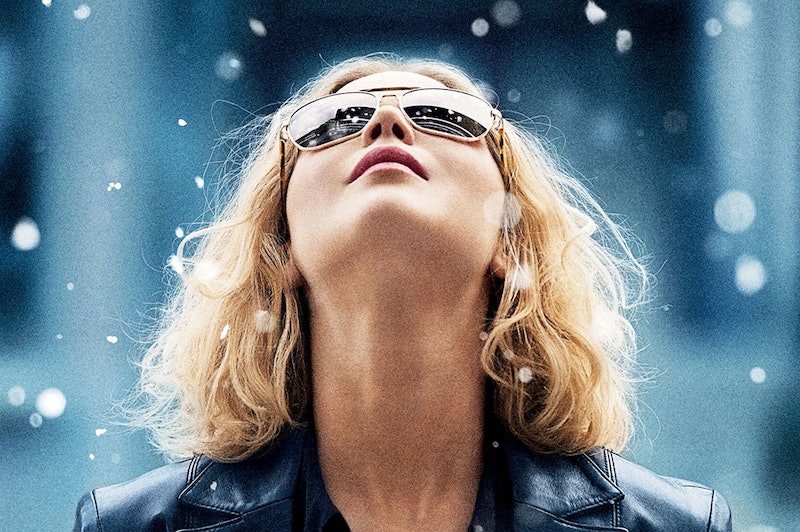 Are you ready for 2015's second movie about Joy? The new trailer for the upcoming David O. Russell movie Joy starring Jennifer Lawrence may have arrived with somewhat less fanfare than that of Star Wars: The Force Awakens earlier this week, but that doesn't mean it's anything to scoff at. In fact, by the looks of the trailer, Joy is going to be one of the major heavyweights of the 2016 Oscar season.

Although Russell has been working steadily in Hollywood since the 1990s, directing well-known if off-beat films like Three Kings and I Heart Huckabees, his efforts only started being noticed by the Academy with 2010's The Fighter — and Oscar voters have been obsessed with the filmmaker ever since. His past three features in a row (including Silver Linings Playbook and American Hustle) have all landed Best Picture and Director nods, as well as a bevy of acting nominations.

The trailer for Joy has everything a Russell aficionado could want: terrific performances from usual suspects Lawrence, Robert De Niro, and Bradley Cooper, a fantastic score, and a sprawling story. Here are the Oscar nominations Joy is most likely to receive in 2016, based on what's on display in these two-and-a-half minutes.

Since no one knows the size of this field before the moment the nominees are announced, it's hard to say for sure which films will wind up landing a spot. But, after three films in a row nominated in this category, it seems impossible that Joy wouldn't score a nod, especially if the field expands to nine or 10 nominees this year.

Russell has landed Best Director nods as often as his film have landed Best Picture nods, so if Joy lands in the top race this year, expect Russell's name to be in contention as well. But he's facing incredibly stacked competition this time around, with former winners facing off against respected auteurs. But, if Russell could be nominated in a year that snubbed practically every frontrunner and former winner, then surely he can squeeze in here.

If Lawrence scores a nod for her third consecutive Russell film, that will be her fourth nomination by the time she's 25 (including her inaugural nod for Winter's Bone in 2010). By comparison, Oscar queen Meryl Streep was 34 before she landed her fourth nod. Interestingly, Lawrence's biggest competition this year may come from another shockingly young actress: 26-year-old Brie Larson, who has been drawing raves for the harrowing literary adaptation Room. If the Academy decides it only has room for one twentysomething blonde ingenue in this race, it'll be a tough call.

Since Joy is so focused on Lawrence's character, there isn't a male presence large enough to submit in the Lead category. While this will sadly break Russell's streak of getting performances nominated in all four acting fields, there is no shortage of supporting performances in Joy for the Academy to consider. Robert De Niro and Bradley Cooper stand a chance at inclusion — particularly the former, with a more sizable role as Joy's father, Rudy. Édgar Ramírez could also be a dark horse contender as Joy's husband, Tony.

The options are even more plentiful in the Supporting Actress category. The most likely candidate is Diane Ladd as Joy's grandmother, Mimi. A three-time nominee, Ladd is the mother of actress Laura Dern and the ex-wife of actor Bruce Dern, both of whom landed long-overdue second nominations in the last two years running. Will the Academy be able to resist the narrative of keeping it in the family for the third year in a row?

Each Russell Best Picture nominee has been accompanied by nod in the Screenplay categories. The screenplay for Joy was at the center of a recent controversy when original writer Annie Mumolo had her screenwriting credit removed from the film. (Mumolo wrote Joy in 2012, but, after Russell joined the project, he did extensive rewrites, and now holds the sole "Screenplay by" credit. Mumolo retains a "Story by" credit, and her name will still be on the Oscar ballot if the script is nominated.) If Joy is well-received by critics, this controversy shouldn't stop the film from easily finding a place in a field that essentially has 10 nominees between two categories.

It's harder to predict how Joy will do in technical categories. Fighter, Playbook, and Hustle all earned Film Editing nods, and it's hard to imagine Joy not replicating that pattern — especially for a film that pares down a sprawling film chronicling four generations of a family into one cohesive two-hour movie.

It's always hard to tell ahead of time how the fickle Academy members will vote in any given year... but, given Russell's track record at the Oscars, another large crop of nominations certainly seems in the cards for Joy. Check out the trailer below.