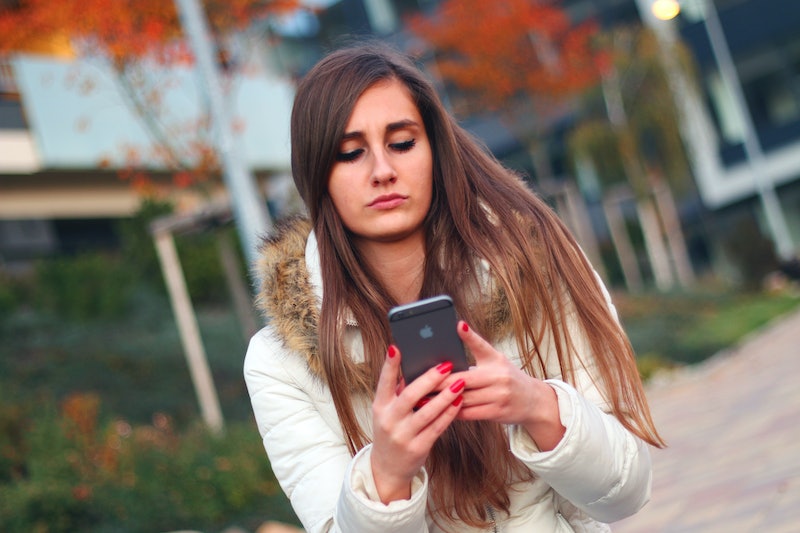 There are a lot of ways to detect passive aggressiveness or anger within a text message, but there is no more certain way of indicating that you're upset than responding to a text by ending your own text with a period. Of course, punctuating your text messages doesn't always actually mean you're angry — but according to research published in Computers and Human Behavior, people perceive text messages that end with periods to be less sincere because they mirror actual, verbal cues from the non-computer world.

Picture this: You've asked your friend Ryan if he's angry with you and he responds a sharp, short, "No." You push forward and ask, "Are you sure?" and he responds with a brisk, "Yes." Even though we can't see the punctuation in face-to-face communication, we can feel the weight of the response and are likely to assume that Ryan — despite his claims — is actually angry.

That's what the researchers tested out. According to the Washington Post, they showed 126 undergraduates a number of exchanges framed as one of two different situations: Either text messages or notes written out by hand. Some of those exchanges featured sentences ending with periods; others did not. Among the messages said to be texts, those with periods were rated as less sincere than those without — a difference that didn't hold for the handwritten messages. Apparently over text message, a period translates as snippiness, so it's hard to shake the feeling that the person you're texting is angry.

Periods aren't the only social texting faux pas we unknowingly (or knowingly) commit. Check out these four other texting sins we've all been guilty of.

Listen, I use just as many emoji as the next babe — but sometimes when you're having a serious conversation with someone over text, maybe it's worth leaving out the excessive emoji use. While they can be useful for conveying emotion, each emoji means something slightly different to everyone; subsequently, you may not communicating clearly.

2. Unnecessarily Breaking Up Your Texts

When we all had T9 texting, it made sense for texts to break up every 160 characters or so. But in the age of smartphones, "hey," "what's up," "hello," "I was just," "wondering," "if you wanted," "to," and "hangout" don't all need to be separate texts. You can fit that all into one message. I promise.

3. Not Paying Attention to Autocorrect

Autocorrect is both a blessing and a plague, and no matter how many times I try to teach my phone that I never mean to say "what the duck," it refuses to learn. Sometimes, autocorrect does something silly and everyone laughs, but other times it can make you seem rude or inconsiderate. Pay close attention to it and proofread important texts before you send them!

4. Texting Someone You're Physically Near

I understand it can be funny to text someone in the same room as you, but far too many times I've sent my mom a text form my bedroom while she's in the living room... which is about 10 feet away. While texting is a valid and legitimate form of communication, face-to-face communication certainly also has its worth. Use it when you can!