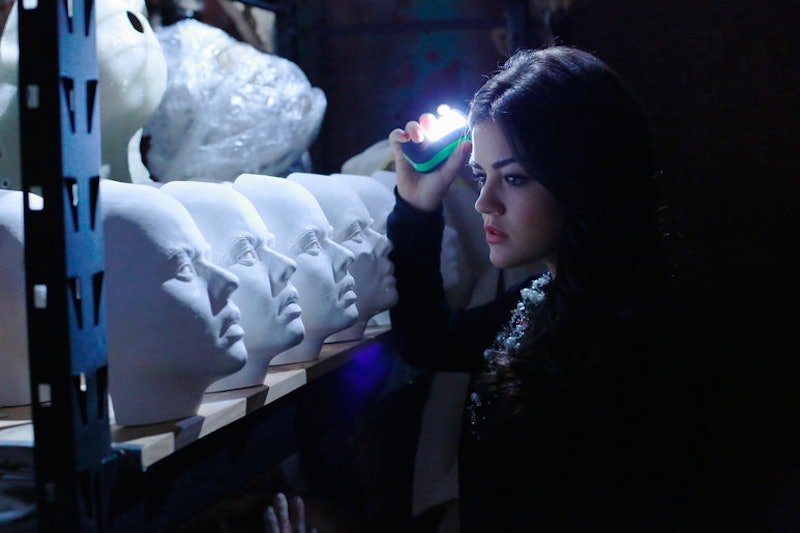 Officer Holbrook's partner, Linda Tanner, has arrived in Rosewood—I wish she'd come even sooner. When she first sees the Liars, she jokes, "If I dressed like that when I was in high school, my dad would've had a stroke." I am seriously digging Tanner, if only because she's the first female character on this show to resemble an actual adult human.

The detectives pay a visit to Ashley Marin's office at the bank, where they discover a handgun and false passports tucked inside Detective Wilden's security deposit box. Back home, Mama Marin finally admits to Hanna that she was in Rosewood the night Wilden was murdered. I'll update you in two or three episodes, when this storyline finally gets somewhere interesting.

With her dad back in town to answer allegations from Family Services, poor Emily's life continues to unravel due to her—in Aria's words—"little lies." The only thing "little" about Emily's recent instability is the diameter of her stolen hydrocone pills. To make matters worse, Emily learns that she has partially torn her rotator cuff, an injury that may end her swimming career.

Meanwhile, Toby continues his Walk Two Moons-y quest to learn more about his mother's death, tracking down her psychiatrist at a facility in upstate New York. Despite his British accent, the universal signifier of wisdom, Dr. Palmer proves to be ill of mind himself—a hospital resident, not a faculty member. But he does make cryptic reference to a "troubling" girl he hoped Mrs. Cavanaugh would avoid.

Alas, karate instructor Jake is way too likable and emotionally straightforward to be a legitimate love interest for Aria. After they run into Malcolm, Ezra's baby mama's baby, Aria ends up spilling the whole "Don't Stand So Close to Me" backstory to her new boyfriend. Jake further proves his suitability as a mate by correctly interpreting this as a huge red flag and peacing out.

Though she'd be sad to see Ella go, Aria notes that her mom's impending move to Austria could mean an escape from A. True, but what if "A" stands for Austria? Or Austria-Hungary? Has Pretty Little Liars been leading up to World War I this entire time?

Spencer finally tells her knockoff Mariska Hargitay mom that she was rejected (Or was she deferred? Get your facts right, PLL) from U Penn. Later, she hides Melissa's mask inside a suitcase, then surreptitiously films her sister as she makes the unsettling discovery. That's a real N.A.T. Club move, lady, and it's not becoming. If you gaze long enough into the A-byss, the A-byss will gaze back into you.

Because narrowly avoiding a violent death just once isn't enough for the Liars, Aria and Spencer tail Melissa back to Hector Lime's mask workshop. This place is only about 15% less viscerally alarming than Buffalo Bill's basement—and only gets creepier when Aria discovers the Liars' facial castings, still intact, that the sculptor had promised to destroy.

Spencer finds Melissa smashing her molds outside, and the Hastings sisters have an angry confrontation on the dock. Melissa admits she was on the Ghost Train, but tells Spencer that she's always worked to protect her—and that she too suspects that Ali might still be alive.