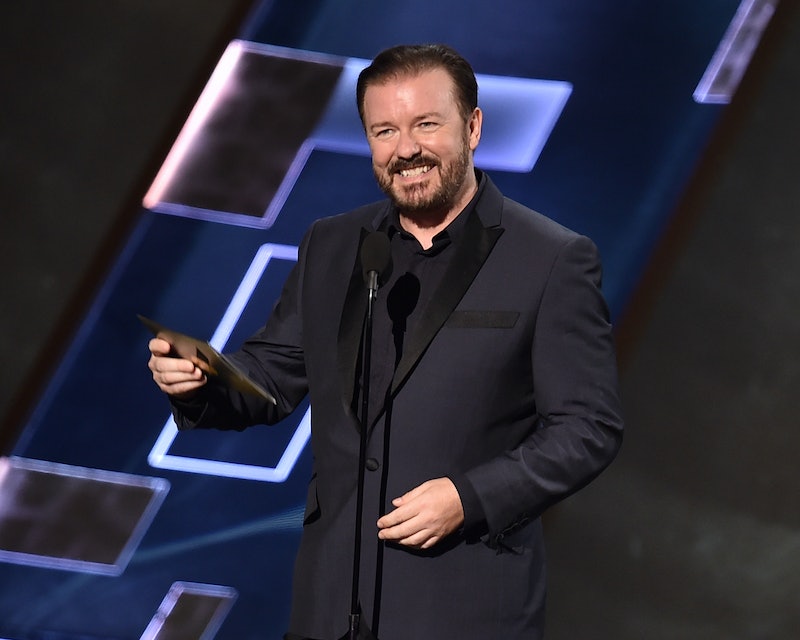 It's that time of year! No, not the holidays, I'm talking about a much more glamorous and magical time — award season! The Golden Globes kick off the new year in celebrating all of the amazing work Hollywood has done this year. On December 10, the names of Hollywood actors, writers, and directors will be revealed, but there's one name we don't have to wait for, and that's who is hosting the 2016 Golden Globes. This year, like past years, the show will be in the safe and tender hands of Ricky Gervais, as he embarks on hosting the Golden Globes for the fourth time since 2010.

This isn't Gervais' first rodeo, which gives us an idea of what we can expect from his gig this year. Gervais hosted the Golden Globes in 2010, 2011, and 2012, but relinquished the honor to Amy Poehler and Tina Fey from 2013-2015. Now, he's back in the saddles and something tells me that if you find Gervais funny or not, you're going to have an opinion on his hosting ability.

Gervais' past performances at the Golden Globes have earned him two Emmy nominations in the Outstanding Special Class Program category. He didn’t win, but that doesn't mean he can't give it another go. Whether you're new to Gervais' comedy or not, here's what you can expect for the 2016 Golden Globes based on his past hosting moments.

He'll Joke About How He's There Again

Gervais has said that after the 2012 Globes, he told his agent to never let him be persuaded into hosting the Golden Globes again. Yet, here we are. While Gervais loves to make fun of others, he's usually a good sport about making fun of himself, too. Here's that opportunity.

One of Gervais' best bits is calling attention to the outrageous treatment one gets as a celebrity. So, if he brings up the grandiose swag bag the guests give — and anyone feels guilty about receiving it — I'll take one. Right here.

There Will Be Swearing

Well, maybe not if the producers of the show have their way. In case they're worried though, Gervais and the show, will probably be put on a time delay to ensure everything stays PG.

Then again, Gervais' jokes are still his jokes, which means there will probably be some people offended by the things he says. Just remember that it's all in jest and what he's saying is meant to entertain people, not personally offend you (did you get that, Grandma?).

He'll Take Jabs At The Globes

Don't be surprised if Gervais spends some time going after the Golden Globe awards themselves. While the Globes are important, they're not that important (they're no Oscars, after all).

Finally, expect Gervais to do some target practice at those in the room. It wouldn't be an award show without it.