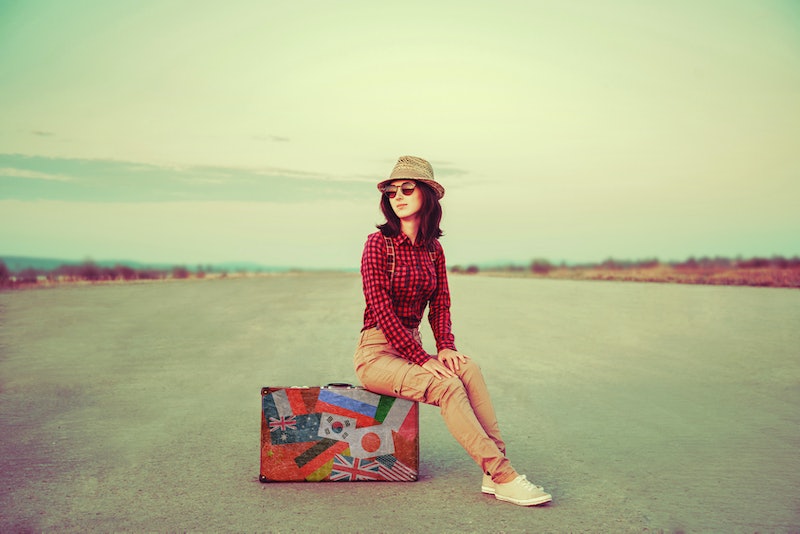 When I first joined OkCupid, I kept my online dating location settings at the default, looking for people up to 25 miles away. I didn't really think about it. Honestly, I didn't have a good sense of what areas that included. (It turned out that from Providence, RI, where I was living, it included all of Rhode Island and parts of Massachusetts and Connecticut.) It seemed practical to only date people who could easily drive to my place and back over the course of an evening. But recently, I've met some people and learned some facts that have made me reconsider these narrow criteria.

First, while out on a rooftop bar in Manhattan, I met an engaged couple. I was surprised to learn that one member of that couple, Joe*, had moved to New York from London after meeting his fiancé Emma* on OkCupid. After a year of messaging and visiting each other, he proposed.

This wasn't the only relationship I knew that began online while two people were residing in different places. Stephen, 31, put far more thought into his OkCupid settings than I did, determining he could handle 100 miles of driving and gas money, and seriously dated two women who lived over 50 miles away. Peter, 45, looked 75 miles and two hours away in Davis when he wasn't having luck in his home city of San Francisco.

Others have gotten into long-distance relationships online without even intending to. Andrew, 23, met his boyfriend on Tinder while he was visiting New York from Berkeley, and they've been together long-distance for nine months, though they plan to eventually live in the same place. Rosemary, 27, befriended her boyfriend on Facebook through mutual friends before they confessed they had feelings for each other. She lived in Redlands, CA, while he lived in Brooklyn. He moved to Redlands for the summer, and they moved in together in Brooklyn afterward.

I'll admit, when I heard these couples' stories, I was skeptical. But after hearing their reasoning and speaking with online dating expert Julie Spira, who wholeheartedly advocates geographically expanding your search for love, I've taken the plunge and updated my OkCupid location settings to "anywhere."

Still got questions about the whole casting-a-wide-net approach? Here are some I once had and the answers I've arrived at.

1. How Do You Fall For Each Other Without Even Meeting?

It might seem incredulous that someone could be willing to cross the state, country, or world to meet someone they've never spoken to in real life. But given all the long-distance modes of communication available to us now, the definition of "real life" has expanded.

"We developed feelings just by talking about politics, reading the same books at the same time, and texting and Facetime," says Rosemary, who knew she was in love with her boyfriend before they even met in person.

Sometimes, you can just tell someone's right for you before even speaking. "I knew just by reading her profile that this was someone special... There was just something about her that resonated on a deep sub-conscious level,"says Joe*. "We both knew there was something incredible waiting to happen between us. It was just a case of how long it was going to take to make it reality." Emma* agrees: "We had been writing and speaking for months before I decided to visit. Our relationship developed so naturally and felt so effortless. We knew a lot about each other before we met for the first time. I did my research, and everything he told me checked out... I had no doubts about meeting him, but if anything, I had been dying to see England!"

That's another plus: Even if the relationship doesn't pan out, you'll get a fun trip out of the first meeting.

2. Why Not Just Meet People In Your Own City?

It may seem more convenient to date people closer to you, but that's sometimes easier said than done. Some people just aren't feeling it with the people in their own region. "NorCal women I had a hard time connecting with," Peter tells me. Not to mention, meeting people compatible with you is difficult enough to begin with. Emma* had suffered through "a string of cringe-worthy first dates and all too many insufferable messages" when she got Joe*'s first correspondence. "I was struck by how articulate and charming he was," she says, and their match percentage was in the high 90s. "It occurred to me that it didn't really matter where in the world he was, but that he actually existed."

For others, particularly straight people, there may be a ratio problem. In Manhattan, for example, there are about three straight, single, college-educated women ages 22 to 29 for every two men, according to Date-onomics: How Dating Became a Lopsided Numbers Game by Jon Birger. "There's no question that if you live in a city like Ft. Lauderdale, the gender ratios for women are so bad that women might want to expand their date search to other cities. Conversely, men who live in San Jose (aka 'Man Jose') might want to consider something similar," Birger said, adding that a less extreme solution might be for women to look in the suburbs surrounding their city, where more men tend to settle.

Learning about gender ratios was the straw that broke the camel's back in my decision to expand my location settings. New York's dating market is awful for women. Eligible bachelors not only are few and far between but also get to act entitled due to their scarcity, since women can appear disposable. But if I'm open to meeting someone who lives in Silicon Valley, where women are a commodity, I may find not only more options but also more appreciative partners.

Expanding location settings also lets people find the best person in the world for them, not just the best in their region. "I think that singles have to cast a wide net and when it comes to love," Spira says. "There shouldn't be any barriers. If you're only hoping to meet somebody who lives in your neighborhood, you're really leaving the opportunity for deep love on the table."

After all, of all the qualities that make someone a good partner, where they happen to live doesn't rank very high for most people. It's a limitation we place on our pool of options due to convenience. But dating someone far is away is not as inconvenient as it used to be.

Most people I interviewed who entered relationships with people more than just a few hours away expected one of them to move at some point. "Knowing that distance isn't a permanent thing has been really important in our willingness to move forward," said Andrew, who added that his relationship "has been privileged by my ability to see my boyfriend in person."

Spira recommends meeting up regularly, communicating throughout the day with "good morning" and "goodnight" texts, and making Skype dates to help long-distance relationships last. "Have a digital date, grab a glass of wine, put on lipstick, put on a date outfit, and chat about what you would if you were sitting in a restaurant," she advised. "Don't go days in between communicating. If you don't nurture it, it will go away."

Spira's advice comes with one disclaimer: She doesn't recommend meeting when you're so far away you're not able to meet up. "You don't want to get caught up in the fantasy of having a boyfriend or girlfriend if you haven't met them," she said. She recommends that those hesitant to travel "start within 100 miles where it's easier to develop a real regular schedule." That said, she has seen many couples last after meeting online while they lived far away.

"Life is too short," says Emma*. "I know too many people whose relationships are based on convenience, rather than love."

"The fact that I'm now in a different country with an incredible woman and an awesome step-daughter with new friends and incredible opportunities goes to show how amazing broadening your horizons can be," Joe* adds. "Even if you meet people who become friends or pen pals, you now have friends who you can stay with during a trip to an exotic country."

The Internet has enabled a lot of things over the past few years that weren't previously possible. One of these is the ability to connect with others all over the world. Gone are the days of dating and marrying within one's community. With the power of online dating, Skype, and planes, the only hard limitations on who we can date are the ones we impose on ourselves. We have more options than ever, and it's time we exercise them by expanding our search to find our best matches in the world.