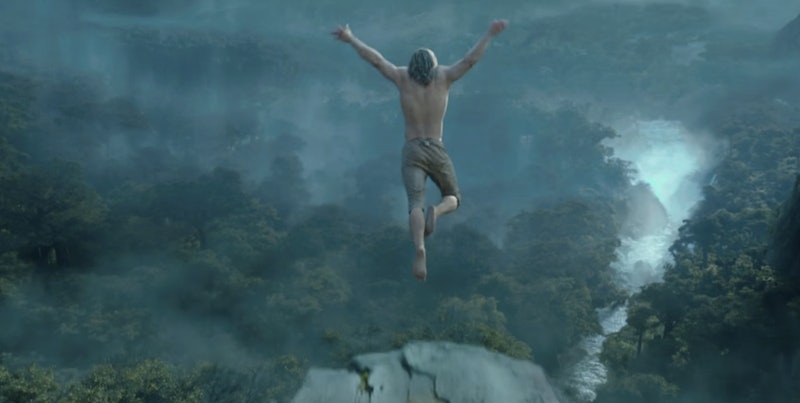 If those steamy photos from the upcoming Alexander Skarsgård- Margot Robbie-starring The Legend of Tarzan weren't enough to get you completely and totally pumped for the release of this movie, two things: One, how?! And two, good news, this will totally do the trick. Warner Bros. Pictures just did fans a solid and dropped the first real trailer for The Legend of Tarzan too, probably because they knew it totally was not going to be enough for fans (at least, I know it wasn't going to be enough for me) to just stare at Skarsgård motionless in photos. We need to see him in action! And him in action is exactly what we see in this trailer — Skarsgård is so on point as the classic character, it's almost enough to make me forget about any other adaptations of the story before this one.

The trailer, of course, doesn't just feature Skarsgård — the whole cast is present, including Robbie as Jane (looking captivating as she always does, because she is Margot Robbie), Christoph Waltz as Captain Rom, Samuel L. Jackson as George Washington Williams, and a whole lotta apes. No, like, seriously — I get Tarzan was raised in the jungle and they'd be around, but it's literally like Planet Of the Apes up in here. I get the feeling this is going to cause some drama...

Anyway, you can check out the action-packed trailer below. The Legend of Tarzan will hit theaters on July 1, 2016.