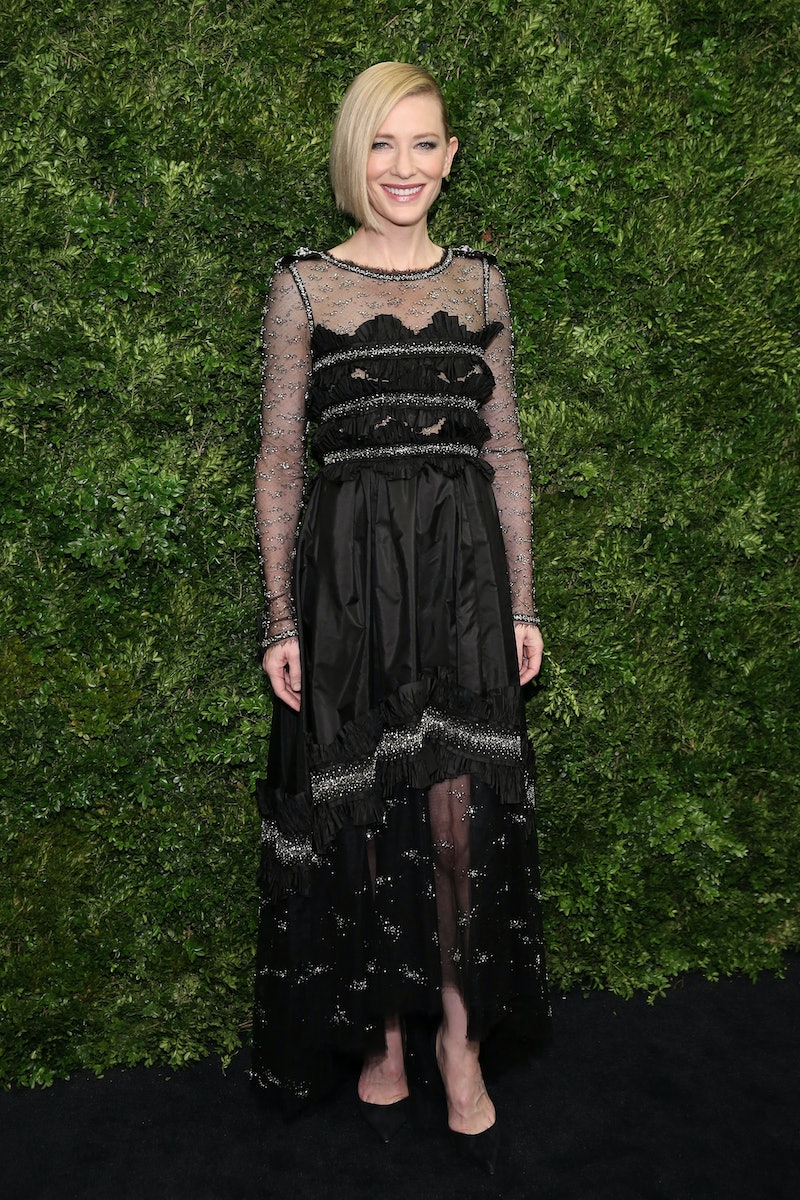 The 2016 Golden Globes nominations have finally arrived, and major congratulations are in order for a certain actress. Cate Blanchett snagged a nomination for the highly coveted Best Actress category, but there's really no surprise there, TBH. The award-winning actress has achieved countless accolades for her many riveting roles in films like Blue Jasmine and The Aviator, but her portrayal as one half of a lesbian couple in the movie Carol has got to be one of her best performances yet. With the anticipation of such a big honor, only one question remains — what will Blanchett wear to the 2016 Golden Globes? The forecast reads something majorly luxe and high-fashion.

Throughout her nearly 20-year career in Hollywood, Blanchett has made a name for herself as quite the fashionista. She always managed to set herself apart from the rest, constantly pushing the fashion envelope in cutting-edge designs that always possess that wow factor. Just these past few months alone she stepped out in a parade of drop dead gorgeous looks that came straight off the latest runways, including a silk and lace Givenchy jumpsuit and a Proenza Schouler midi dress.

My guess is that she will opt for something hot off the Spring 2016 runways. The Golden Globes are pretty formal, so she will probably go for something super elegant and regal.

Perhaps this Spring 2016 Givenchy ball gown? It's got lots of drama and a particularly majestic feel, and we know she loves Givenchy.

Clearly, she is a fan of black gowns.

Or maybe she will choose this Spring 2016 Marchesa gown?

It doesn't get more fashion-y than this. The pastel hues would look gorgeous on Blanchett's complexion, and we know she is a fan of soft colors, like this dress she wore to the 2011 Oscars.

This is one of my all time favorite red carpet dresses.

My last prediction is something elegant with lots of beading, like this Spring 2016 Delpozo look.

Blanchett has worn many beaded gowns on the red carpet.

This Oscars 2014 gown was covered in intricate beadwork and looked super ethereal on her.

It's a toss up between black, beaded, and pastel, but whichever gown she chooses, I know it will surely be breathtaking.