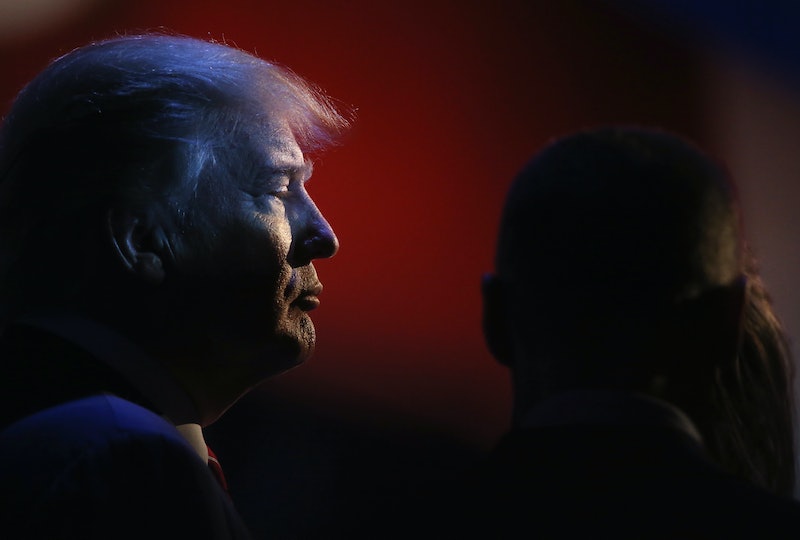 A few months ago, he was just an absurd joke that wrote itself, and it was easy to laugh off his delusions of becoming president. But nobody's laughing anymore. Donald Trump has gone from eccentric real estate tycoon and reality TV star to a budding fascist who is, disconcertingly, still somehow dominating the polls. In other words, the time to laugh at him has passed. He must be stopped. Sure, that's the central mission of the other 2016 candidates, certain media outlets, and even his own party, but we as individuals can help contribute toward this crucial goal. There are numerous, easy ways to boycott Trump.

Remember once upon a time, when the worst thing Trump said was that the Mexicans who come into the United States are rapists and criminals? Then he made that disgusting comment alluding to Megyn Kelly's menstrual cycle? It was all shocking and offensive, but still harmless enough that we could talk about it in jest. And it was still early enough in the election cycle that none of it carried real weight. But as the end of 2015 approaches, Trump is starting to look unshakable, and what's worse, he's now dangerous. On Monday, Trump issued a release proposing a total ban on Muslims entering the United States.

Trump's one-man circus show is no longer cute. It's time we stood up against him, because we can. If you're with me, here are five ways you can help stop Trump's evil influence from spreading any further. If some of these examples don't apply to you, then tell your friends, your family, your conservative uncle — spread the word!

Don't Stay At His Hotels

There's an empire of hotels all around the world, from New York City to Panama to Ireland, which all have one thing in common: They're owned by a misogynistic bigot. Don't stay in them.

Don't Play On His Golf Courses

An avid golfer, Trump has also built more than a dozen gaudy golf courses from New Jersey to Scotland. If you're into golf — no judgment — just choose a non-Trump course.

Besides overpriced luxury hotels and golf resorts, Trump has hocked a wide range of random products, from apparel and fragrances to board games and steaks. Not that you were going to anyway (hopefully), but don't wear his lilac button-down shirts or drink his highly suspicious natural spring water.

If you happen to already own some of his crap — no judgment — and you've come to see the light about Trump, then unload it on eBay. Now that Trump's more famous than ever, your items will probably fetch decent prices. Then, promptly donate the proceeds to someone else's campaign (but not Ted Cruz's).

As you probably know, Trump practically lives on Twitter. So inundate him with tweets. Like Trump, you should make sure to avoid any semblance of logic (and, of course, any sort of abuse). Instead, you should send him irritatingly innocuous things, like that video of the dramatic chipmunk or recipes for fruit cake. And get your friends to do it too, so you can spread out your efforts. Have fun!