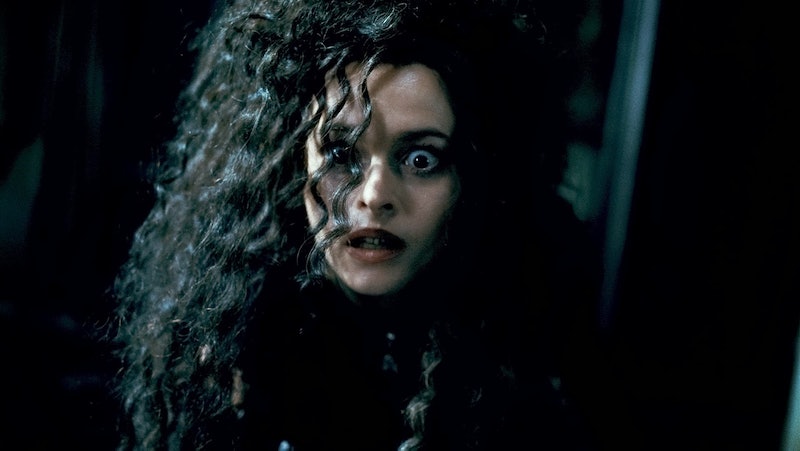 Ever wonder if you've got the chops to be the next Voldemort? While I certainly hope not, it turns out you can get some indication re: your Dark Lord destiny by taking a dark triad personality test online. The BBC created the test using actual psychological research examining three indicators of "dark" personality: Machiavellianism, narcissism and psychopathy. While this test is in no way meant to be an actual medical diagnosis, it does give some fascinating insight into what makes someone's personality "dark," and the things they are willing — or unwilling — to do to achieve their means.

The "Dark Triad" personality is a term that emerged relatively recently among personality psychologists. A person who demonstrates the characteristics of the Dark Triad is often manipulative, unsympathetic to others, and thinks they are deserving of admiration. It might be easy to recognize some of these traits in other people, but how can you objectively examine them in yourself? This quiz asks a series of simple questions, each meant to measure a different part of the triad, to give you a measure for the Machiavellian, narcissist and psychopathic traits you embody — as well as an overall measure of how ~evil~ you are.

The key to this is answering as honestly as possible. Yes, it's true that you could find a way to easily manipulate the answers to these questions (HOW MACHIAVELLIAN IS THAT?!), but there's no reason to hold back. Who's going to see the results aside from you? (Unless you're me, and perhaps foolishly publishing your results for the world to see. Hey, Mom!)

The first round of questions is meant to measure how Machiavellian you are. The word first cropped up as early as 1626 and gained momentum, an adjective meaning "Cunning, scheming, and unscrupulous, especially in politics or in advancing one’s career." It was inspired by Niccolò Machiavelli, the Italian politician and philosopher responsible for the phrase "the ends justify the means"; he wrote a book called The Prince extolling ruthlessness, manipulation, and ultimately serving oneself in politics.

In psychology, the term identifies someone who is unusually manipulative, and willing to use other people to achieve their means, regardless of the social cost or consequences the people being manipulated will suffer.

The questions are all presented in this format: you are given a statement, to which you can either remain neutral, or agree or disagree with to two different degrees. Once you finish the first section, you'll move onto another battery to test the next part of the Dark Triad — which brings us to ...

The second round of questions examines how narcissistic you are. Narcissism alone is defined as "excessive or erotic interest in oneself and one's physical appearance". Likely we have all heard the story of how Narcissus fell in love with his own reflection and, unable to tear himself away, drowned (Instagram saves lives, y'all). In psychology, Narcissistic Personality Disorder is defined by a person's unshakeable belief that they are "special," or more important than other people; they have a thirst for admiration, and are unable to relate or empathize with other people. They frequently come off as arrogant or cocky. Whereas people tend to believe that narcissists are insecure ~deep down~, research indicates that their inflated sense of self-importance is every bit as prevalent on the inside as the outside.

This battery of questions revolves around those deep-seated psychological beliefs, and quite honestly is about as aggressively Perry Cox as it gets. But this is only one of two factors that make up the dangerous personality triad the quiz tests — and the last one is arguably more sinister than the first two combined.

We may jokingly call people we don't agree with "psychopaths," but that doesn't psychopathy any less of a genuine and scary diagnosis. Rounding out the Dark Triad, one could argue that this is the most dangerous of the three elements, the poison laced on the already double-edged sword. It is one of the most difficult disorders to diagnose, as people with psychopathy are generally charming and well-practiced in seeming "normal" and sensitive; people are not expecting that secretly they lack empathy or even a conscience, the two most important factors in regulating our behaviors. Since they don't experience these emotional roadblocks, they are impulsive, bold, and may be unafraid to commit callous or violent acts.

These questions, unlike the other two sections, are a lot more straightforward — you'll be able to agree or disagree to a much quicker degree than you would on the others, which are to some degree situationally dependent. Now imagine a person able to agree with the blatant, black-and-white statements that put you in the "wrong," and then scoring high on tests that indicate a dangerous sense of self-importance and cunning to manipulate. Terrifying, right?

I am relieved to find on this day that I am not, in fact, a psychopath. I suppose I'm not entirely surprised that I scored a smidge above neutral on the other two, but I wonder if I could argue that some of these questions are situational, and some are just objective answers — for instance, if I agree that people can be easily manipulated, for instance, am I just saying that I have observed it happening, or implying that in noticing that I have acted on it? If you agree with insisting on getting the respect you deserve, does the quiz automatically overreaching on that level of respect, or are you in real life asking for reasonable, basic respect from people around you as a fellow human being?

It would be interesting to test this out by taking a longer battery of questions, but this one is snappy, convenient, and still manages to give you some very intriguing results. You can take the test yourself here.

Now if you'll all excuse me, I'm very busy being infrequently vile around my office. DUTY CALLS.

More like this
These 3 Signs Are The Master Chefs Of The Zodiac
By Kristine Fellizar
These 4 Zodiac Signs Make The Best Bridesmaids
By Nina Kahn
The Zodiac Sign Pairs Most Likely To Have A Sibling Rivalry
By Kristine Fellizar
5 Signs You Have A Toxic Relationship With Yourself
By Lexi Inks
Get Even More From Bustle — Sign Up For The Newsletter
From hair trends to relationship advice, our daily newsletter has everything you need to sound like a person who’s on TikTok, even if you aren’t.