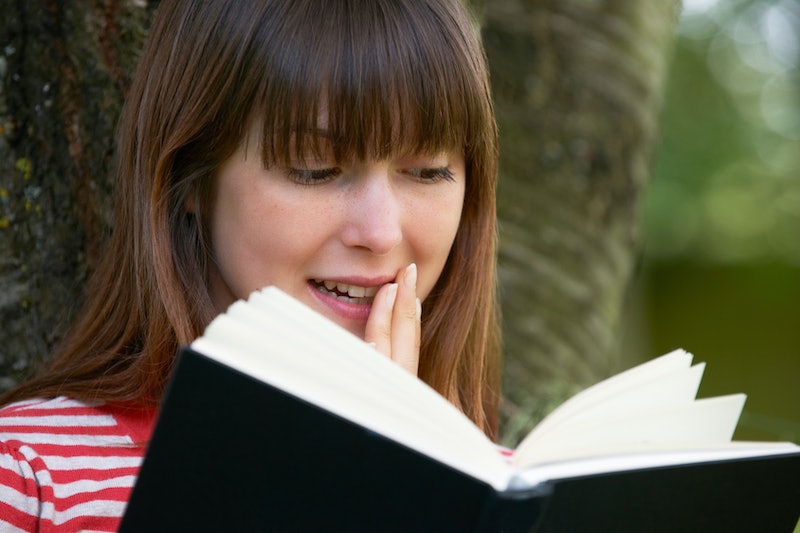 There are certain people we just don't want to think about as sexual beings. Like, you know, our parents, our grandparents, and our beloved children's book authors. I mean, of course everyone is entitled to a private life — but it's a lot to wrap your head around when the author of The Giving Tree was also published in Playboy (for over 40 years). Some authors just come across as so wholesome or uptight, it's hard to imagine them ever writing (or in some of these cases, drawing) anything racy.

But quite a few authors who seem perfectly G-rated (or PG, at the most) have some wildly risque writings to their name. There's nothing wrong with a well executed steamy scene, but it can come as a surprise when you go in expecting one of your favorite kiddie authors and find things that are definitively unsuitable for children. It's even a surprise when you find a new book by one of your favorite adult authors, and it turns out that they have way fewer inhibitions than you thought.

So if you ever wanted to read a book about sex and drugs by the author of Little Women, you're in luck! And if not, well... here are nine secretly sexy authors to watch out for.

I don't know which is weirder, the fact that Dr. Seuss wrote (and illustrated!) a book about sexy nudist ladies for adults, or the fact that he wrote it under the name Dr. Seuss. Why not write it under his real name, Theodore Geisel? You know, so that that kids don't accidentally read it? The Seven Lady Godivas is a story about the seven Godiva sisters, who never wear clothes, and decide not to marry any of their boyfriends until they can learn the dangers of horseback riding. That's the plot. And none of it rhymes.

Everyone loves Little Women. Sisterhood! Ice skating! Pickled limes! What's not to like? But Louisa May Alcott wasn't all about cutesy family time and morals. Modern Magic , a collection of some of her short stories, focuses more on charming topics like drugs, mind control, black magic, and sex. So if you finished Little Women and thought, "Hmm, I liked the early feminist themes, but where where all the femme fatales and hypnotists?!" then this is the book for you.

Roald Dahl brought us Willy Wonka, the BFG, a giant flying peach, and Uncle Oswald, the "greatest fornicator of all time." My Uncle Oswald is Roald Dahl's obscene sex romp about roguish Uncle Oswald and how he "seduces" people by slipping them drugs. Um. It's not exactly chocolate factories and talking foxes. Uncle Oswald is also a character who appears in Switch Bitch, which is the name of another book by Roald Dahl (and yes, that one's all about dark and disturbing sexual experiences, too).

The guy who wrote Where the Sidewalk Ends also wrote for Playboy. For more than 40 years. He also drew some rather naughty cartoons for them. And he also wrote several skits and scenes aimed at adults, but with his signature absurdist take on the world. One skit, for example, is about a woman being assaulted, murdering her assaulter, being arrested, and finally tried and executed. But the only dialogue is the phrase "meat and potatoes" repeated over and over again. Another scene has a woman being auctioned off for "lifetime use." Yikes, Shel Silverstein.

Diana Wynne Jones is famous for her wonderfully inventive young adult books, such as Howl's Moving Castle and the Chrestomanci series. Most of them are about young people coming to terms with their magic powers and growing up. Adorable! And then there are books like A Sudden Wild Magic , which includes the phrase "kamikaze sex." It's not exactly a book of erotica: it still has her signature blend of magic and female heroism. It's just that it also involves "kamikaze sex" (and yes, the heroine wins by literally sleeping with the enemy).

Daniel Handler is often cited as Lemony Snicket's "handler," but sources suspect that the two men may, in fact, be one and the same. (We won't kill the dream yet.) However, while Lemony Snicket writes books about unfortunate orphans and mysterious organizations, Daniel Handler writes books about opera and sex. Such as Watch Your Mouth , which still has all the rapier wit of Lemony Snicket's books. It's just that it also has a lot more sex and family drama (and opera).

Well, maybe it's not so shocking that Mark Twain dabbled a bit in the risque. But if you read Tom Sawyer and Huckleberry Finn back in the day, you probably have a certain idea of what Mark Twain's fiction is like. And then there's 1601, a short fictional diary from a lady in waiting to Queen Elizabeth I, describing a conversation between the queen and the most renown Elizabethan writers. And almost all of the conversation is about sex and/or farting. Classy.

When H.G. Wells wasn't writing about invisible men, time machines, and martians, he was writing about (what else?) his nonfiction predictions for the future. In Anticipations of the Reaction of Mechanical and Scientific Progress upon Human Life and Thought he predicts that in the future, all morals will vanish and men and women will have total sexual freedom (although apparently he did not predict that books with ridiculously long titles would fall out of fashion). In his own autobiography, he also touches upon some of the wild affairs that he had in his own time: he had an open marriage with his wife, and his various girlfriends included spies, adventurers, feminist writers, and birth control activist Margaret Sanger. He didn't exactly write bodice rippers, but he most certainly wrote about sex.