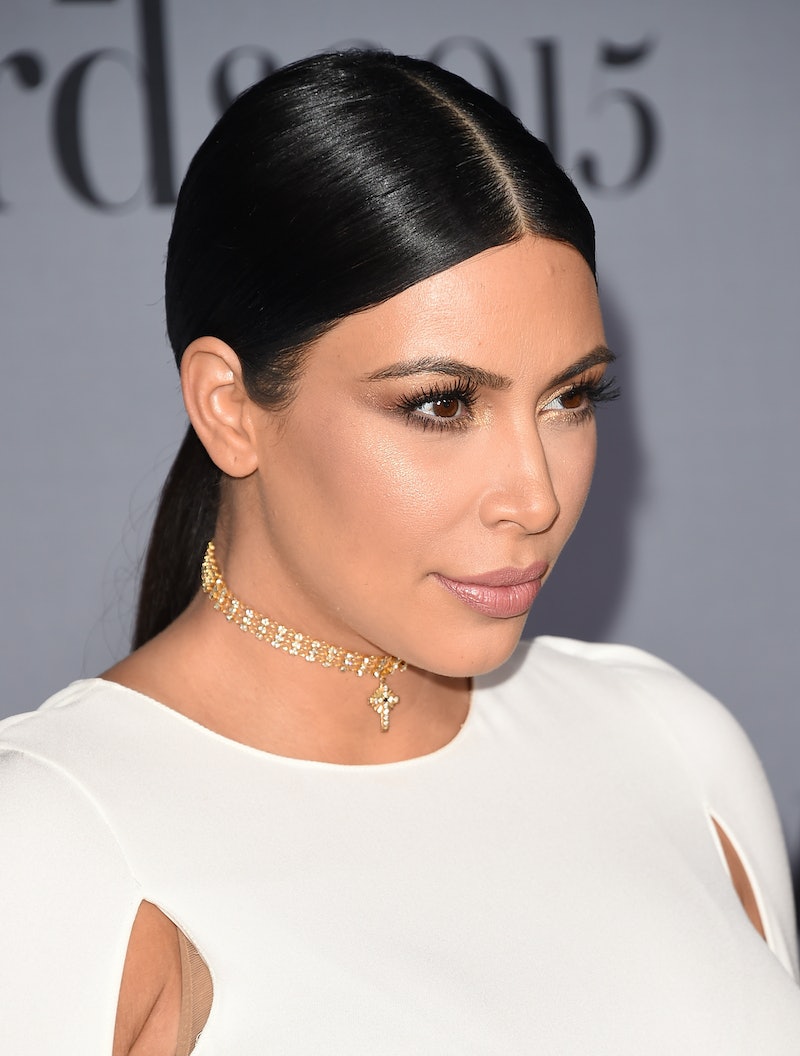 It sounds like one Kardashian had a philanthropic evening. Kim Kardashian offered to donate 1,000 pairs of shoes to the charity Soles For Souls, which was highlighted on the commentary show Dish Nation, which Kardashian happened to be watching on Wednesday night, according to the reality star's Twitter. And, well, the rest is history.

Soles4Souls was founded as a disaster relief charity after the 2004 Indian Ocean Tsunami hit Indonesia, according to the organization's website. With help from shoe companies and philanthropists, the organization focused on getting proper footwear to those who suffered from the natural disaster. Tweeting that she "knows the designer of Shoe of the Year Award," Kardashian seemed to be implying that she planned to donate Yeezy Boosts to the cause. I have no doubt that the girl featured on Dish Nation, who was reportedly asking for help giving back to Soles4Souls, since the charity helped her through Hurricane Katrina, was overjoyed.

It's nice that the couple went out of their way to donate to a charity, especially with their hands full with a newborn baby. But would you have expected it any other way? The couple made it happen in the utmost Kardashian-West way. It was certainly a generous gesture.

This isn't the first time Kardashian has used her powers for good. Here are five other times she's played the part of philanthropist.

Earlier this year, Variety named Kardashian a Power Of Women New York Honoree, focusing on her work at the Children's Hospital in Los Angeles. The outlet reported that she began working with the hospital seven years ago and since then has donated proceeds from her eBay store, as well as made time to visit patients on a regular basis.

According to US Weekly, Kardashian asked for donations instead of baby shower gifts to the Lurie Children's Hospital in her husband's home town of Chicago when her first child, North West, was born.

Selling pieces she's worn in the past, from Zara jumpsuits to Balenciaga handbags, Kardashian's eBay auction donates a percentage of proceeds to various different charities, currently VOUS Church in Miami, FL, a church geared towards young adults. While it's worth noting that it's only a percentage and not the whole profit, any donation helps in some way.

Back in 2011, after Kardashian announced her divorce from basketball player Kris Humphries, Kardashian donated the equivalent of all of her wedding gifts to the Dream Foundation, an organization that grants wishes to adults with life-threatening medical conditions. TMZ stated that a source estimated the value being close to $200,000.

Last year, the Kardashian family visited an orphanage in Phuket, Thailand while on a family vacation. The whole vacation was taped for Keeping Up With The Kardashians, including when the family spent a few hours making art and playing games with the children at the orphanage.

Want more Kardashians? Check out the video below, and be sure to subscribe to Bustle’s YouTube page for more hacks and tricks!

More like this
Most Comfortable Underwear For Big Butts
By Audrey Williams
Kim Kardashian Pays Homage To Kanye West’s Fave Film In New Swimwear Pics
By Bustle Editors and Maxine Harrison
Are Skater Shoes the Next Y2K Trend to be Revived by Gen Z?
By Lauren Alexis Fisher
The 11 Best Front Closure Bras For Big Boobs
By Maria Cassano
Get Even More From Bustle — Sign Up For The Newsletter