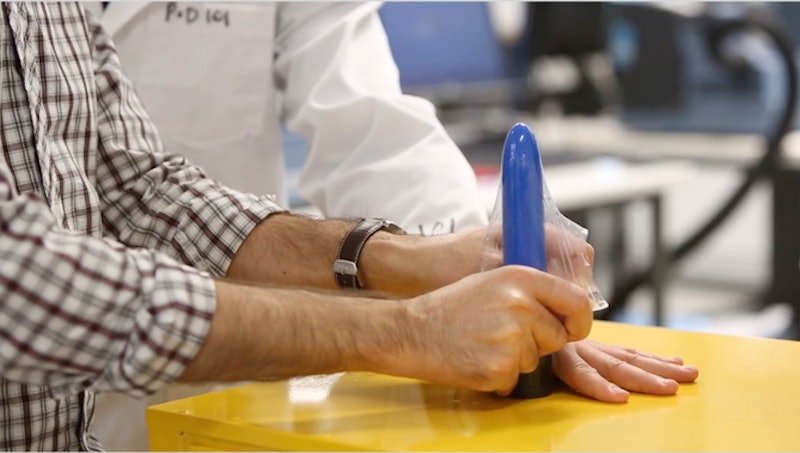 GELdom, which sounds like a squishy Dominant sex robot that will order you around for sexual pleasure, is the "next generation" condom promising increased pleasure whose research is being funded by the Bill and Melinda Gates Foundation. Researchers at the University of Wollongong in Australia are using dat Microsoft money to develop a latex-alternative condom made of something called tough hydrogel, which is designed to feel more pleasurable to the wearer.

As science has already shown us: loss of erection is not the condom's fault — it's a combination of erectile dysfunction and men not learning how to properly apply condoms in sex ed. But ED and poor sex ed aside, most folks are familiar with the old "it feels better without one" excuse promulgated by men trying to weasel their partners out of a safer sex experience. Rather than educate dudes on seeking treatment for their underlying erectile dysfunction, or lobbying for better sex ed, the Bill and Melinda Gates Foundation decided to funnel $100,000 into nicer feeling condoms. Sigh. OK then. Here's what you need to know about tough hydrogel:

"Tough hydrogels are a suite of materials that are more skinlike, so they can be made to act, feel, and look more like real skin," says project lead Dr. Robert Gorkin.

In fact, researchers did a study in which participants did a "touch test" with five different materials, including lubricated and non-lubricated latex, along with tough hydrogel, and brain scans showed a pleasure response when touching the hydrogel. Added Swinburne University cognitive neuroscientist Joseph Ciorciari, "We also got a perceptual novelty response, as in 'oh that's different, I want to feel more of that.'"

Tough hydrogels are made of water held together polymers. It's what makes them feel wet, soft, and self-lubricated to the touch.

3. They Could Be As Protective As Latex

Aside from its problematic pleasure focus, the team behind GELdom is doing some cool community work exploring the stigma and cultural attitudes of condom use in areas of Sub-Saharan Africa and Southeast Asia, where aversion to condoms is high and HIV proliferates. The team seeks to motivate condom use worldwide, exploring the reasoning behind reluctance to use them that goes beyond simple pleasure.

Unsurprisingly, the research team is five-sixths male, which probably means that, if GELdoms take off, then in 50 to 100 years, we could have research on how they actually affect vaginas.