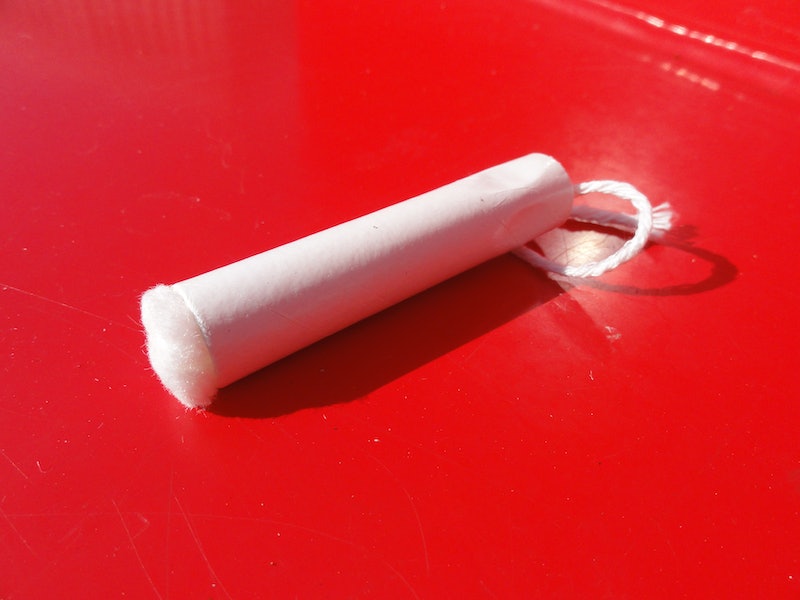 I remember shaking in the bathroom when I finally got my first period at sixteen, calling up my best friend who'd used tampons for years. How did she get it to go in? How was it supposed to fit up there? Could it get stuck? Though they were a normal part of life for most women, my sixteen year old self wondered if using a tampon was safe.

In the ten-plus years of menstruating since then, I stopped worrying about tampons, and have come to rely on them so that I can stay just as active and skinny jeans-clad during my period as I am during the rest of the month. But after editing more than a few articles about the health and environmental benefits of using organic tampons and menstrual cups, I realized that there might have been more to my youthful tampon anxiety than I thought. The safety of tampons and other feminine hygiene products just may be the biggest women's health issue no one is paying attention to.

Here are seven reasons why we should all care more about what goes into our tampons, pads, and other menstrual products.

1. Ingredients In Tampons And Pads Aren't Nearly As Regulated As They Should Be

It may seem unbelievable that the FDA doesn't regulate the ingredients used in feminine hygiene products, but since sanitary pads are considered a "medical device" by the FDA the ingredients don’t have to be listed on the label or disclosed by the company. As for tampons, they seem to exist in a sort of unregulated zone.

"The FDA does require that claims on the packaging match the performance of the product," Alvandi tells Bustle. "I've actually seen the machine used to test absorbency, it's really cool. [But] there are no regulations around ingredients, really." While many brands of tampons do list some of the ingredients on their package, full disclosure still isn't mandatory.

2. Your Vagina Is Very, Very Absorbent

It isn't hard to imagine that our vaginas quickly absorb any chemical placed inside them — just think about the effectiveness of hormonal birth control rings, or the trend of vodka-soaked tampons. But why exactly is it so easy for chemicals inside our vaginas to be absorbed into our bodies?

"Vaginal tissue is lined with permeable mucous membranes, which protect the body from bacteria, but which can also easily absorb or be irritated by other chemicals," explains Alex Scranton, director of Science and Research at Women's Voices For The Earth, a group that advocates more research into menstrual products' safety, on the group's blog. These vaginal membranes are filled with blood vessels, which allow any chemical they are exposed to to be easily absorbed into your bloodstream.

"Studies have shown that hormone chemicals, like estrogen especially, will be absorbed vaginally at 10-80 times the rate that the same dose would be absorbed orally," notes Scranton. So it isn't hard to believe that any pesticides and chlorine present in the cotton used to make your tampon would be quickly absorbed through your vagina, too.

3. Pesticides Are Probably Not The Best Thing To Insert Into Your Vag

You make sure to only buy organic blueberries, but what about the pesticides on the cotton or poly fibers used on your tampons? Yes, the materials used to make your tampons are often farmed using harsh pesticides and chemicals — and those may be absorbed into your body when you use tampons, too.

Women's Voices For the Earth has found that a wide variety of chemicals and pesticides can contaminate the cotton used in popular brands of tampons — including procymidon and piperonyl butoxide, which the EPA has determined to be a "probable human carcinogen.” But shockingly, there has so far been no significant scientific research into what risks women might be exposing ourselves to when we expose our vaginal tissue to these chemicals.

4. We Don't Know The Longterm Effects Of Chlorine Bleaching Chemicals On Our Bodies

Ever wonder why some natural tampon companies brag that they're "chlorine-free?" Well, that's because the chlorine bleaching process used on the cotton that ends up is most tampons and pads concerns many environmental and women's health advocates.

"Chlorine is used to whiten and disinfect raw materials, but it leaves behind these dioxin residues in the fibers of the tampon. Dioxins are carcinogens [which are] cancer-causing agents," Alvandi explains. (They've also been linked to abnormal tissue growth, immune, hormonal, and endocrine system disruption.) "So when we pull a tampon outside of our body, [small parts of] these fibers [on the tampon] sometimes break off and hang outside our vaginal canal. These fibers can create a breeding ground for bacteria, and that's where Toxic Shock Syndrome can happen."

And don't think that chlorine bleaching is the only sterilizing option — most companies actually choose it due to its low cost. "Organic tampons are also bleached, but they're bleached with hydrogen peroxide, which is a natural bleaching agent that doesn't leave behind any carcinogenic materials. It's more expensive — that's why other [companies] don't do it," Alvandi says.

Modern feminism isn't just about things that directly and specifically impact women — rather, intersectional feminism focuses on all different forms of oppression, which means that the environmental impact of menstrual products on the world at large is a feminist issue. And that impact is major.

Organic or not, tampons create a huge amount of waste. (Just one of the many benefits of considering a menstrual cup instead.) The average woman uses 11,000 to 16,000 tampons in her lifetime, Alvandi says. "[Those] are being thrown into the garbage, filling up our landfills. A lot of times, these are products with plastic applicators, so obviously plastic doesn't biodegrade so easily."

And the sheer amount of waste created isn't the end of the environmental havoc wreaked by the tampon industry. "The whole chlorine bleaching process also falls into our ocean, killing wildlife there," Alvandi stresses. "And of course, the use of pesticides to grow cotton can also have an affect on our air quality and environment."

The health blog Naturally Savvy estimates that "by using plastic laden feminine hygiene products, we add the equivalent to 180 billion plastic bags to our waste stream." Clearly, the most environmentally-friendly choice is to use a menstrual cup, but if that's not the option for you, using organic products with cardboard applicators (or better yet, no applicator at all) is your most environmentally-friendly option.

6. You Probably Want To Avoid Putting Plastic In (Or Under) Your Pussy

My friend Shannon used to say of traditional tampons, "Get your plastic away from my pussy." And when it comes to feminine hygiene products, there sure is a lot of plastic to get away from: by one popular estimate, the average pad contains the same amount of plastic as four plastic bags.

And all that plastic isn't just wasteful — exposing our vaginas to it might have an effect on our health. "Chemicals like BPA and BPS disrupt embryonic development. They're linked to heart disease and cancer. Phthalates, which give paper tampon applicators a smooth finish, are known to disregulate gene expression, and DEHP may lead to multiple organ damage," Dr. Joseph Mercola writes for The Huffington Post. "Synthetics and plastic restrict air flow and trap heat and dampness, potentially promoting yeast and bacteria growth in your vaginal area." Whether you're using pads or tampons, that's all the more reason to give your vag room to breathe.

7. There's Been Shockingly Little Research Into All Of This — Yet Congress Refuses To Act

According to activists pushing for more research into feminine hygiene product safety, there simply isn't enough data out there on how these products affect women's bodies. Congresswoman Carolyn Maloney (D-N.Y.) has been trying to change that ever since she introduced The Robin Danielson Feminine Hygiene Product Safety Act, a bill named after a woman who died from Toxic Shock Syndrome. The act demands independent testing of all feminine hygiene products by the National Institutes of Health, and that their findings (as well as all ingredients used in the production of pads and tampons) be made public. Maloney has tried to pass the legislation in Congress an infuriating nine times over the last 13 years.

That this level of testing and scrutiny isn't already required of menstrual products is, in my opinion, downright absurd. How is Congress OK with not assessing the safety of a product that almost half of the population uses every month?

Luckily, Maloney reintroduced The Robin Danielson Feminine Hygiene Product Safety Act again last month, so you can sign a petition, or even better, find and call your local congressperson and tell them to pass it. It's time we knew exactly how safe these products are — and what's in them.

More like this
How Ovulation Affects Your Sense Of Smell, Libido, & More
By JR Thorpe and Lexi Inks
The Case For Following A Menstrual Cycle Workout Plan
By Emma McGowan and Carolyn Steber
15 Black-Owned Liquor & Wine Brands To Add To Your Bar Cart
By Alexis Morillo
An Expert Weighs In On The Viral Raw Carrot Salad Trend
By Alexis Morillo
Get Even More From Bustle — Sign Up For The Newsletter
From hair trends to relationship advice, our daily newsletter has everything you need to sound like a person who’s on TikTok, even if you aren’t.