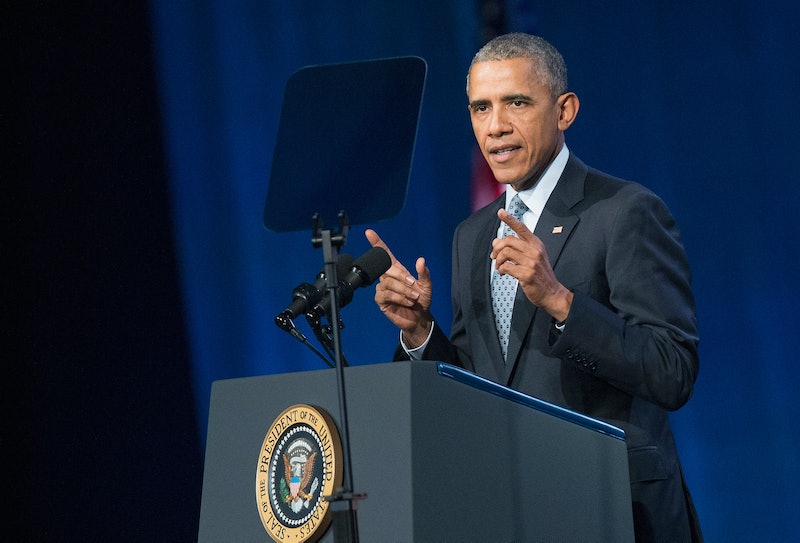 One of President Barack Obama's top aides said the White House is finalizing an executive action on gun policy for the country, according to the Associated Press. The plan would expand background checks on people purchasing guns and it would not require congressional approval. But will such an action actually be implemented? An executive action will bypass Republicans in Congress who would want to stop the law. But, still, The Hill noted that it will almost certainly face a legal challenge from gun rights groups who say that Obama doesn't have the authority to tighten background checks.

Obama's executive action would take effect regardless of whether gun rights groups actually agree with it. But like Obama's executive action on immigration, a federal appeals court would be able to uphold an injunction issued by a lower court, which would prevent the law from taking effect in states that sue the government, according to Vox. However, that means that gun rights groups would have to come up with a compelling argument that Obama either didn't follow a specific procedure correctly, that that law is unconstitutional, or that Obama doesn't have the authority to pass such a law in order for a court to issue an injunction.

It's unclear whether gun rights groups will have strong enough arguments against Obama's executive action. The changes Obama's executive action would enact would classify more gun sellers as "high-volume dealers," which would close a loophole that allows online gun sales or sales at gun shows to circumvent provisions that require background checks, according to the Hill. Right now, federal law states that those "engaged in the business" of dealing firearms must obtain a federal license to do so and must conduct background checks, according to The Washington Post. Obama's executive action would make it so that anyone who is part of "occasional sales, exchanges, or purchases of firearms for the enhancement of a personal collection or for a hobby, or who sells all or part of his personal collection of firearms," would also have to conduct background checks.

Obama has been considering the executive action since October, when a shooting at Umpqua Community College left nine people dead, the Post reported. In 2013, Congress rejected similar legislation that would've expanded background checks, even though Attorney General Eric Holder Jr. said the legislation was "legally defensible."

But, of course, the National Rifle Association doesn't agree. Jennifer Baker, a spokesperson for the NRA, told the Post that a widow selling her late husband's gun collection would be caught by the law, though Baker didn't say why the widow shouldn't have to conduct background checks in that instance to ensure safety:

People who repeatedly sell large volumes of firearms are already covered in the current statute because they are already defined as "engaged in the business."

Many gun rights advocates also argue that enhanced background checks won't stop criminals because criminals don't obey laws anyways. But Daniel Webster, a leading expert on gun violence and the director of the Johns Hopkins Center for Gun Policy and Research, told the Post that that the common anti-gun control argument is faulty, because, by its logic, we wouldn't expand any laws simply because criminals won't obey them:

The illogical exemption of private gun sales from background checks is the very reason that criminals don't currently have to obey existing background check laws. ... My research has shown that state universal background checks — along with other state laws designed to increase gun seller and purchaser accountability — significantly reduce the number of guns diverted to the illegal market, where the above high risk groups often get their guns.

Gun rights advocates still might try to use the argument that Obama can't infringe on Second Amendment rights because he's the president, but there's not clear evidence whether a law that requires gun sellers to do their due diligence would actually infringe on that right. For now, it looks as though Obama's executive action would be in the clear, though legal challenges will certainly come regardless.