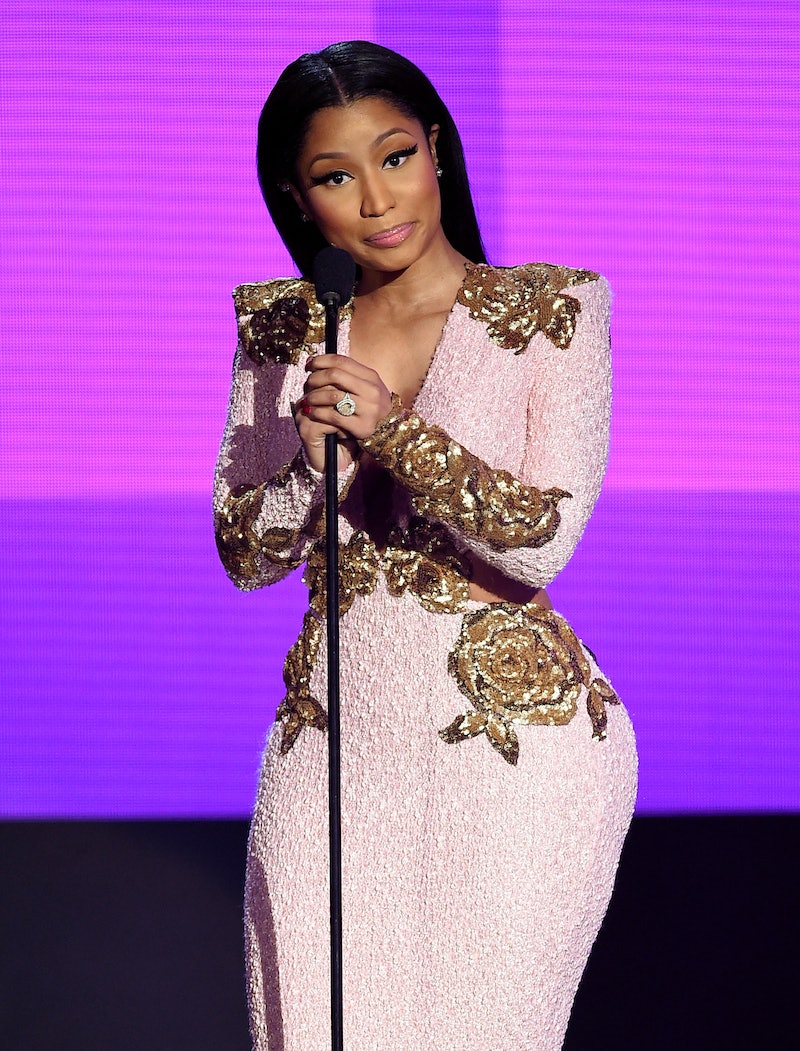 Nicki Minaj has the kind of bling that inspires my friends to tag me in Instagram photos of her diamonds and comment, "#THIS." There is no question that Queen Nicki has been known to rock some serious jewels: particularly a certain heart-shaped diamond on a certain finger back in April that certainly looked like engagement ring from her boyfriend and fellow rapper Meek Mill. Those Nicki Minaj/Meek Mill engagement rumors only heated up even more this week, thanks to the "Anaconda" rapper's Instagram photos of yet another jaw-dropping diamond ring on her left hand. But is Nicki Minaj actually engaged?

Turns out, the rapper just clued in fans on an easy way to tell if she's about to tie the knot. Speaking to Billboard in an interview conducted before she was gifted her most recent non-engagement ring, Minaj explained that Meek Mill intends to give her three rings before they walk down the aisle. THREE RINGS.

"He and I are not engaged. But he said he would like to give me three rings before we get married," Minaj told Billboard. "My birthday’s coming up, and he better get the new one, because he got [the first one] for my last birthday. So let’s see what happens."

Meek Mill obviously delivered, because on Dec. 9 — the day after Minaj's birthday — she immediately took to Instagram to share two jaw-dropping photos of that second ring:

Basically, the easiest way to tell if Nicki Minaj is engaged is to use the same method of calculating a tree's age: Count the rings. Since the rapper is just now on her second ring, it doesn't take a rocket scientist to determine that she's still got one more to go.

Still, Minaj expressed to Billboard that things aren't set in stone (no pun intended) with their relationship — but they're loving where it is right now. She candidly told the magazine:

I don’t know what’s going to happen with he and I. I just know right now we are really, really enjoying each other’s company. So, shout out to everybody in the world that’s just trying to find love or be happy. Everybody should have someone to hold at night. It really, really changes your energy. I find that my energy is very different afterward — if I’m in the bed with him, just hugging him all day. It’s just, like, something about love. You transfer it. It’s infectious.

If only those diamonds were just as infectious, so her fans could catch 'em too!