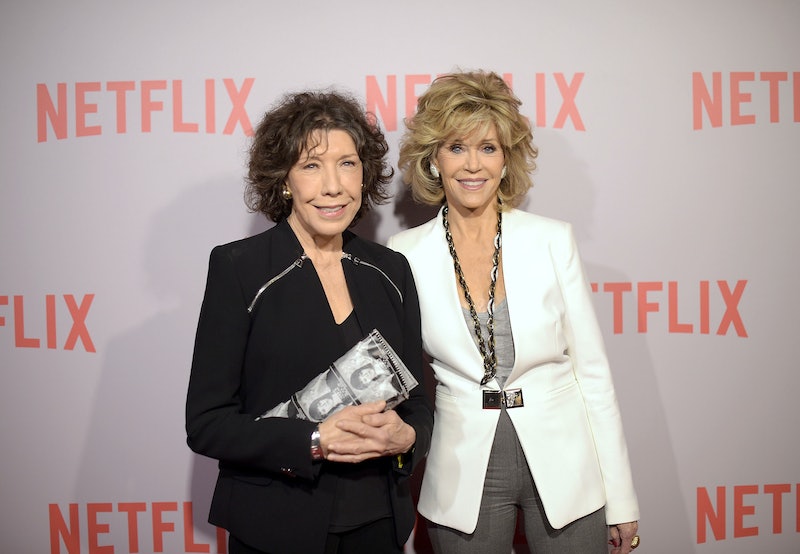 Are you eagerly anticipating the return of Netflix series Grace and Frankie? If so, you're in for good news regarding the series: According to Entertainment Weekly, Netflix has renewed Grace and Frankie for a Season 3 ahead of the its 2016 Season 2 premiere. That's great news, as it proves once again that streaming service Netflix gives their shows far more time to grow than traditional axe-happy networks — viewers rarely need to worry about Netflix canceling a series that has a solid, vocal fan base. In fact, creator Marta Kaufman told Variety that a tweet by Miley Cyrus was partly to thank for the Season 2 renewal. Of course, we can't give all the credit to Cyrus: Grace and Frankie has an important place in our media landscape as one of the few shows that give older women the voice that they deserve.

For those of you who haven't streamed Grace and Frankie yet, the series is about frenemies Grace (Jane Fonda) and Frankie (Lily Tomlin) who must learn to live with one another after their husbands divorce them so that they can be together. Though the women are vastly different, they share more in common than they originally assumed. Both have lived comfortable lives as someone's wife — but now, in their 60s, they must start to develop their own individual identities separate from their husband. Their next moves give way to bittersweet, heartbreaking, and often very, very funny results.

It's not necessarily that older women don't make appearances on television: it's more common that, when they do, they are relegated to side roles as mothers, wives, or grandmothers of the central characters. Here, Grace and Frankie are the ones with the stories, and it's the younger generation that acts as their minor characters. Grace and Frankie should be applauded for shaking up the status quo, but it's disappointing that the show needs to.

Hopefully the renewal of Grace and Frankie will remind networks, writers, and even audiences that compelling stories can be written about older women. They have certainly earned the right for them to be told.