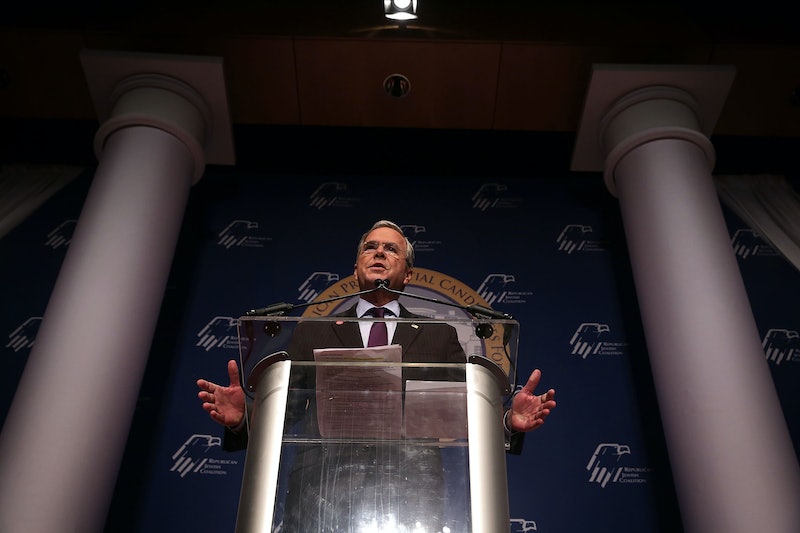 A strange image appeared on Jeb Bush's official Twitter account Thursday. It depicts Bush, a troubled look on his face, standing in a sea of people and surrounded by crowd-surfers. "That was a great show," the accompanying text reads. "Thanks @reddit." The post was destined to baffle 90 percent of those who saw it, but the explanation was in fact quite simple. A photo had surfaced of Bush making a silly face at a campaign event, and the good folks at Reddit decided to Photoshop the fledgling GOP candidate into various absurd settings. Reddit's Jeb Bush Photoshop battle was so successful that apparently, even Jeb! himself was impressed enough to repost one of the entries.

Using image-editing software to satirize an odd or notable image is a favorite pastime of many Internet denizens. I say this as somebody who, in my earlier years, used to regularly partake in these Photoshop contests on various online forums. Sometimes, an earnest Internet user asks for help cleaning up an image and gets a flood of joke responses instead; other times, Photoshop battles emerge when a news organization releases an especially strange promo image for an upcoming interview. Whatever the catalyst, Photoshop battles are a unique sub-genre of Internet humor, and often produce hilarious results.

But this isn't the first time Jeb! Bush has been mocked by Photoshop-savvy Internet users. Let's take a trip down Jeb Bush meme-ory lane.

Jeb Can Fix It

When Jeb attempted to revive his struggling campaign with the slogan "Jeb Can Fix It," the Internet quickly got to work.

Later, when an image surfaced of Jeb pointing in front of a green screen, Photoshoppers recognized the opportunity and wasted no time.

As with other low-energy presidential candidates, Jeb attempted to inject some excitement into his candidacy by putting an exclamation point after his name on campaign materials. That, too, was a Photoshop battle waiting to happen.