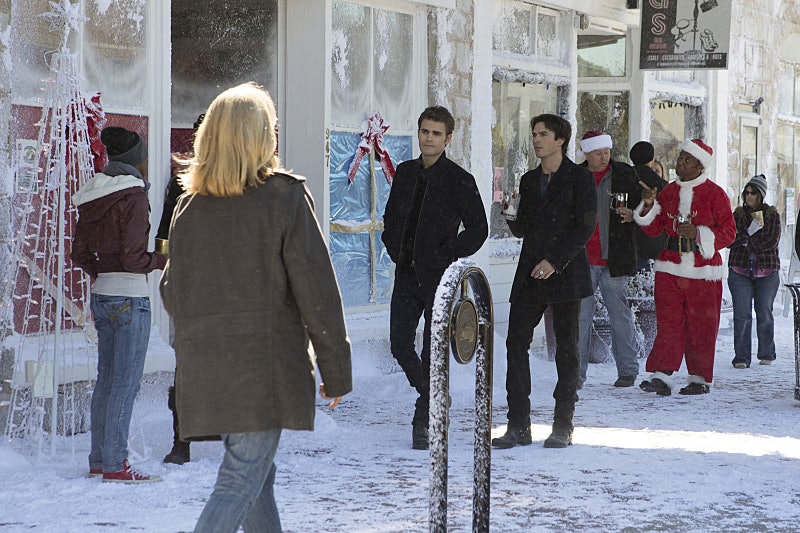 Well, I have to say that I really didn't see this one coming. After weeks and weeks of learning about this mysterious Phoenix Stone (a long distance cousin to Season 2's moonstone), The Vampire Diaries midseason finale finally gave this storyline a real purpose, though it came at a very heavy price. I guess I should just come right out and say it then. Damon and Stefan are trapped inside the Phoenix Stone, so get ready to see their worst nightmares come to life right before our eyes. You see, apparently this mystical stone does a lot more than just trap its vampire prisoners. It also punishes the vampires for every sin they've ever committed throughout their lives, thereby making them suffer in their own personal hell of torment.

Julian knows firsthand the power that this stone can wield, which is precisely why he drove the Phoenix Stone sword into Damon's heart — which, in turn, transferred his spirit into the stone — so that he could suffer as he had suffered for over 100 years. That in and of itself was pretty devastating since we all know that Damon has committed more than his fair share of sins in the past. So this is going to be an unbearable situation for him. (Though I'm certainly excited to see Damon back in his Civil War garb.)

However, now the situation has been made even more dire now that Stefan is trapped within the confines of the stone as well. (This time by Nora's hand, and just when I was beginning to like her.) So now both Salvatore brothers are about to face some very dark demons, making them both incapable of saving each other. Normally, when something bad happens to these two, it's usually a one-at-a-time type of deal. That way the other brother can vamp up and save the other because the brotherly love struggle is very, very real.

But now that they're separated and in trouble, I'm very worried about where this could all lead. Like Julian and Valerie have both stated — the stone changes you when you're in there. And while the January promo indicates that Damon will only be in there for a mere three months, it may still have a powerful effect on him. Based on the flash forwards we know they both manage to get out of the stone, but that doesn't make me any less intrigued to discover the horrors they'll face while inside. Is it January yet?