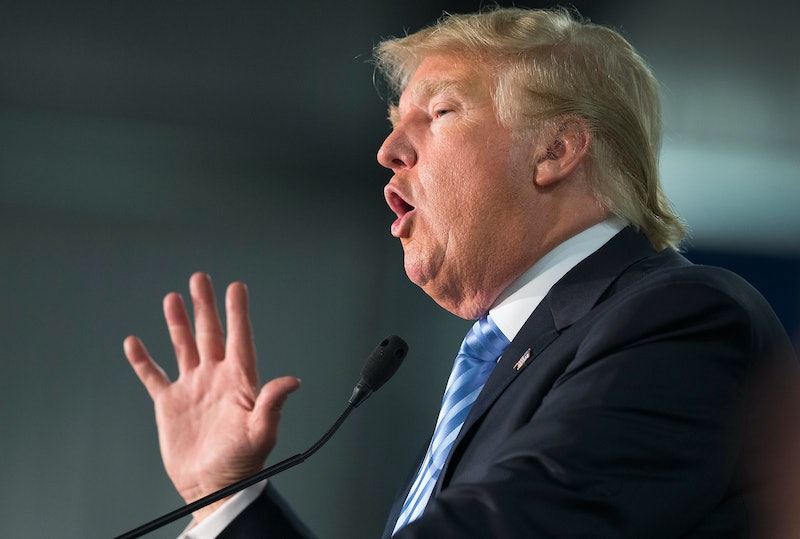 The next Republican debate is rapidly approaching, and a lot has changed since the last one. Most notably, Donald Trump's bigoted anti-Muslim rhetoric has reached a fever pitch, culminating in his reprehensible proposal to ban all Muslims from entering the United States. Early evidence suggests that this alone won't sink his primary campaign, as 42 percent of Republicans approve of this plan, according to a poll by NBC and The Wall Street Journal. But it will almost certainly get a mention at the upcoming GOP forum, and in that sense, the next debate could be make or break for Trump.

First, let's disregard the possibility that Trump might say something at the debate that erodes his support from Republican primary voters. It's beyond obvious at this point that Trump's fans cannot, and will not, be turned off by anything he says or does. They're in his camp to stay, and until Trump strips naked on stage and proclaims his allegiance to ISIS, nothing will change that.

But despite Trump's dominance in the polls, the fact remains that 70 percent of Republicans support somebody other than him. Trump can only be defeated once that 70 percent, or a large portion of it, rallies behind a single alternative candidate. This hasn't happened yet; there are too many other Republican candidates still in the race, and none of them have truly broken out as an anti-Trump alternative.

This is where the next debate comes into play. It's a golden opportunity for another candidate to either consolidate their support or, alternatively, collapse entirely and make room for somebody else to rise. If that were to happen, Republicans would be one step closer to unifying behind an anti-Trump candidate, and that is the biggest — and perhaps the only — threat to Trump's candidacy.

Who might that candidate be? Well, other than Trump, the three Republicans with the highest poll numbers are Ben Carson, Ted Cruz and Marco Rubio, all of whom pull around 15 percent support. The rest of the candidates are all below 4 percent in the polls and, barring something highly unexpected, will remain non-entities in the race until they inevitably drop out.

The action in the next debate, then, will rest largely on Carson, Cruz, and Rubio's shoulders. If any of them manage to significantly damage one another on stage, that would, oddly enough, go a long way to damaging Trump as well. It's hard to predict which one has the biggest chance of breaking out, but it most likely won't be Carson, who's been bleeding support for the last month and hasn't exactly been a force to be reckoned with on the debate stage.

That leaves Cruz and Rubio. A nascent rivalry between the two is already brewing, and while the two avoided taking any direct shots at one another during the last debate, that truce can't last forever. Things are going to get dirty between the two very soon, and the next debate could be the first time the two freshmen senators start slinging mud.

It's anyone's guess who will ultimately triumph in the Cruz-Rubio feud, because they're both very competent debaters. But whoever prevails is well-positioned to pick up the others' supporters, as the two candidates are very similar from a policy standpoint. Carson's supporters, too, will need to find another candidate if and when he withdraws; it's unlikely that they'll go to Trump, given the vast differences in temperament between the two.

Trump benefits for as long as Cruz, Rubio, and Carson continue to poll neck-and-neck; things get more difficult for him as soon as one begins to dominate over the others. It's not unheard of for a candidate's candidacy to crumble completely after a poor debate performance; see Rick Perry in 2012 or Jeb Bush this year for proof. If any of the candidates collapse at the upcoming GOP debate, Trump is in trouble — regardless of what Trump himself does.