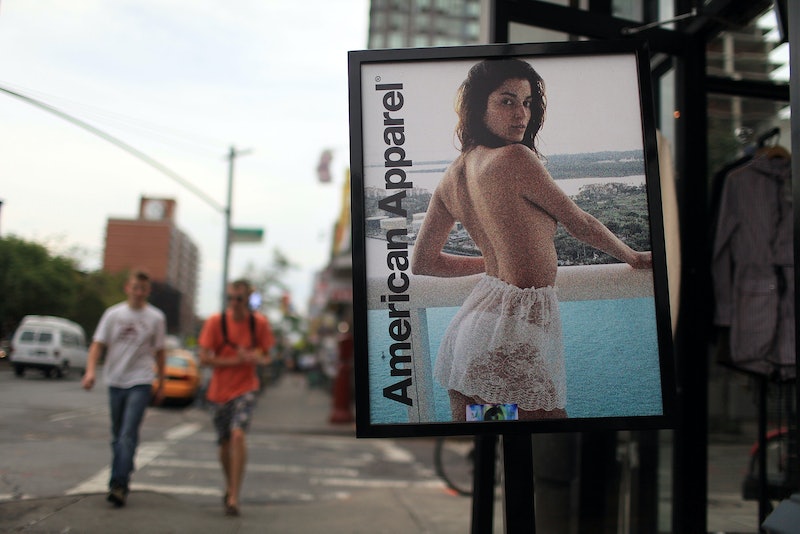 On Thursday morning pedestrians strolling on East Houston Street in New York City were treated to the sight of American Apparel window mannequins in sheer lingerie sporting a full bush of pubic hair. Is this art? Is it fashion? None of the above. It's a marketing tactic by American Apparel to bring in the Valentine’s Day shopper.

The Observer reports that the display was meant to re-imagine the meaning of the holiday. American Apparel District Visual Manager Dee Myles told the paper:

[the display] brings rawness and newness to a holiday thought of as a romantic Hallmark holiday … by exploiting the lust of Valentine’s Day.

An american Apparel rep told ELLE.com that the store display is a celebration of natural beauty:

American Apparel is a company that celebrates natural beauty, and the Lower East Side Valentine's Day window continues that celebration. We created it to invite passerbys to explore the idea of what is 'sexy' and consider their comfort with the natural female form.

Women should not be ashamed of the body and (ahhhem) hair we are given. And, yes, a real conversation needs to be had about what is sexy, beautiful, and feminine. But this smells less like a grand statement about feminism in modern society and more like a publicity stunt, especially when the messenger is notorious for their checkered past.

Between the Period Power t-shirt, the ridiculous Halloween costumes, sexual harassment allegations against Charney, questionable hiring policies, and previous ad controversies (nope, this isn't the first time they have used pubic hair to gain attention), American Apparel is not in the best position to wax philosophic on female body image acceptance.