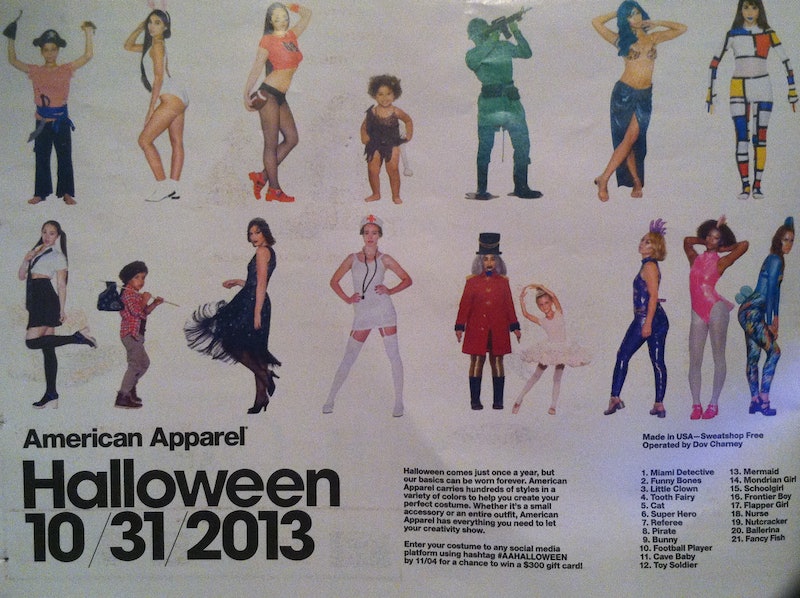 I was flipping through my trusty Chicago Reader today, as we do in the Chi, when my eyes were assaulted with a significant percentage of bare thighs per square inch of page, courtesy of ye aulde American Apparel. This wasn't your average naked girl in American Apparel socks-type advertisement; this was the Halloween version. The models were clad in costumes — or "clad" in "costumes," I should say — that were comprised mostly of leotards and other AA basics that had been conveniently repurposed to look vaguely Halloween-ish.

To be honest, I've always been kind of an AA hater. It's because I know too much, okay? I've read the accusations against Dov Charney, their skeezy CEO who's pretty much the Terry Richardson of retail; I know a guy who was creepily nudged out of his managerial job there because he didn't fit with AA beauty standards. And while I completely applaud the company's no-sweatshop, made-in-the-USA policy, I find their aesthetic annoyingly faux-thrifted (I'd rather buy ugly sweaters at Goodwill for $5, but thanks).

Let's take a closer look at these Halloween costumes, which manage to be horrifying and hilarious at the same time. The worst one is probably the "football player." Just to make sure we're all on the same page, this is what football players normally dress like:

And this is what you wear to play "football" at American Apparel HQ:

To reiterate, that's an outfit comprised entirely of sheer tights, black underwear, a cropped top that has the number 69 on it, and no bra underneath — because who needs support when you're racing toward the end zone, right?

I spent a few agonized minutes trying to figure out what these girls were supposed to be — fairies? Ballerinas? '80s nightmares?

It wasn't until I examined the fine print that I truly understood:

FANCY FISH. They are supposed to be Fancy Fish. I CAN'T.

Speaking of things that are imaginary, here's how to dress as the Tooth Fairy. Remember her? That beautiful, innocent symbol of childhood? You'd snuggle into bed, still poking at the new gap in your mouth, and as you drifted into dreamland...

...this sexy little thing would float through your window to the sweet lullaby of boom chicka wah wah, clad in a tight corset top and garters. She'd toss a quarter in the general direction of your pillow, chug from her flask, and then head straight for the basement rec room, where the real party was happening.

By now, you're probably wondering, "What about the menfolk?" Don't worry, American Apparel provided for them, too:

Score! The lucky buggers get to dress up as Dov himself.