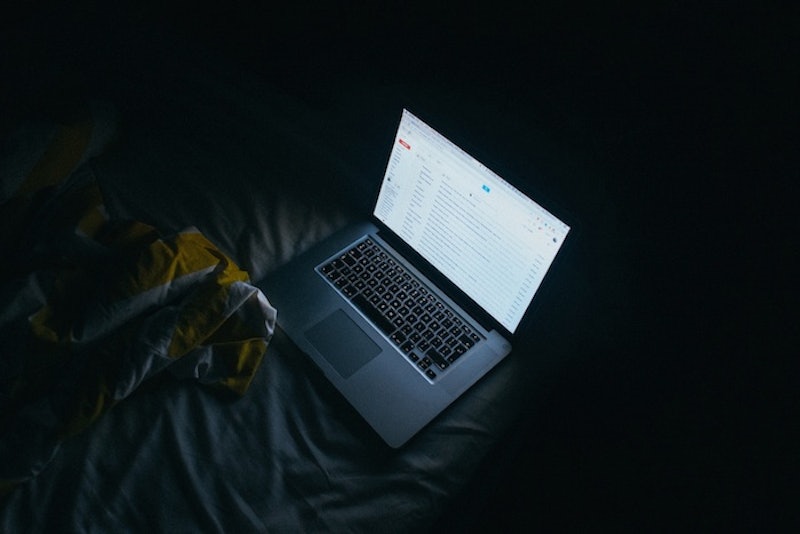 For many of us, our quality of life has only been improved by having access to the Internet: we can now shop at midnight, look at pictures of cats whenever we like, participate in Twitter hashtag political protests, you name it. But while the Internet has vastly improved our existences, it has also increased our ability to be utter d*cks to one another, often behind the wall of easy anonymity — by engaging in trolling or other forms of harassment.

And if you're the target of online harassment and abuse, you know that it can feel just as real as being shouted at on the street or sent a vile anonymous poison pen letter. But while the law is trying to catch up and punish online abuse in the same way it punishes real-world abuse, online abuse has already been established as a genuine problem with real emotional impact by mental health professionals.

Online harassment is also a feminist issue — because, unfortunately, up to 25 percent of all young women online have been sexually harassed or stalked, according to Fast Company. The Washington Post reported this year that many feminist writers who work online have been subjected to so much violent and upsetting abuse from anonymous sources that they have begun to silence themselves. The simple act of being a female online — let alone one that stands up for women's rights — can make you a target.

A lot of attention is currently being paid to efforts that spotlight the cruelty of specific online abusers — like a Brazilian campaign that posts racist Tweets on billboards near the houses of their perpetrators, which has received a lot of praise — but if you have been subject to online abuse, keeping yourself safe is probably your first priority, rather than exacting retribution. So if you've been on the receiving end of any online harassment — a term which covers everything from a death threat to a trolling tweet — here are five steps to take:

It's important to get one particular myth out of the way: contrary to what many people think, there are state laws against online harassment.

Depending on where you live, the categories and penalties may vary, but many states are working hard to make it seriously illegal to harass anybody online, whether through direct threats, anonymous communication on social media, or distributing sexual materials of you. You can find your own particular state's laws at Working To Halt Online Abuse, a volunteer-run organization dedicated to empowering victims of online harassment.

The important thing here is to do your research. Massachusetts, for example, has laws pertaining to actions that cause "emotional distress," while some other states only qualify an action as harassment if you've been threatened with physical harm. And, as The Atlantic pointed out in 2014, legal fights against cyber-harassment can get complicated, expensive and sometimes tangled in the minutiae of law: in New York, for instance, the harassing communication has to be directed at you, not family members or partners, in order to legally qualify as harassment.

Even if you don't believe that contacting the police with lead to your harasser being punished, even if you can't afford a long legal fight, even if you worry you won't be believed or prioritized: please report your harassment, with evidence. You shouldn't have to try to deal with this on your own.

2. Report Your Harasser To The Company That Runs The Site

It is up to you whether you feel like contacting your harasser and telling them to stop, blocking them without contacting them first, or taking any other actions — different people are made to feel safe and comfortable by different things, so don't feel pressure to confront your harasser if you don't want to. However, it is always a good idea to report your harasser to the company that runs the site or platform where you are being harassed.

This is one of those "covering all bases" actions. Facebook and Twitter have abuse protocols that allow users to report abusive language or behavior, as do many other social media sites. While reporting the abuse is not always guaranteed to make it stop, it's still important to do — it shows the site's management that abuse is a serious problem, and, in the event that you do take legal action, it shows that you wanted to do everything possible to make it stop.

If the problem is occurring over email, you may be able to include more detail in your report, depending on your particular email provider. Gmail's system for reporting abuse, for instance, lets you copy and paste entire emails and fill in "additional information" to give them context about the pattern behind any harassment. Report everything, be consistent, and give the authorities at the site where the abuse is occurring as much information as possible.

3. Keep All Your Records

You may feel the urge to delete every horrible thing that has been sent to you — a completely understandable impulse. But it's legally necessary for you to keep hold of it in some form or another.

Working To Halt Online Abuse recommends saving the harassing material with two forms of back-up: save it on the platform where it occurred, and take screenshots or photographs of the abuse so that the abuser can't cover their tracks by deleting things. If you can archive things away in a separate area so that they don't appear to you daily and upset you, that's the best option for your own peace of mind. And anything else, from your diaries to public posts, is valuable as evidence of your own reaction to the harassment.

The impact of cyber harassment is real. Even when abuse is coming from behind a screen, it is still abuse, and it can have very serious emotional implications for victims. So it's pretty crucial that you develop a support network among your own friends and family, and, if possible, get some professional support, as well.

Counseling for abuse victims is highly recommended by the Fight Cyberstalking Organisation, particularly if you can get hold of a specialist support group or counselor who deals with this specific issue. Don't just rely on friends and your mom: reach out for specific help.

Victims of online harassment have become some of the most powerful advocates for change in how online harassment is treated — both legally and within the communities where the harassment takes place. From Anita Sarkeesian, who received a deluge of vile threats (and still does) after she criticized female roles in video games, to Lindy West, a feminist writer who wrote an article about how a troll pretended to be her deceased father in order to taunt her, we've seen that sharing individual stories, and helping people understand the real cost of online harassment, can make the most impact.

You're under no obligation to share your story, of course, and you should prioritize your sense of healing and safety. The sad facts are that being open about abuse online often leads to more abuse (in the case of Sarkeesian and others). But if you feel up to it, telling your story may be your most powerful tool in the fight against harassment culture. So if you are so moved, stand up, tell your story, and let the world know that you won't stand for an online culture that targets women for harassment.