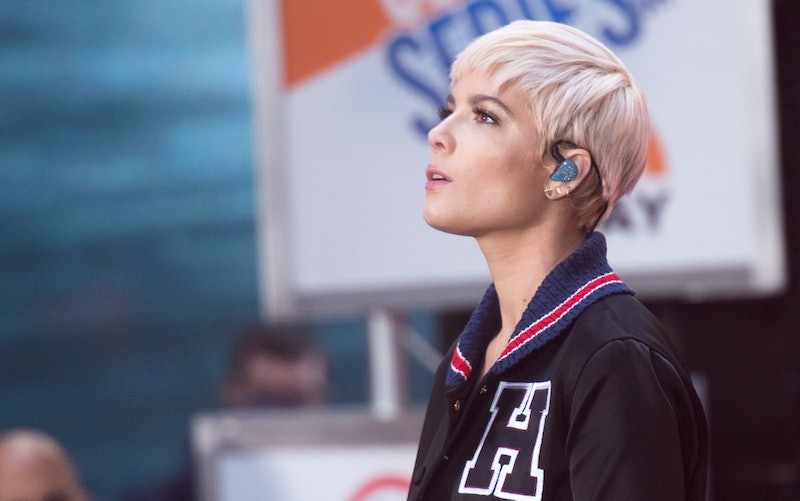 Singer Halsey has been buzzing for the past year, thanks to her atmospheric music and that unforgettable, crystalline voice. But Halsey's collaboration with Justin Bieber provided a major mainstream boost and rightfully so. She is edgy and amazingly talented. Also, Halsey just shaved her head, because she doesn't care about hair. She was all like "Bye, Felicia" to her adorable pixie.

It's also important to note that Halsey tweeted about how she doesn't quite get why the media has made such a fuss about her blue hair and then her super short hair. So she went and got rid of it.

Here is a girl who refuses to be identified by her hair, be it color or cut. That makes Halsey a renegade and rebel in the pop world, since so many singers change their looks up daily not only to satisfy their creative whims and urges, but in order to stay relevant and in the headlines.

Halsey, who was last seen with a black and then a white hot pixie with bangs, isn't about all that noise. She is firmly "No hair, don't care." Even though she was perplexed by the attention paid to her hair, she should accept that she has a cool, unique, and fun look. With hair or without.

Want to see Halsey with her shaved head?

She is close-cropped and as beautiful as ever. And wearing a Victoria's Secret PINK brand bra.

It must be so freeing to ditch all the maintenance that comes with having short and colored hair, even though she has access to all sorts of stylists.

Here she is before she went and shaved it all off.

And here she is, both short-haired and blue-haired. She wears both looks well and that's why we talk about it.

No, Kylie Jenner did not corner the market on blue hair this year. #SorryNotSorry!

Old Hollywood glam and gorge! Those finger waves are such a throwback and so screen siren-y.

I seriously have such a girl crush on Halsey. She holds her own with The Biebs and beyond and Halsey's music so belongs on your playlist of your preference music listening service!

Halsey is always about statement lips, too. She is always rocking bright or deep mattes. And those lashes? Those are doll lashes come to life.

No, it's not about her hair. But we and her fans adore her tomboy cute look and that's why we talk about it.

Take a peek at some other close-cropped beauties while you are at it.