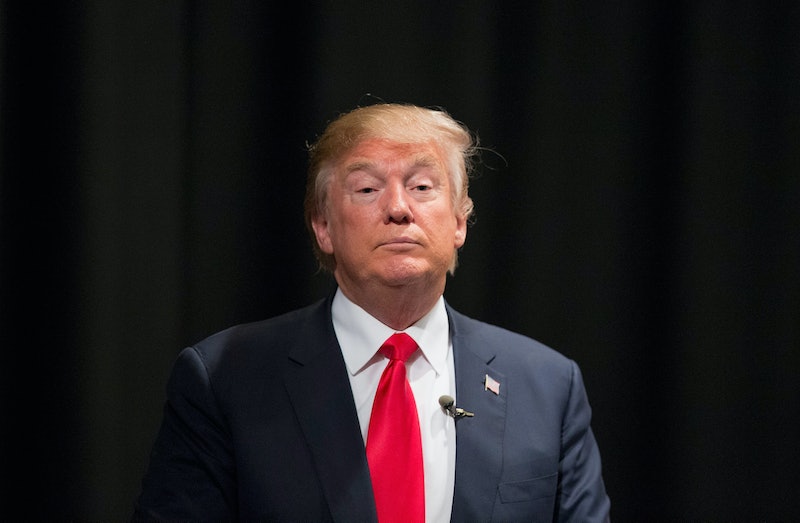 Despite his highly offensive and xenophobic speech in recent weeks, Donald Trump is still leading Republican presidential polls, with Ted Cruz trailing behind in second place. Left-leaning voters, Republican leadership, and even some right-leaning voters remain baffled by the fact that Trump has a seemingly strong following throughout the country. If you're confused about who exactly wants to see Trump as president of the United States, there's a handy new tool to show which of your Facebook friends like Trump. Without having to awkwardly ask your family, friends, and acquaintances whether they think Trump is completely nuts or should hold the highest office in the country, you can find out their true feelings in a matter of seconds — it's basically magic.

I should warn you that knowing this information could drastically change how you view people in your life. If you oppose Trump with every fiber of your being and discover that your best friend from high school actually likes him, you may start to question the entire friendship. With that being said though, this trick doesn't account for everyone who supports the candidate, as it only tracks those who liked Trump's official Facebook page. There's also the added confusion of those friends who liked his page as a joke or simply to keep up with the presidential race.

To check which of your Facebook friends have liked Trump's page, all you have to do is go to FriendsWhoLikeTrump.com. The URL redirects you to the Facebook search function and creates a list of your friends who liked his public figure account. I was relieved to find that my list only consisted of two friends — one of whom is a political reporter and likely follows Trump for work purposes; the other, I assume, liked him ironically, as they also liked Bernie Sanders' Facebook page.

Trump has been a divisive character since he announced his bid for president in June, but sparked even more controversy earlier this week when he said America should ban all Muslims from entering the country, regardless of where they're from. Trump said it's "probably not politically correct, but I don't care." The White House denounced this policy and claimed it disqualifies Trump from becoming president. Even other Republican candidates criticized the harsh immigration plan, with Cruz saying it wasn't his policy and Jeb Bush calling Trump "unhinged."

So, if you're curious to know if anyone you know supports Trump's bid for president, check out FriendsWhoLikeTrump.com immediately.