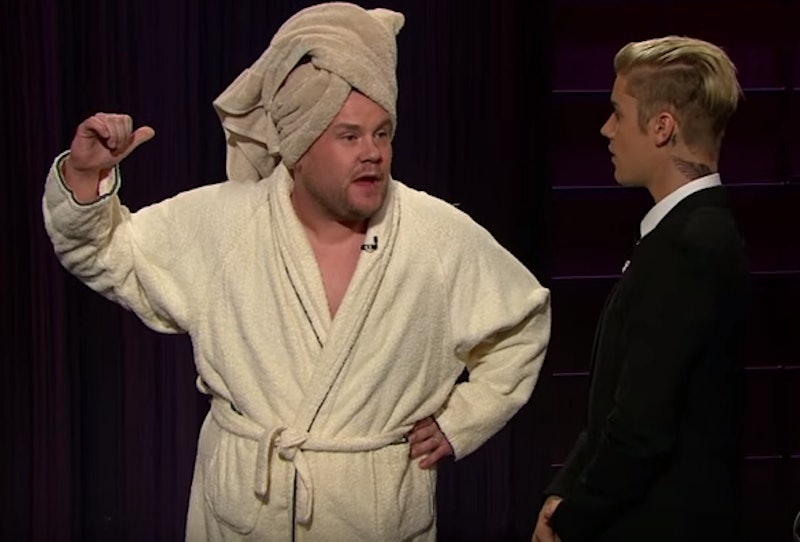 The Late Late Show with James Corden on YouTube
By Vannessa Jackson
Dec. 11, 2015

It seems like James Corden has found his late night muse in Justin Bieber — seriously. Like Jimmy Fallon and Justin Timberlake, these two are always doing some sort of hilarious bit together on the The Late Late Show. On Thursday night's episode, there was no shortage of hilarious antics to boast. Especially when Bieber took over the Late Late Show opening monologue, because, of course, Corden was too busy with his "pre-show bathing ritual" to be on time.

Regardless of the reason, Bieber did get a few noteworthy laughs while doing his takeover. There were tons of jokes made about his music, including a couple of references to his two latest hits, "What Do You Mean?" and "Sorry," which Corden called "pathetic." Obviously, Corden couldn't let Bieber go on with his monologue, so he kicked him out, which surprisingly was booed by the audience. Considering Bieber hasn't been on the right side of popular opinion in recent times, after a slew of public incidents and cancellations, the audience seemed all too pleased to have him stay and host the show on Thursday.

Hopefully Bieber appearing on The Late Late Show will become a regular staple, as Timberlake is to The Tonight Show With Jimmy Fallon, where the two are constantly doing funny bits together. Bieber and Corden have already done two carpool karaoke videos together, the second of which aired last month. Carpool karaoke is a bit on The Late Late Show where Corden drives different celebrities around the streets of Los Angeles while they sing along to music together. He has done this with Stevie Wonder, Carrie Underwood, and Jennifer Hudson to name a few. On their second carpool karaoke, Corden and Bieber are even attacked by paparazzi, but still find a way to turn the incident into a hilarious bit about Corden's level of fame.

It's good to see Bieber throwing some comedy in his life after the long year he has had. Hopefully this marks a return to the old fun loving Bieber that I grew to love... or at least provide some more hilarious videos. That's cool too.