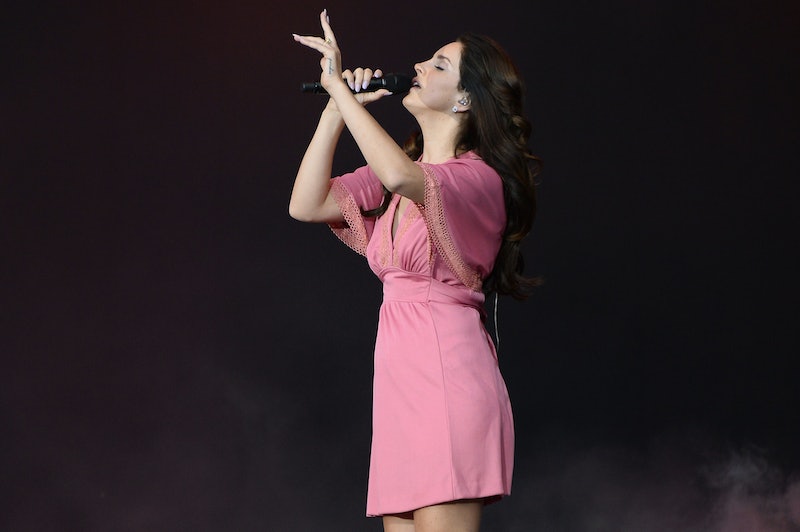 From Nancy Sinatra to Adele and back again, the James Bond films often open with a sizzling, sultry song. So it’s not wonder that your fav melancholy songstress Lana Del Rey wanted to do a song for the new James Bond movie. "I would’ve done it if I was asked but I wasn’t asked," she said in a recent NME interview about being passed up for Spectre. "I love all of the Bond music that’s been put out over the years and I love soundtracks in general. There are a couple of songs on this record that have a Bond feel like ‘24’ and ‘Swan Song’." Well, with James Bond 25 (srsly, they’re on 25) on the horizon, I can think of a few other Lana songs that could fit the bill.

Now, here’s the thing. If you’ve paid attention to any of the James Bond films that have sprung up in the last, oh, let’s say 40 some-odd years, you’ll note that they tend to have a song that correlates with the title of the plot. So in imagining what Lana track could be re-appropriated, we also have to imagine what kind of Bond movie would go along with it. Not that it doesn’t seem like an organic match already...

So I'm just gonna give Hollywood a light push and throw out some choice tracks for the next Bond film. For example...

This, first of all, is one of the few songs on this list that 300 percent sounds like it's already a James Bond movie. In fact, I just double-checked really quick just to make sure Lana didn't co-opt the title from one (she didn't, but there are plenty of YouTube videos that marries the song with Bond footage). Anyway, this one's basically about our boy's latest Bond Girl revealed to be the kingpin (queen pin?) in a major crime organization. This is gonna make Netflix and Chill night super awkward.

"Off To The Races"

Bond tries to break up an illegal underground gambling ring but while he's undercover at the Kentucky derby he falls for the cutest thoroughbred. Think James Bond meets Seabiscuit.

Bond finally trades in his tuxedo for a pair of Levis and realizes he's just as successful at nabbing babes in denim, albeit these girls are more of the hip hop-loving, James Dean-obsessed variety.

Bond is neglecting his newest Russian femme fatale gal pal to play Goldeneye on Nintendo 64 like it's 1997 up in here. God, this guy just does not know how to hold down a successful relationship, does he?

Bond has to overthrow the Vatican and he also has to fight Dracula. That's what the songs about, right? No?

Honestly, it's just an hour and 58 minutes of explosions. Michael Bay directs.

Bond's latest, strangest, probably claw-handed nemesis offers him a piece of the pie if he just stays out of this one, and Bond's like, "eh, I could really use a vacation." Because he travels all over for these missions but it's work, you know?

This one's about Bond's new hit column in GQ. It's sort of a guide to the modern male spy, how to get your suits tailored to perfection, how to take your martinis, and how to seduce women in every country. Chic.

James goes to get an STI test. Apparently seducing women in every country has caught up with him.

"High By The Beach"

James takes all of his swindled money and spends a crazy weekend at a beach house in Santa Monica.

James gives up on being a spy, moves to Greenpoint and starts doing open mic nights with his new bearded friend where they do acoustic covers of Velvet Underground songs.

I mean, that's just the tip of the iceberg. In all seriousness, I think Lana would be a perfect pick to do the next James Bond flick, so fingers crossed, girl.