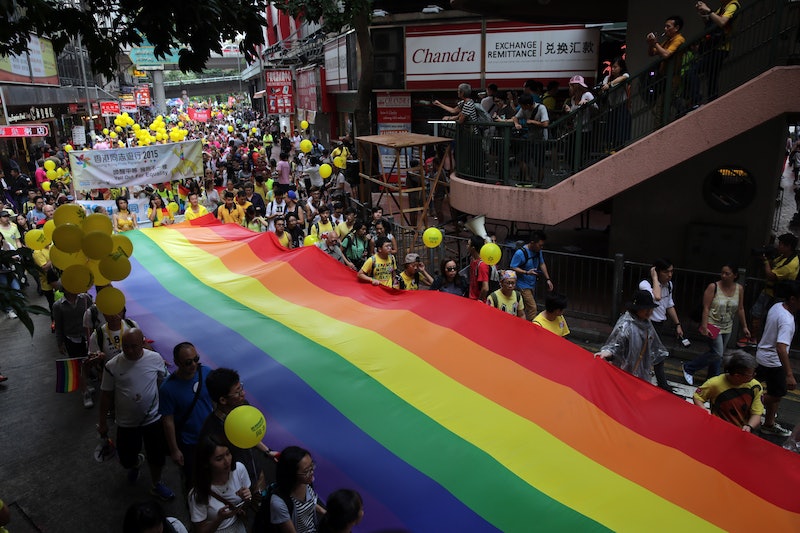 Progress often moves slowly, but it does continue marching on. Case in point: Cincinnati just banned LGBT conversion therapy, making them the first U.S. city to do so. And even though it's outrageous that this practice is still legal in so much of the United States, it's nice to see more and more state and local governments banning it.

LGBT conversion therapy, which is also called "reparative" therapy or "sexual reorientation" therapy, is the practice of trying to change a person's sexual orientation, eliminating same-sex attraction and making everyone straight. Common sense says this is a terrible idea, of course, but science does, too. For one thing, being gay or bisexual is not classified as a disorder by any reputable scientific body — in fact the American Psychological Association's official policy is that "same-sex sexual and romantic attractions, feelings, and behaviors are normal and positive variations of human sexuality" — so trying to "cure" this "condition" already makes no sense . For another, it doesn't work.

Conversion therapy doesn't just do nothing, though. It is actively harmful, particularly young people. As the American Academy of Pediatrics reports:

The potential risks of reparative therapy are great, including depression, anxiety and self-destructive behavior, since therapist alignment with societal prejudices against homosexuality may reinforce self-hatred already experienced by the patient. Many patients who have undergone reparative therapy relate that they were inaccurately told that homosexuals are lonely, unhappy individuals who never achieve acceptance or satisfaction. The possibility that the person might achieve happiness and satisfying interpersonal relationships as a gay man or lesbian is not presented, nor are alternative approaches to dealing with the effects of societal stigmatization discussed.

Dozens of national organizations in the medical and psychiatric community have come out against the practice of conversion therapy, but so far, relatively few places have banned it. In fact, despite having no research backing its effectiveness and despite the fact that the White House has called for an end to conversion therapy, the practice is still legal in 77 percent of the United States.

However, that is slowly beginning to change. Here are the six places in the United States where conversion therapy is illegal.

Under a new city ordinance, it is now illegal for any medical professional to provide "treatment to change the sexual orientation or gender identity/expression of a minor in the city of Cincinnati." The penalty for violating the ban is a fine of $200 per day.

This summer, a New Jersey court ruled that LGBT conversion therapies violate the state's laws consumer protection laws against fraud. As such, the practice is no longer permitted in the state.

Oregon banned conversion therapy in May of 2015, roughly one year after the state began recognizing same-sex marriages.

The District of Columbia's City Council banned gay conversion therapy in December of 2014. Unfortunately, the other legislative bodies that operate out of the capital haven't felt compelled to pass a national law on the subject yet.

But here's hoping they soon will. Because as awesome as it is to see more places banning the practice, going city by city or even state by state is going to take a long, long while.