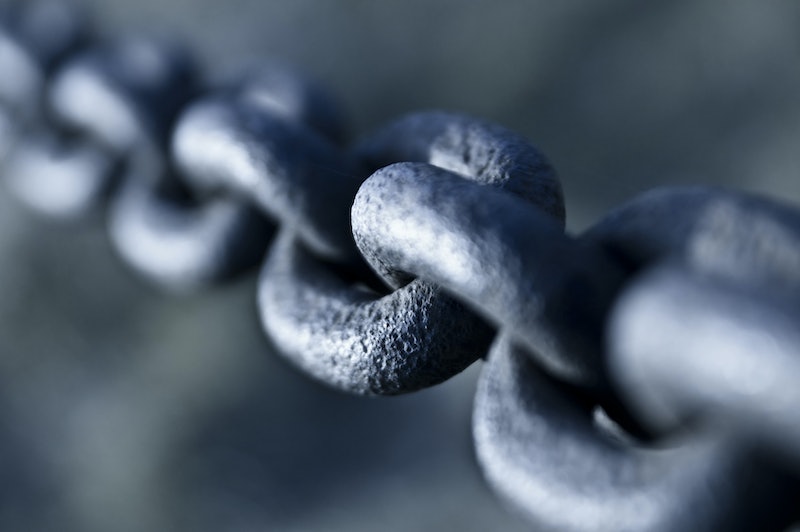 Our country's prisons are often unsafe and difficult to live in for all prisoners, but life behind bars can be particularly unbearable for pregnant people, as the video "It's Time For New York To End Shackling: Women Share Their Stories" demonstrates. In the video, produced by The Correctional Association of New York, six women give their accounts of being shackled during pregnancy. After hearing them, it's easy to see why this practice needs to be abandoned.

Since 2009, it has been illegal to shackle women during childbirth, Women in Prison Project Director Tamar Kraft-Stolar and Associate Director Jaya Vasandani say in an introduction, but it's still legal during pregnancy, another time when it can cause discomfort and pose health risks. "Women are routinely shackled throughout their pregnancies," Kraft-Stolar says. In June, the New York legislature passed A.6430-A/S.983-A, a bill that bans shackling during pregnancy and eight weeks postpartum. Now, it will become law if the governor signs it.

To give a better idea of the consequences of shackling during pregnancy, The Correctional Association of New York interviewed women who were subjected to the procedure. Here are some of the women's stories; scroll down to watch the full video.

Miyoshi claims she had to wear shackles that were too tight around her waist. "How would I have room to breathe?" she worried. She also says she was constantly falling due to the shackles around her ankles. During her daughter's first visit to the doctor, she says she was still shackled and handcuffed, causing her to trip and drop her daughter. "I know I made a mistake, but this is a totally different punishment that nobody deserves," she says.

Maria's hands were shackled in front of her during her first prenatal doctor's appointment, she says, which did not feel comfortable or safe. "God forbid you trip," she points out. "Guess what? You can't even stop yourself. You're gonna break your wrists, and you're gonna harm your baby."

One day when Tina was five months pregnant, it was hailing and she slipped. "You can't catch your balance when you're handcuffed and you have ankle restraints," she says, seconding Maria's story. She claims the shackles and handcuffs also meant she couldn't help her son when his bottle was falling out of his mouth. Yet, like Miyoshi, she says she was held responsible for carrying him.

Bridgette had a miscarriage while incarcerated. "I was shackled from the beginning all the way to the delivery," she claims. "It was the most dehumanizing, embarrassing, degrading, animalistic thing that I have ever experienced." She says she spent several days in the hospital during which she was either shackled or handcuffed. "I had to grieve the best way I could under the circumstances and then be OK with it," she says.

More like this
23 Abortion Funds In States With Trigger Bans To Donate To
By Emma Carey
How To Fight For Reproductive Rights, Based On How Much Time You Have
By Courtney Young
Yomi Adegoke On The Offline Diaries & The Power Of Representation
By Jessica Morgan
The Music Industry Continues To Fail Black Women
By Precious Adesina
Get Even More From Bustle — Sign Up For The Newsletter