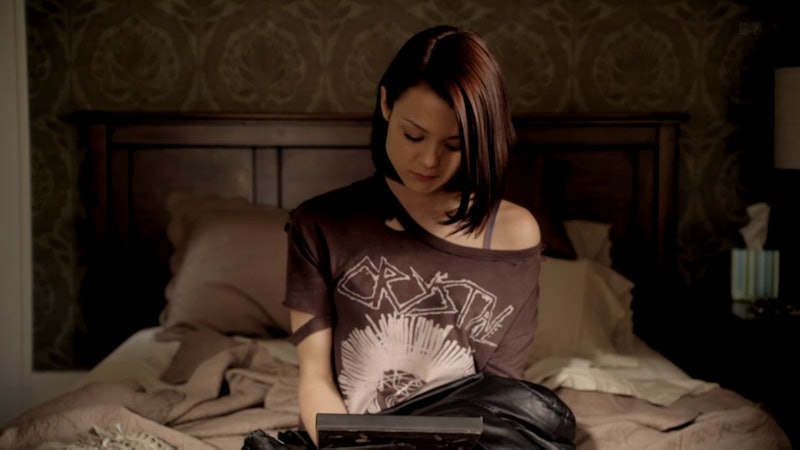 If there's one show on TV right now that will make you so glad you're not a teenager at a TV high school, it's Finding Carter. Between crazy kidnappers moving in next door and boyfriends who are secretly married drug dealers, you would not want to live in Carter's world. Of course, that doesn't mean that you don't love watching all of the drama unfold. If the drama isn't cranked up to an 11, it's just not the same Finding Carter we know and love. And if the show's sophomore season taught us anything, it's that the drama can't stop, and won't stop coming — not so great for the characters, but definitely great for us fans. So will Finding Carter be renewed for Season 3 and let us watch even more juicy twists? Update: According to The Hollywood Reporter, Finding Carter will not return for a third season.

Unfortunately for Finding Carter fanatics, that's all up in the air. MTV has not yet announced a third season of the series, as we head into the Season 2 finale. The only clue that we have right now is to look at the ratings and see how they stack up compared to last season's numbers, when the series was ultimately renewed. Is Finding Carter still pulling in the same audience?

While traditional ratings don't mean everything — especially in the world of online streaming — they are still a marker that many networks use to see whether they want to continue to invest in a show. Unfortunately, Season 1 of Finding Carter pulled in far better numbers than Season 2. According to TV By The Numbers, Finding Carter 's very first episode pulled in 1.69 million viewers, and the season ended with a cool 1 million. In fact, the lowest rated episode of Season 1 had a decent 890,000 viewers watching.

The new season of Finding Carter isn't doing as well in the ratings. The season premiere garnered roughly 1 million viewers, but after that, the numbers decreased dramatically, never even reaching the numbers of the lowest rated episode from Season 1. The most recent episode, "The Corrections," pulled in 360,000 viewers. If the audience keeps decreasing, it may give MTV a reason to cancel Finding Carter.

But let's not lose all hope just yet. Ratings don't mean everything, and there is a chance that the series is pulling in bigger numbers from On Demand and streaming services — including MTV's own website — than the ratings suggest. Here's hoping that MTV gives us more Finding Carter, because I don't want to get off this drama-coaster just yet.