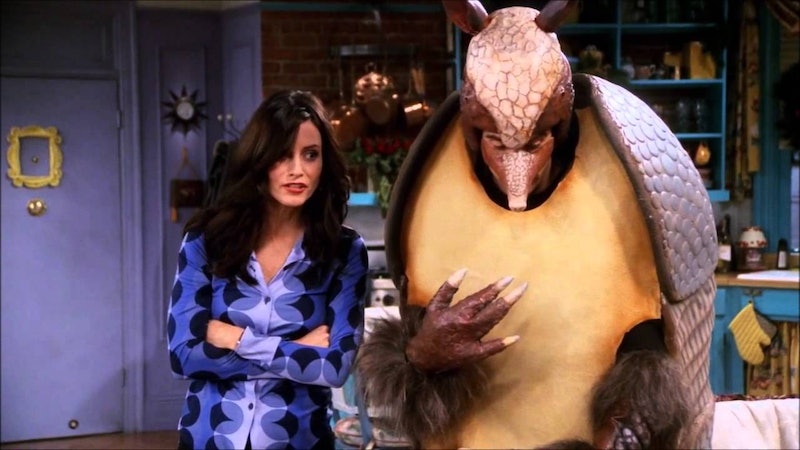 It's always comforting to spend the holidays with friends and loved ones. That's why there's nothing that screams Christmastime to me quite like marathoning a few holiday episodes of Friends . Whether you consider yourself a Monica (someone who runs the holiday season like she's the captain of a military ship) or a Chandler (someone who is really "meh" about the whole thing but definitely enjoys the side dishes), the holidays are a time to hang out with your closest buds, eat a ton of food, and if you're Ross, dress up like the Holiday Armadillo. (But seriously, only if you're Ross.) All of the Friends have their own holiday traditions, but what makes them so special is that they all involve coming together to have fun. But it's been a long time since we last saw the group spend the holidays together, which makes me wonder how they would celebrate the season in 2015.

The times have changed since Friends ended in 2004, and I wouldn't be surprised if that affected how Monica, Chandler, Ross, Rachel, Phoebe, and Joey enjoy their wintertime rituals. Here's what the beloved characters of Friends would likely be doing this holiday season.

1. Ross Would Be Working On His Children's Book, The Adventures Of The Holiday Armadillo

Ross was so stoked to get his paper in the library (even if it was in the section where students were more likely to hook up than actually read), he would have loved the idea of turning his original Hanukkah character into a beloved children's book. Sure, he may have to self-publish it, but at least it'll be available as an e-book.

2. Ben Would Be Starting His Own Chrismukkah

After years of having to decide between celebrating Hanukkah and Christmas, Ben would probably pull a Seth Cohen and create his very own holiday to celebrate. Unfortunately, holiday pranks are involved.

3. Rachel Would Be Taking Full Advantage Of Online Shopping

Rachel has a tendency to return pretty much every gift given to her, but she wouldn't if she already picked out each one from the Barney's website. In fact, her friends would be better off just giving Rachel their credit cards so she can order presents herself.

4. Gunther Would Be Working At Central Perk...

I mean, have we literally ever seen him outside of Central Perk?

5. ...But Also Be Designing Latte Art For Rachel

Just on the off chance she stops by for a peppermint mocha on Christmas Eve, sees her face made of foam in the cup, and falls madly in love with him.

6. Phoebe Would Launch A Kickstarter To Save Old Christmas Trees

Because every tree needs to fulfill his Christmas duty!

7. Monica Would DIY Every Holiday Item Pinterest Has To Offer

Be prepared for lots of gifts in mason jars, intricately decorated cookies, and wreaths made out of newspaper. Thrifty and crafty — perfect for Monica.

8. Mike Would Be Playing A Holiday Show

During which Monica would inevitably want to get on stage.

9. Chandler Would Send Everyone E-Cards

You just know that everyone is getting a goofy Elf Yourself card from Chandler this Christmas.

10. The Gellers Would Be Vacationing In Florida

Despite living less than an hour away from both of their children, the Geller parents prefer to keep to themselves most of the time. I bet that by now, they've made Christmas on the beach in Florida an annual tradition.

11. Joey Would Be Watching The Victoria's Secret Fashion Show

It airs in December, which technically makes watching it a holiday tradition. One that may be even more important to Joey than food.

Of course, we all know that no matter what exactly they're doing, the Friends would still be celebrating the holidays together — that's one thing that will never change.