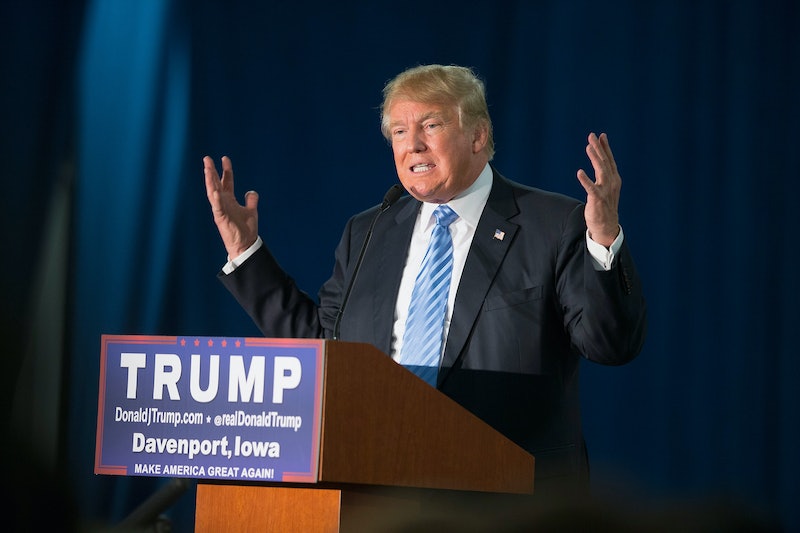 The backlash against Donald Trump’s hideous anti-Muslim rhetoric is continuing unabated. This time, the offended party is hacktivist collective Anonymous, which hacked Trump’s website on Friday and replaced it, oddly, with a tribute to Jon Stewart. Anonymous had announced the anti-Trump operation earlier in the week in a video, and Telecomix Canada, a group that describes itself as “an Anonymous collective,” claimed credit for Friday’s attack. This isn’t surprising — Anonymous has launched many socially conscious operations over the last couple of years, and this latest hack certainly falls into that category.

“Donald Trump, it has come to our attention that you want to ban all Muslims to [sic] enter the United States,” a distorted, choppy voice said in the video. “This policy is going to have a huge impact. This is what ISIS wants. The more Muslims feel [unintelligible], the more ISIS feel that they can recruit them. The more United States appears to be targeting Muslims, not just radical Muslims, you can be sure that ISIS will [unintelligible] their social media campaign. Donald Trump, think twice before you speak anything. You have been warned, Mr. Donald Trump.”

Despite the rough audio, the group’s argument is clear; Trump’s call to ban all Muslims from entering the United States is helping ISIS.

This isn’t the first time Anonymous has launched an operation targeting bigotry and injustice. Here are a couple more:

In 2013, the Nigerian Congress passed a bill that banned gay marriage, pro-gay organizations, and “public show of same-sex amorous relationships.” Not long thereafter, the Nigerian government’s website was taken down by an Irish hacker and replaced with a condemnation of the laws and the Anonymous logo.

More recently, members of the group released a warning video to the Nigerian government, condemning it for misappropriation of state funds.

Anonymous launched several operations during the 2011 Arab Spring protests aimed at boosting the pro-freedom demonstrators and condemning oppressive regimes in the region. When Tunisia was in upheaval, the group took down several official government websites in the country to protest the government’s Internet censorship, and later attempted a similar operation in Algeria.

Its most successful Arab Spring operation, though, was in Egypt. Responding to requests for help from local activists, Anonymous worked with Telecomix — which didn’t yet identify as an Anonymous affiliate — to restore access to websites that had been taken down by the Egyptian government and communicate up-to-date information to the protesters via fax when necessary.

In 2011, Anonymous targeted another oppressive government: Malaysia. The Malaysian government had blocked domestic access to certain websites, most notably WikiLeaks, and Anonymous responded by attacking no less than 51 government or government-linked websites in one day. Authorities believe the initiative was carried out from within Malaysia.

A group called Food Not Bombs handed out free food to homeless people in Orlando, Florida, in 2011. Incredibly, they were arrested by local police for violating a city ordinance governing food distribution near the capitol building. Anonymous responded by taking down the website of both Orlando Mayor Buddy Dyer and the city’s Chamber of Commerce, and called for a boycott of the city. In addition, a Guy Fawkes mask — the unofficial symbol of the hacking collective — was left hanging from a street sign near Dyer’s house.

Protests targeted BART, the transit system serving the greater Bay Area, after the agency’s police force shot and killed several unarmed men in BART stations. BART responded by shutting off cell phone service during the protests; Anonymous responded to this by hacking into BART’s website and releasing the personal information of over 100 BART police officers.

However, Anonymous also released information about BART commuters themselves, a move that was criticized as hurting the very people the protest was launched to help.