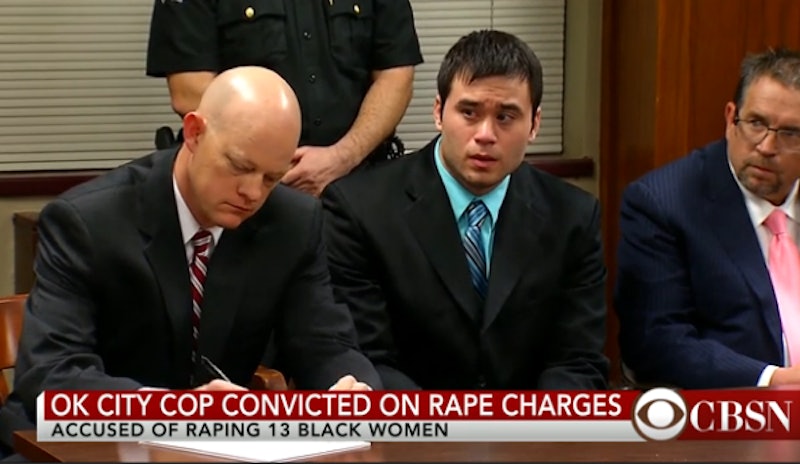 According to the narrative presented by Oklahoma City prosecutors, former police officer Daniel Holtzclaw used race to bully his rape victims into submission — a story with which an all-white jury of eight men and four women seemed to agree. After hearing both sides of the case, jurors in the case against Holtzclaw, who was charged with 36 separate counts of sexual assault and rape and convicted of 18 on Friday, dropped the hammer, recommending a whopping 263 years in prison for his crimes against his 14 victims. Thirteen of those victims were black.

"We're going to ask the judge to make sure that this defendant never sees the light of day," District Attorney David Prater said in a statement following Friday's conviction. "And we're going to ask him to run consecutive, every count."

Throughout the case, several of the victims alleged that they were afraid to come forward about Holtzclaw's crimes because of their race. "I didn't think anyone would believe me," one of Holtzclaw's victims told the court in November. "I'm a black female." The woman said that she had been sitting in a parked car in front of her home in February 2014, when the officer pulled up and asked her to get into the back of his police vehicle. According to the victim, Holtzclaw asked her if she had any drugs on her, to which she replied by pulling up her shirt.

"I raised my shirt up half-way and that wasn't good enough," she told jurors, explaining that she then lifted her shirt to expose her breasts and that Holtzclaw had touched both of her bare breasts with his hands. When the prosecution asked why she had lifted her shirt all the way, the woman added, "Because I didn't want to go to jail, [and he had told me] 'I'm not going to take you to jail, just play by my rules.'" Holtzclaw visited the woman at least once more in the months that followed, with the same outcome.

During the course of the investigation, it was revealed that Holtzclaw, a former college football player for Eastern Michigan University, had targeted black women in their 40s and 50s (although a few victims fell outside that age range), largely within the poorer neighborhood of East Side, Oklahoma City. "These were women he knew were invisible to the justice system, whose lives and stories would not be believed over his, whose sexuality would not be protected and defended in society at large or by the legal system in Oklahoma," wrote NBC's Jason Johnson in an editorial back in November.

Although Holtzclaw himself was technically half-white (his mother, Kumiko Holtzclaw, is Japanese), the officer specifically used whatever white privilege he could summon in order to bully his victims, according to multiple witness accounts, including one where Holtzclaw supposedly asked the woman if she had ever performed oral sex on a "white" man before. In another incident, the Oklahoma City officer crudely told his victim, "Bet you never ducked white dick," before sexually assaulting her.

From the looks of it, Holtzclaw leveraged his position of power and what he considered to be racial superiority to not only physically overpower his mostly black female victims, but to silence them into ever reporting his crimes — something that's statistically common, according to a 2006 report by The Washington Post, which pointed to federal studies showing that 13 out of 14 black women did not report their own attacks to the police.

When Daniel Holtzclaw stood in court on Friday and received his final verdict — guilty of 18 of the 36 charges against him, which included four counts of rape in the first degree and four counts of forced oral sodomy, according to court documents — he broke down crying, seeming to mouth the words, "How could you do this?" to jurors as he passed them.

Of course, with all the racially spiteful, gruesome details considered, it would have been a surprise if they hadn't.