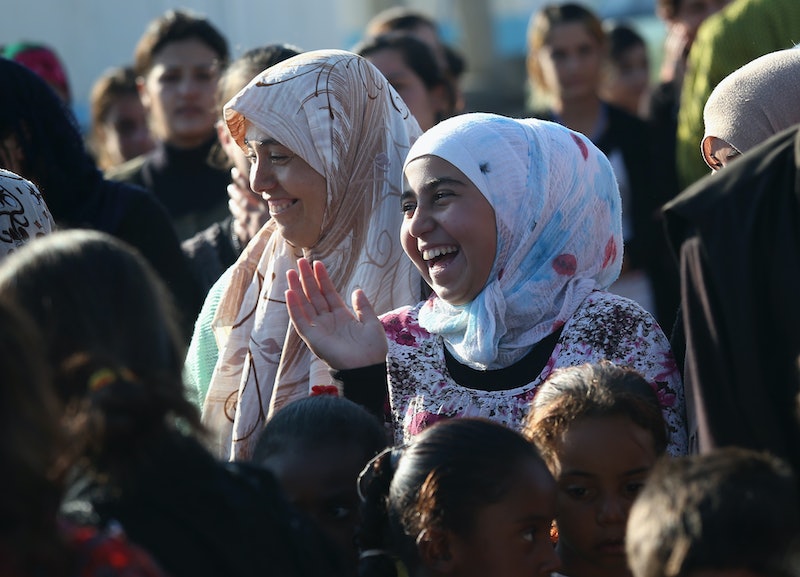 While American legislators and politicians dig in their heels, Canada is welcoming Syrian refugees in the best way possible. Plastering the front pages of several Canadian newspapers on Friday was a message of unity and openness, with The Toronto Star declaring unequivocally, "Welcome to Canada — Ahlan wa sahlan" (Arabic, meaning "Welcome"). The message was meant to bolster the spirits of the 163 refugees arriving by airplane at Pearson International Airport, where newly elected Prime Minister Justin Trudeau, Ontario Premier Kathleen Wynne, and a host of other dignitaries were waiting to greet them.

"We're so glad you’re here," Wynne told one family as they de-boarded the plane on Friday, handing them all winter coats, according to a report by The Star. The show of kindness was not wasted.

"We suffered a lot, [but] now, we feel as if we got out of hell and we came to paradise," said father Kevork Jamkossian and his wife Georgina Zires, who carried their 16-month-old daughter Madeleine to meet Wynne and the prime minister. "We really would like to thank [them] for all this hospitality and the warm welcome and all the staff — we felt ourselves at home and we felt ourselves highly respected."

Trudeau himself reassured the refugees that they had no need to fear what they were fleeing or worry about their new lives. "You are home," he told the crowd, calling them "new Canadians."

The road to Pearson International Airport was not necessarily easy for either party: On one side, thousands of Syrian refugees awaited their fates, wondering whether the western nation would accept them wholeheartedly. On the other side of the aisle, Canadian politicians bickered viciously over the complexities of bringing as many as 10,000 refugees across the country's borders by the end of the year — although the idea of barring them from entry entirely did not come up, at least in significant quarters.

According to a report by the BBC, Immigration Minister John McCallum confirmed that all 10 of Canada's provinces were in favor of accepting refugees, and that the discussion itself had primarily been non-partisan. "This is a great moment for Canada," McCallum told reporters. "This shows the way we really are. It truly is a non-partisan, national project."

In stark contrast, just south of the Canadian border, American politicians were busy getting their hands dirty trying to figure out ways of keeping the wave of Syrian refugees from flooding in, with 30 governors going so far as to ban refugees from entering their respective states. "It's clear the influx of Syrian refugees poses a threat, which is why Wisconsin will not accept new Syrian refugees," Wisconsin governor and former GOP presidential candidate Scott Walker tweeted in November, joining a chorus of other predominantly Republican voices in calling for a halt to immigration.

Still, there was hope. In response to a post about a Syrian refugee on the popular Humans of New York Facebook page Thursday night, President Obama left an inspiring message of hope, advising the man — a scientist who had lost seven family members in the civil war and had recently been informed that he would be resettled in Michigan — that he could still make a difference in the world. He wrote,

As a husband and a father, I cannot even begin to imagine the loss you’ve endured. You and your family are an inspiration. I know that the great people of Michigan will embrace you with the compassion and support you deserve. Yes, you can still make a difference in the world, and we’re proud that you’ll pursue your dreams here. Welcome to your new home. You’re part of what makes America great.

In Canada, Trudeau had equally uplifting words for the 163 refugees now under the country's official protection. "Tonight, they step off the plane as refugees, but they walk out of this terminal as permanent residents of Canada," said the prime minister. "This is a wonderful night where we get to show not just a planeload of new Canadians what Canada is all about, but we get to show the world how to open our hearts and welcome people who are fleeing extraordinarily difficult straits."