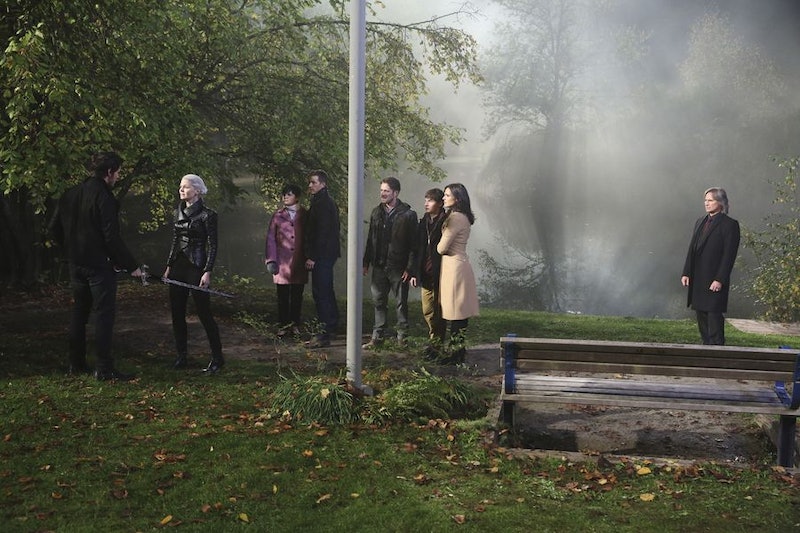 It pains me to say it, but Once Upon A Time Season 5's mid-season finale, "Swan Song", may have been the worst episode of the entire series, for multiple reasons. Character assassination? Check. Terrible messages to young girls that selfish, abusive murderers are worth sacrificing yourself and your family for? Check. Couple with less chemistry than drying paint shoved down our throats? Check and check. It was enough to make many longtime fans jump ship, but I'm staying put for Once Season 5B, because either I've been sipping some of the Charmings' hope juice or I just can't quit the glorious Lana Parrilla, who's the buoy keeping this show afloat at the moment.

After all, once Season 5B starts in the spring, we're headed to the Underworld to "rescue" Hook and take part in Emma's harebrained plot to rescue him by splitting her heart like her parents did. Given that I'm an unrepentant Swan Queen 'shipper (hello, I have eyes and ears and a working brain), you wouldn't think this upcoming plot would keep me on board, but I am because I know her plan is going to fail spectacularly and something will happen to give us the Emma we knew and loved for so long back. Maybe that's just the hope juice talking again.

Much of the second half of Once Season 5 remains a mystery and left to speculation at this point, but there are some things we know for sure about what we can expect come March 2016. While we're waiting for the premiere, let's collect the facts in one place, shall we?

Rumple Is The Dark One Again

One of the worst parts about "Swan Song" was that we spent the whole first half of Season 5 see Rumple go through a mini redemption arc, becoming pure of heart and embracing his new status as a hero of sorts... only for him to inexplicably and out of nowhere conjure up some random bit of magic that made no sense and was never explained to make him the Dark One again. While no one does the Dark One like Robert Carlyle, this storyline left a LOT to be desired (and a whole lot of major plot holes).

Belle May Or May Not Have A Baby

Emilie De Ravin is pregnant in real life, and since "Swan Song" showed Rumple leaving Belle undressed in her bed after some R-rated action ("It's a family show!"), it makes sense that showrunners might write her pregnancy in for ease. And for drama. Boy, is she going to feel dumb for falling for his crap again.

A Whole Bunch Of Old Characters Are Coming Back

Peter Pan, Cora Mills, Cruella De Vil... lots of old minor characters are popping back into the Once world, though most of them only for the 100th episode. "Aren't all of those people dead?" you're asking. Well, yes, but since the Storybrooke crew are headed to the Underworld, it all works out, right?

Zelena's In Oz... But Not For Long

In what seemed like a pretty weird regression for Regina, she shipped her dear sister Zelena back to Oz once she finally realized she could work that weird wand if she only believed in herself. Zelena was certain they were all going to die and she was planning to abduct hers and Robin's baby to turn her wicked, but Regina wasn't having it. If you're worried about missing Rebecca Mader, don't worry — she'll be back.

Since we're going to the Underworld, it only makes sense that we're introduced to Hercules and Meg, played by Jonathan Whitesell and Hannibal’s Kacey Rohl, respectively. They'll be around for Episode 13 and perhaps some others, but it's unclear what role they'll play so far.

That LGBT Storyline Is Still Coming

Executive producers Adam Horowitz and Eddy Kitsis promised that an LGBT relationship would be coming this season, and that it would have its roots in the first half of the season. Speculation has been on Mulan and Ruby, but given that they were on screen for roughly five minutes and had no chemistry whatsoever, I'm going to call that a red herring and keep my fingers crossed against all odds that the show won't squander its greatest gift in Regina and Emma's relationship and make them cannon already, for crying out loud. Will they be brave enough to go there? Eh, debatable, but maybe they just need some of that hope juice.