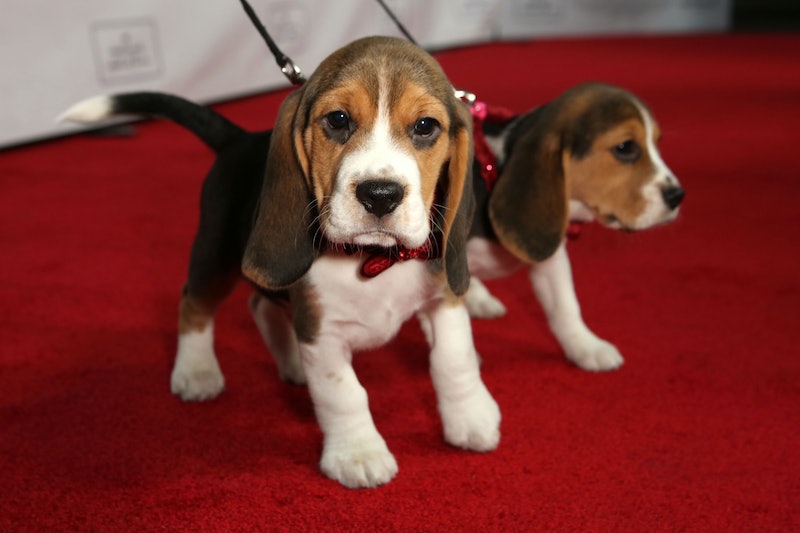 Test tube human babies are nothing new, but now the world's first test tube puppies have finally been born! Thanks to the efforts of scientists at Cornell University, the seven healthy puppies (some beagle, and some beagle and cocker spaniel mix) were just birthed by a female surrogate mother who was implanted with nineteen embryos.

Apparently, researchers have been trying to produce puppies via in vitro fertilization for over 40 years but, sort of surprisingly, they were never successful until now. The first human test tube baby was born in 1978, so this is one case where the human instance of an experimental medical procedure far preceded the animal version (seems like it's usually the other way around).

Dogs apparently have a differently timed reproductive cycle than humans, so previous attempts were not happening at the right point for fertility (who knew?). Researchers also had to recreate the conditions in the lab that a naturally-fertilized egg would encounter within a female dog — adding magnesium turned out to do the trick. Finally, they had to learn how to properly freeze and thaw fertilized eggs, especially since female dogs are only fertile once or twice per year, so timing the re-implantation was tough.

What is the scientific significance of the test tube puppies? Well, believe it or not, dogs and humans share several hundred of the same genetic characteristics (including both regular old traits and actual diseases), so being able to produce more dogs of specific breed blends easily could speed up scientific research.

But if it's too sad to think about medical experiments on poor puppies, focus on the more dog-friendly side of things: being able to breed dogs using in vitro fertilization gives us more control over their health, in the long run. Puppies conceived in a petri dish could be benefited in the future by gene-editing technologies that allow us to make them more resistant to cancer and other genetic diseases. Test tube puppies could also help us to support endangered canine species. Long live people's best friend!

More like this
Remember These Ancient Pieces Of '90s Tech?
By Lucia Peters and Emma Carey
An Honest Review Of The TikTok-Famous WalkingPad
By Kaitlyn Wylde
5 Crystals To Lower Your Anxiety
By Megan McCarty
5 Crystals To Manifest Better Sleep
By Megan McCarty
Get Even More From Bustle — Sign Up For The Newsletter