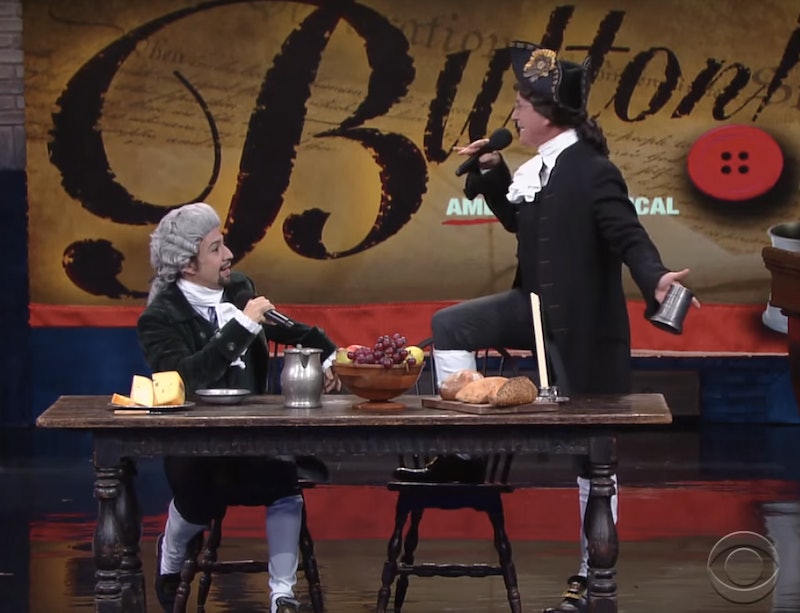 You'd pretty much have to be living under a literal rock at this point to not be hip to the hit show Hamilton and its amazing creator/star Lin-Manuel Miranda. The writer, actor, and director's Broadway musical about Alexander Hamilton has been hailed as revolutionary (no pun intended) and absolutely brilliant, and both adjectives apply. You only have to look into booking tickets for Hamilton in the next year (which, by the way, are impossible to get) to see how much Hamilton fever has swept the nation. But would Manuel ever consider writing another musical based on a popular historical figure? After seeing Miranda and Stephen Colbert rap battle in a fake Hamilton sequel, I certainly wish he would.

Colbert and Miranda teamed up for Button!, a musical about politician and Declaration of Independence signatory Button Gwinnett, who died a year after scribbling his name on the historical document. The sketch saw Miranda as John Adams and Colbert as Gwinnett, and the two men faced off for a rap battle after a squabble at an 18th century bar. If the description alone isn't enough to get you way too excited, then I'm not sure what to tell you, because it's probably my favorite thing I've seen all week.

Colbert — I'm sorry, I mean Button — was feeling the beat from the very beginning of the scene. Thankfully, Adams doesn't waste any time in spitting some bars, so you know it's about to get serious really quickly.

"I'm a founding father of this country and my name is John Adams," Miranda raps as the closing lines of his first part of the battle. He has a point, and given Button's much shorter resume, you might think that'd be enough to end things right there.

Sorry, Button, but most people actually don't. Even Miranda didn't know who Button Gwinnett was, sadly enough. No wonder Adams mistook him for a fan.

You know when Adams stands up out of his chair to get back into the battle that it's about to get real. It's almost mesmerizing how good Miranda is, isn't it?

Button's next diss comes in the form of bragging about how he gets all the ladies "unbuttoning" their "buttonholes." Very clever. Very clever, indeed. "Ask Abigail, she knows!"

Just amazing. So, so good.

To watch the full rap battle between John Adams and Button Gwinnett, click play below and try to contain your pure, unadulterated joy. It's hard, I know: