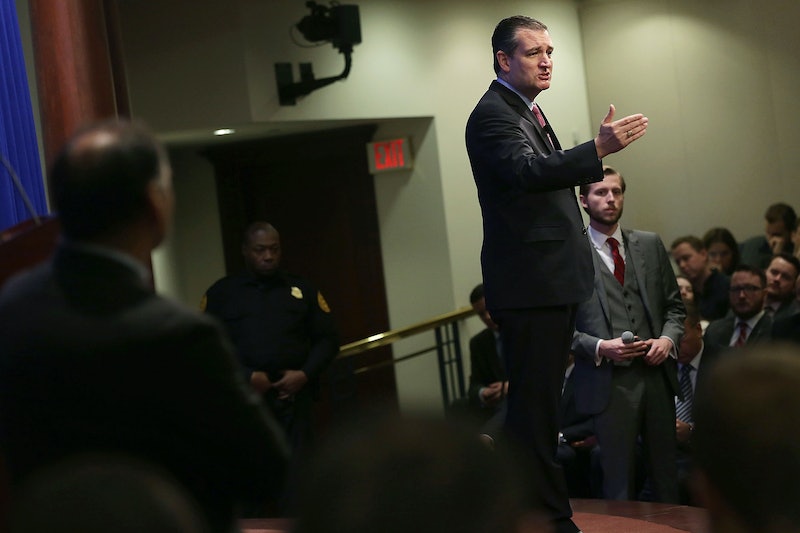 U.N. leaders unveiled a landmark new climate agreement in Paris on Saturday after weeks of tense discussions. The document sets forth a number of non-binding agreements meant to help lower current carbon emissions to pre-industrial levels, and was supported by 196 separate countries during Saturday’s historic vote. While the move was generally celebrated worldwide, in the United States, GOP candidates’ reactions to the Paris Agreement have been largely MIA.

Of course, the Republican Party itself hasn’t stayed mum on the topic. “This agreement is no more binding than any other ‘agreement’ from any conference of the parties over the last 21 years,” said Sen. Jim Inhofe (R-Oklahoma), who currently serves as chairman of the Senate Environment and Public Works Committee, in a statement. “Senate leadership has already been outspoken in its positions that the United States is not legally bound to any agreement setting emissions targets or any financial commitment to it without approval by Congress.”

In large part, Republicans have shunned the climate talks as nothing more than a power-move by the Obama administration, pledging to do everything in their power to rebuke any sort of climate legislation stemming from the Paris talks and passing resolutions that would prevent the president’s allies from passing strict EPA carbon emission measures.

Several Republicans insisted that the talks themselves were of little importance to the American public. “While the president is at this climate conference, the American people have that as a very, very low priority,” blasted Republican Sen. John Barrasso of Wyoming, in a statement, lamenting that climate deals were the last thing on most Americans’ minds. “They are focused on jobs, the economy and terrorism.”

However, within the 2016 presidential field, the response was generally one of complete silence. While rival Democrats put the issue to bed quickly (former Maryland Gov. Martin O’Malley lauded the accord as “ambitious” on his Twitter account; Vermont Sen. Bernie Sanders tweeted that the agreements were a step in the right direction, but didn’t go far enough), GOP candidates seemingly refused to comment on the issue at all, keeping in line with their collective tradition of not discussing environmental matters at length.

Texas Sen. Ted Cruz’s non-response was particularly surprising. Up until Saturday’s decision, the chairman of the Senate Subcommittee on Space, Science, and Competitiveness had been vocal about his own opposition to aggregated climate data, telling members at a climate science hearing on Tuesday that evidence to the contrary mattered. “According to the satellite data, there has been no significant global warming for the past 18 years. Those are the data,” said Cruz. “The global warming alarmists don’t like these data — they are inconvenient to their narrative. But facts and evidence matter.”

On Saturday, however, Cruz’s team avoided commenting on the historic agreement — and the senator wasn’t alone. Out of the 13 candidates in the 2016 Republican field, not one responded to requests for comment or posted any official statement on social media.

Perhaps hoping to avoid discussion on the matter and avert the public’s attention to topics they deemed more worthy of their time, the GOP candidates stayed far away from any talk of the momentous Paris agreement on Saturday. But with climate change becoming an increasingly urgent talking point in both the worlds of science and politics, it might be better if the Republican field rethinks its strategy.