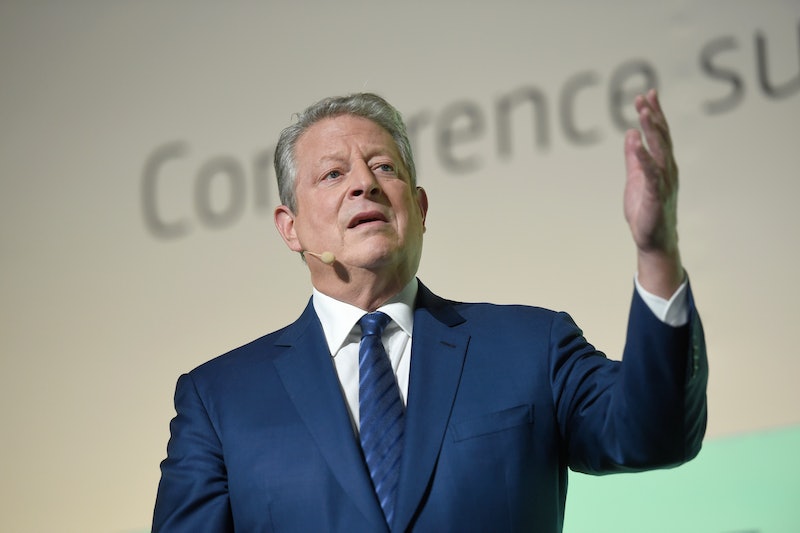 On Saturday, the United Nations finalized the biggest international agreement on climate change ever, an accord signed onto by representatives of nearly 200 countries. It's been a rare cause for celebration by environmentalist groups — even though it's far from a panacea, and activists, advocates, and scientists alike surely wish it went further than it does, it figures to be a major step towards reckoning with climate change. As such, the American perhaps more associated with climate change than any other had to weigh in, right? So, what's Al Gore saying about the UN climate accord?

Gore, of course, served as Vice President of the United States from 1993 to 2001, and in the 2000 presidential election, he lost one of the narrowest, most bitter losses in American history, winning the popular vote but losing the electoral college after the Supreme Court's decision in Bush v. Gore to halt the Florida recount. Despite falling tantalizingly short of his presidential ambitions, however, Gore has left an indelible impact — he went on to star in the Oscar-winning 2006 documentary An Inconvenient Truth, which sounded the alarm bells on climate change in a big way. In short, the moment news broke of the UN's groundbreaking accord, you knew Gore was going to weigh in. And that's exactly what he did, in a statement posted on his website on Saturday.

Today, the nations of the world concluded a bold and historic agreement, clearly demonstrating that the global community is speaking with one voice to solve the climate crisis. Years from now, our grandchildren will reflect on humanity’s moral courage to solve the climate crisis and they will look to December 12, 2015, as the day when the community of nations finally made the decision to act.

This universal and ambitious agreement sends a clear signal to governments, businesses, and investors everywhere: the transformation of our global economy from one fueled by dirty energy to one fueled by sustainable economic growth is now firmly and inevitably underway.

The components of this agreement, including a strong review mechanism to enhance existing commitments and a long-term goal to eliminate global warming pollution this century, are essential to unlocking the necessary investments in our future. No agreement is perfect, and this one must be strengthened over time, but groups across every sector of society will now begin to reduce dangerous carbon pollution through the framework of this agreement.

The Paris agreement represents the ceaseless efforts of civil society, governments, business, and investors, all of whom have dedicated themselves to this cause. Most of all, thanks are due to the French government, led by President Hollande and Minister Fabius, and the United Nations, led by Secretary General Ban Ki-moon and Christiana Figueres and her team at the United Nations Framework Convention on Climate Change.

Make no mistake: the fight against climate change is the defining issue of Gore's life, so Saturday had to be a satisfying day, even though the terms of the accord won't solve anything on their own — it's not legally binding, owing in part to the virtual impossibility of getting such an agreement through the Republican-led U.S. Congress. He didn't have to wait around to hear the news secondhand, either, as he was in attendance at the COP21 conference in Paris when the announcement was made.