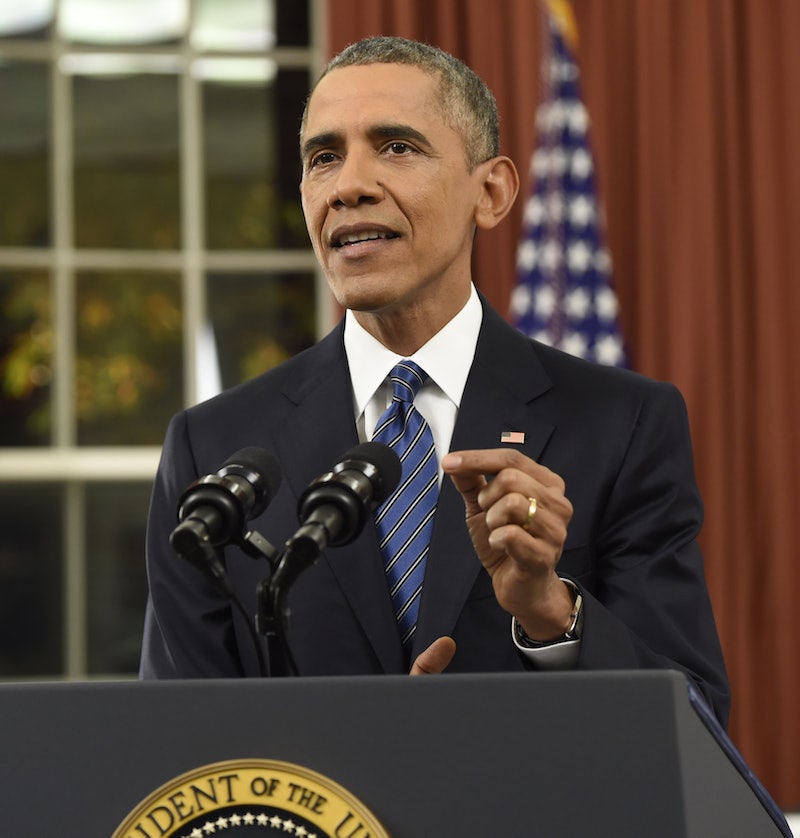 On Saturday, representatives of 195 United Nations states reached a landmark agreement, undeniably the biggest international accord ever struck to confront the looming threat of climate change. The news spurred countless reactions from across the political spectrum, in countries all across the world, and of course, the United States has also weighed in — In a speech delivered from the White House on Saturday afternoon, President Obama responded to the United Nations climate accord, praising the landmark agreement as "the best chance we've had to save the one planet we've got."

Despite the heightened focus that the Obama administration has placed on climate change, especially in the waning months of his second term — Obama himself highlighted its domestic effects while touring Alaska earlier this year — he hasn’t escaped criticism from environmentalist movements, owing to his approval of some new offshore oil and gas drilling operations, including in the Arctic.

But on Saturday, Obama was clearly looking more to emphasize the value of the hard-fought international accord, rather than dive into the finer points of environmental policy. To do so, he praised the goals that the accord set, and opted for a generational argument, invoking the grandchildren he hopes to one day have. Here's what he said, in part.

... The targets we've set are bold, and by empowering businesses, scientists, engineers, workers, and the private sector, investors, to work together, this agreement represents the best chance we've had to save the one planet that we've got. So I believe this moment can be a turning point for the world. We've shown that the world has both the will and the ability to take on this challenge. It won't be easy, progress won't always come quick, we can't be complacent. While our generation will see some of the benefits of building a clean energy economy — jobs created, money saved — we may not live to see the full realization of our achievement, but that's ok.

What matters is that today, we can be more confident that this planet is going to be in better shape for the next generation, and that's what I care about. I imagine taking my grandkids, if I'm lucky enough to have some, to the park someday and holding their hands, and hearing their laughter, and watching a quiet sunset, all the while knowing that our work today prevented an alternate future that could've been grim. That our work here, and now, gave future generations cleaner air, and cleaner water, and a more sustainable planet. And what could be more important than that?

Needless to say, it was a deeply personal way to round out his remarks. He didn't speak for all that long, relative to some high-profile presidential press statements — it lasted just over seven minutes. He wasn't the only American official to deliver a glowing statement on the occasion of the United Nations accord, either. Secretary of State John Kerry, who'd been actively engaged in the Paris climate talks, called it a "victory for all of the planet."