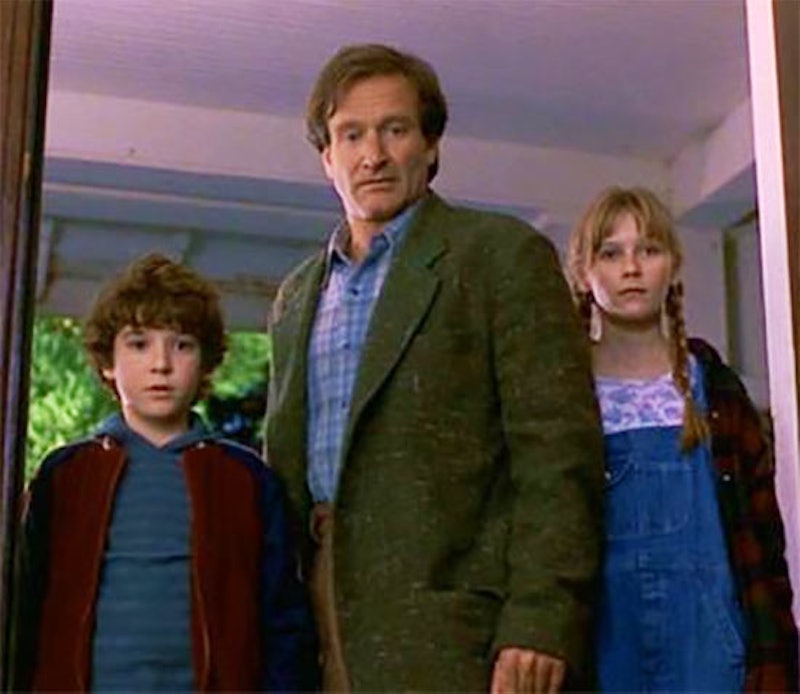 The last time I watched Jumanji was in 1995 when I was six years old. Today I got drunk and watched it as an adult in honor of Jumanji’s 25th anniversary and I had some very different thoughts on the movie. Before I get to those thoughts, let’s talk about how 25 years ago the magnificent Robin Williams starred in a movie that would change the way I looked at board games for the rest of my life (until today anyways). I always dreamed that one day a game would come alive. To be perfectly honest, I don’t feel that way anymore. In fact, I hope to never encounter bats, giant spiders or a fully grown lion in my entire life.

Haven’t seen it in a long time? Let me refresh your memory. In 1969 Alan Parrish and his friend Sarah Whittle play a game called Jumanji and he gets sucked into the board game for 26 years until two kids, Peter and Judy release him by accidentally playing the game. Now the four of them have to finish the game in order to end all the horrible things happening to the small town they live in. It’s pretty awesome, but being a drunk adult and watching it, is a whole new experience that I highly encourage. Here are things I noticed while rewatching Jumanji in honor of Robin Williams and the 25th anniversary.

1. This 'Night At The Museum' doppelgänger

It seems that Robin Williams was meant to play Teddy Roosevelt even before he was cast in the Ben Stiller films.

2. Who Are These Jerks Anyways?

Why are these kids randomly chasing Alan to his factory? I wish we got to see what came of these douche bags. Probably nothing.

3. The Guy From Titanic

The dad is definitely a familiar face! He played Bruce Ismay in Titanic. He was the terrible human being who owned the Titanic, and the reason there were not enough life rafts.

4. They Ignored The No. 1 Rule In Movies

If boxes are locked, there’s probably a damn good reason for it. Why do kids always have to be so curious?

5. This Movie Is Actually Terrifying

I’m not sure why as a kid I thought it would be so awesome if Jumanji was a real thing. As an adult, I am questioning everything. The bats. The spiders. Not a fan of this IRL.

Definitely forgot that Kirsten Dunst was the main little girl in this movie. This might be her best role (next to Bring It On, of course).

I seriously didn’t know this movie was full of famous faces. Bebe Neuwirth from Cheers and Bonnie Hunt from The Bonnie Hunt Show, among many other things, are both stars of the movie.

9. This Game Is Longer Than Monopoly

For all those people out there who think Monopoly is the game that never ends, they’ve clearly never played Jumanji.

10. Sarah Whittle Is Kind Of A Jerk

You’re best friend disappears and you don’t go back to the board game to get him out? You let him stay trapped there for 26 years. That’s kind of a dick move Sarah Whittle.

11. Their Aunt Is The Worst Parental Guardian

They skipped out on school, animals are attacking the town and she has no idea that any of this is actually happening? I call BS on that. How could you not know anything was wrong? Also it took her till the afternoon to call them and check in on things.

He obviously wants to murder people.

13. This House Is Getting Destroyed

That house was seriously destroyed. I would be flipping out if I just bought that and came home to what used to be my house. As a kid I hardly noticed, but as an adult I kept wondering about the property value. Ew.

Those monkeys were monsters and shoplifters.

Tug on my heartstrings, why don’t ya?

Probably the most shocking thing of all is the fact that Laura Bell Bundy played little Sarah Whittle and I didn’t even notice. She looks so different these days!