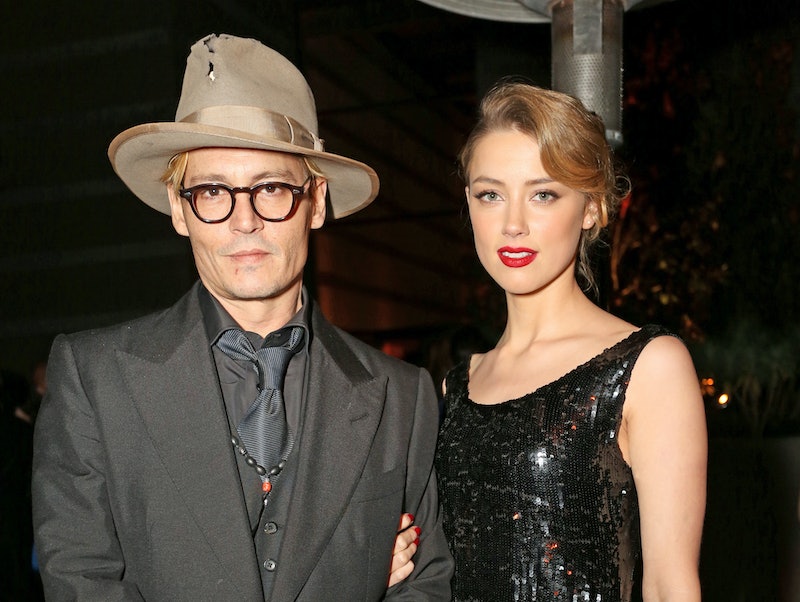 Hold on to your hats and your various scarves and your glasses and your chains and all your other boho chic accessories, because Johnny Depp and Amber Heard are engaged according to new reports. Heard was spotted wearing what appeared to be an engagement ring earlier this week, but it was unclear if the couple really were engaged. Sometimes a girl just wants to wear a giant rock, ya know? But now, according to sources close to the couple, it sounds like they actually are planning to be married.

A source told Us Weekly, "The proposal happened a while ago. She just didn't wear the ring." This story is likely considering Depp and Heard have been together since June 2012, but only made their first public (well, red carpet public) appearance together last week at the Art of Elysium's 7th Annual Heaven Gala. According to another source who spoke with Celebuzz, "It happened on Christmas Eve. Amber really took her time to make up her mind.”

Depp and Heard met when filming The Rum Diary in 2011, so really, they've know each other quite a long time considering this is a celebrity engagement. Depp was previously in a 14 year relationship with Vanessa Paradis with whom he has two children, Lily-Rose, 14, and Jack, 11. Paradis and Depp never married and to those of you out there saying, "Oh! He'll marry Amber Heard, but was with Vanessa for so long without marrying her. What's the deal?" Different strokes, for different folks, ya'll. All relationships are different and maybe she didn't want to get married. It's really not a crazy idea.

Now, with Heard and Depp engaged, we can surely expect a huge televised wedding that features five dress changes and an upside down cake. Just kidding. It'll probably happen and we'll all hear about it three months later just as it should be.