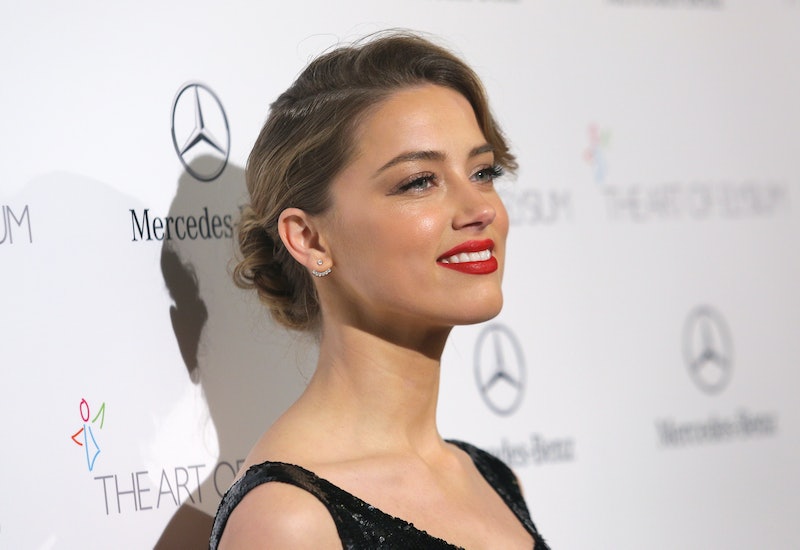 If you've seen this gorgeous actress in the news lately, it's probably because Amber Heard is engaged to Johnny Depp. After meeting on the set of their film The Rum Diaries and spending two years dating, the two stars quietly got engaged.

While I spent most of my middle school days pining over Johnny Depp (I still have the poster to prove it) I have to say that the person I'm far more interested in between the two is Amber. Amber Heard may have caught your attention with her (very short-lived) series The Playboy Club, her stunning GUESS perfume ad, or, if you're like me, her teen soap Hidden Palms, but be prepared to see Amber everywhere in the future.

And why not? Amber Heard is a really cool girl. Despite her movie star looks, Amber is actually quite different from many of the stars her age. The Texas-born actress has talked a lot about breaking molds and being herself within the Hollywood complex. She told Company Magazine this past November that she hates that women are seen as either beautiful or talented — rarely both.

I’ve had to take on roles that were superficial, girlfriend roles, but I’ve tried to put some power or strength into them. And I don’t think talent and beauty are mutually exclusive. It’s a shame that someone like Charlize Theron has to put on a bunch of weight and fake teeth to be seen as a talented actress.

It's nice to see an up-and-coming actress so unafraid to talk about the standards of Hollywood. As a bi-sexual woman — Amber dated photographer Tasya van Ree from 2008-2011 — Amber Heard credits Angelina Jolie as a role model, stating that Angelina "is an incredible force in terms of challenging the status quo."

It's important for young actresses to see that they can be themselves and still have success in Hollywood, and I'm glad that Amber Heard is known for being so candid in interviews. And then, of course, there are her actual acting chops — she's received praise for her recently released subversive horror film All the Boys Love Mandy Lane and will star alongside Johnny Depp once again in London Fields.

I think it's amazing that Amber Heard is getting attention, and while she may have her name attached to Johnny Depp right now, I doubt that she'll be thought of as merely his pretty actress fiancee for long.