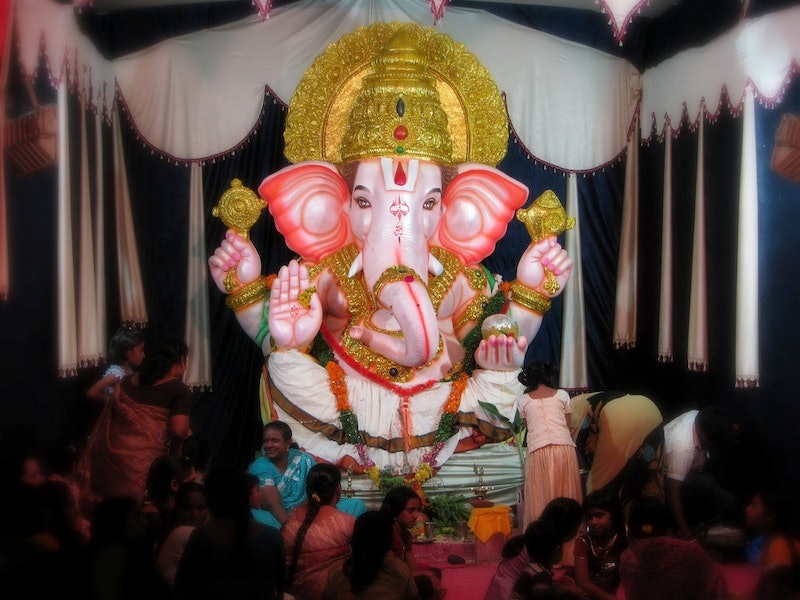 There are so many layers to the story of Christmas that it might as well be the movie Inception. First there's the religious: Baby Jesus being born and all that, then there's the historical: how Christmas took over the reins from the pagan holiday of Yule and combined the two things. That's not even getting into the secular pantheon of beloved characters that even non-Christians can name: Frosty the Snowman, Rudolph the Red Nosed Reindeer, Santa Claus, and that terrifying elf that lives in your house and spies on you for Santa Claus. They're everywhere, and they are in your face with delightful holiday cheer, even if sometimes it feels like we're all living in a greeting card from December 1 to December 26.

There's more to the holidays than that, however, wintertime has always burst with holiday joy! Throughout time immemorial, regardless of religion or region, there have always been awesome stories to tell and awesome celebrations to have. You can't throw a rock into December without hitting some sort of celebration of a winter holiday. And it is in that happy holiday spirit that I give you nine winter holiday folk tales from around the world and the traditions they inspire. From India to Italy, Scandinavia to Northern Arizona, there's an entire world of neat traditions out there that will breathe new life into the holidays. It's time to get jolly, no matter what you believe in!

1. Soyal, The Winter Solstice of the Hopi in Northern Arizona

The Hopi have lived in the northern part of Arizona for more than 1,000 years, and one of their most important ceremonies is that of Soyal, their winter solstice celebration. The Hopi believe that during this time the kachinas (spirits that watch over the Hopi) come down from their home in the San Francisco mountains to bring the sun back to the world. It's also a time for purification and prayer, and it's often thought that everything that happens in the coming year is arranged at Soyal. It's commonly celebrated by dancing, singing, and giving gifts to children. there's also a rich tradition of storytelling involved as well.

Created in 1985 by a Hawaiian Western convert to the religion to serve as a modern Hindu alternative to Christmas, Pancha Ganapati is a five-day festival devoted to the elephant-headed god Ganesha. Starting on December 21, each of the five days are devoted to a particular spiritual practice in Hinduism, and participating families often set up a shrine to Ganesha in their living rooms. Each day Ganesha is dressed in a different color that represents his five powers, called shaktis, which are not exactly "powers" by the superhero definition, and instead are levels of love and friendship you can feel toward the people in your life, building from family and ending in an outpouring of love for the god.

As for the story behind Ganesha, he's commonly thought of a god who makes life easier, one who removes obstacles, celebrates art, and brings about new beginnings. Apart from his many arms and elephant head, it's also said that he rides a mouse! His origin story varies from being the son of the god Shiva and his consort Parvarti (goddess of love), while other stories claim that he's the son of the elephant-headed goddess Malini, who conceived after accidentally drinking Parvati's bathwater, which had been thrown into a river.

3. Chana and Her Seven Sons, A Celebration of Women in Yemen

For the Jewish population of Yemen, the seventh night of Hannukah is set aside as a holiday celebrating women, and it's all thanks to Chana and her sons from the book of Macabee. The story has it that Chana was the mother of seven sons, and they lived during a time when a tyrannical king worked to destroy all Judaism. Chana and her sons stood up to the king, refusing to destroy their faith. As the boys were martyred one by one, Chana stood firm in her belief, and after her sons were dead (and all still faithful), Chana herself died. It's not exactly the most cheerful of holiday tales, but the remarkable strength that Chana showed in the face of adversity is an inspiration to any woman.

Iceland has its fair share of Christmas monsters, from the terrifying Christmas ogress Grýla who eats naughty children, to her sons the Yule Lads, prankster Santas who also sometimes eat people. This entry isn't about these creatures, however, it's about their pet cat. Jólakötturinn, or the Yule Cat is known as a giant, fearsome feline who stalks the snowy countryside on Christmas Eve and devours those who didn't receive new clothing to wear for the holiday.

While the story of the dangerous cat is so old that Icelandic historians are actually unsure of when it first arose, it's often thought to have been invented to combat laziness. Back in the day, seamstresses would work extra hard to make sure that there was enough new clothing so that no one would be eaten by the Yule Cat, and farm workers would work extra hard to have their work done by the holiday, when they would be gifted a new article of clothing from their masters. Don't worry, though! The existence of the Yule Cat was also used to encourage giving, not only to friends and loved ones but to the less fortunate. Not bad for a terrifying demon cat.

If you're old enough to remember the Kirsten American Girl doll, you already know where I'm going with this. The Feast of Saint Lucy is traditionally celebrated on December 13 and commemorates Saint Lucy, a martyr who acted during the Diocletianic Persecution (long story short, Romans were not fans of Christians during a time). Wearing a wreath crowned with candles on her head to light her way and leave her hands free, the fearless Lucy brought food to hiding Christians in the catacombs of Rome. It is mostly celebrated in the Scandinavian countries due to the idea that a festival of light would be a bit of a pick-me-up during their insanely dark winters. Traditionally, girls would wear a long white dress with a red sash (just like Kirsten did) and walk in processions holding trays of delicious rolls and cookies while others sing songs. Don't worry, boys were also allowed to get in on it too!

There are a lot of variations to the legend of Olentzero, the Basque version of Santa Claus, but the most common version is this: Olentzero belonged to a mythical race of people called the Jentillak, who were giants compared to normal humans. He lived peacefully until one day a cloud appeared in the sky, although it was only visible to one blind old man. The blind man interpreted this to mean that Jesus was going to be born soon, and asked the giants to be thrown off of a cliff so that he wouldn't have to live with this new religion that he did not know or understand. The giants obliged, but all tripped and fell off the cliff except for Olentzero. As the sole survivor, he embraced Christianity and swiftly turned into the merry gift-giver he is today.

Another popular origin story states that Olentzero was an abandoned newborn who was found by a fairy, given superpowers, and adopted out. He grew to be a kind and gentle man until one day he died saving children form a burning house. To honor his sacrifice, the fairy brought him back to life and gave him the job of giving presents to children. No matter what the origin story is, Olentzero sees like a pretty awesome guy.

7. Befana the Witch and the Feast of the Epiphany

Hate the lull that hits as soon as the clock strikes midnight on December 26? If you lived in Italy, the party would not only continue until January 6 when the Feast of the Epiphany hits, but also you'd get to believe in Befana the witch. The Feast of the Epiphany is mostly celebrated in Europe, and celebrates the moment when the Three Wise Men realize that Jesus is a thing, but the Italians throw an interesting little spin on it. Legend has it that Befana was a nice little old lady who lived by herself, when the Three Wise Men stopped by and asked for directions to find baby Jesus. She didn't know, but she offered them a place to stay, and in thanks they offered her a spot in their journey. She turned them down, but later had a change of heart, but by the time she gathered all of her presents and set out to follow them their tracks had all blown away in the snow. Because of this, Befana goes from house to house, leaving presents for all the children in Italy. It's also thought that she is a form of the Roman goddess Strenua, who brought in the New Year.

We have another Christmas witch, but this one isn't exactly the friendliest. Perchta was not originally a figure for Christmas, and in fact was once a goddess in her own right in the pagan pantheon of the Upper German region of the Alps. There she was considered an embodiment of fate as well as the souls of the dead, as well as having ties to several Norse goddesses such as Frigga and Freya.

It's been thought by Jacob Grimm (whose fairy tales you might be familiar with) that she has two forms: a beautiful snow maiden and an ugly old crone, and sometimes was thought to lead the Wild Hunt. However, as time moved on, she slowly began to become a member of Christmas lore, this mostly being because she had a tendency to wander from home to home in Midwinter (which eventually became the Twelve Days of Christmas), possessing full knowledge of who had been a hard worker that year. Those who had received a silver coin in their shoes, those who didn't (particularly girls who had not finishing spinning their flax in time) got their bellies slit open, their intestines removed, and the whole stuffed with pebbles and straw. Luckily for all of us, she doesn't live in the same country as the Yule Cat.

It's been a good year for Krampus given the fact that he's gotten his own movie (starring Adam Scott, no less!). To leave the Austro-Bavarian anti-Santa Claus off this list would do him a disservice, and I would definitely not want to get on his naughty list.

Originating in the 1600s, Krampus is thought of as a companion to Santa Claus (of which he has many), specifically brought around to punish children who have been bad. While there is no specific origin story that explains why Krampus came to be, Santa Claus was often known in Europe as an individual who dealt only with the good children. The rest of his companions were created in order to deal with naughty children, and Krampus with his devilish horns and penchant for excessive violence became one of the most popular figures. He even has his own night, December 5, which preludes the December 6 festival of Saint Nicholas that often kicks off the Eastern European holiday season.

On Krampusnacht (soon to be the name of my Death Metal Christmas cover band), Krampus would go from house to house, hunting down naughty children and throwing them in a sack to take to the underworld. All is not lost, however, because legend has it that Krampus has a bit of a weakness for schnapps, and will let you go if you offer him the alcoholic treat.