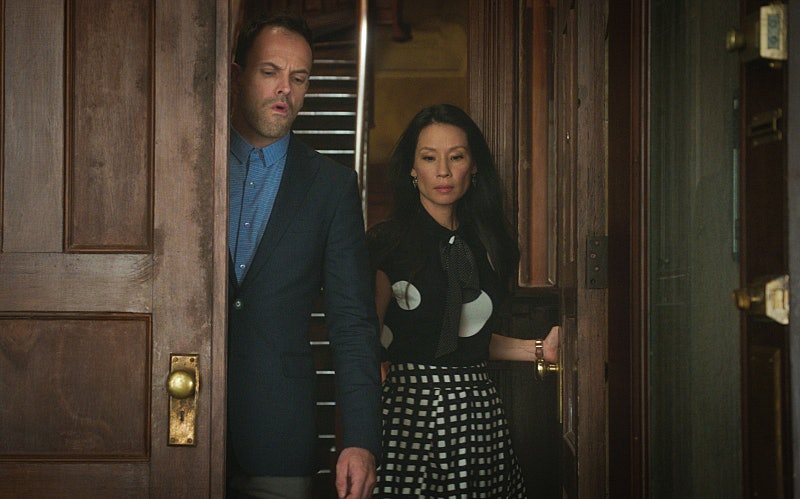 Elementary may not be big on cliffhangers, but that doesn't mean that, once the midseason finale airs on Dec. 17, I'm not anxiously awaiting its return. To me, it's one of those staple shows: You can always throw on an episode of Elementary without worrying that you need to block out a feature-film-length amount of time to watch it (like when I watch Fargo) or you'll be sucked into a five-episode marathon (like when I watch Jessica Jones). You can plug it in to those little blocks of time when you just need something to turn on when you want to veg on the couch for an hour. But, that only works if they're airing new episodes. So, when does Elementary return?

The good news is, you don't have to wait too long. New Elementary episodes start airing pretty soon in the new year: The show comes back on Jan. 7, 2016. That's the good thing about watching a show that's not a limited series — there are tons of episodes, so the network doesn't have to dole them out carefully. But, what's going to happen on the finale — and what's in store for the rest of the season? Here are some things the show definitely still needs to address.

Whenever Sherlock gets a visit from a relative, things don't go so well. (Remember Joan's fateful romance with Mycroft?) Morland Holmes seems like a pretty evil dude, and he's still hanging around New York City. We know he's going to play a big part in the midseason finale, but will he come back after that? My prediction is the second half of the season is going to have fewer stand-alone episodes and have more of a connected plot centered around Morland. I mean, why cast John Noble if you're not going to use him as much as possible?

Joan Gets An Arc

This season has (understandably) focused more on Sherlock, especially when it comes to his drug relapse and the toll that's taken on his personal life. While that's been a pretty meaty storyline, it means that Joan has been shoved off to the side this season. I hope that, when it returns, she gets a little more to do. Perhaps there's more coming with her newfound police nemesis — the one she had to fistfight for respect.

Watching Sherlock find clues to cases in the smallest details, then rattle off arcane and obscure information to solve a case is certainly fun, but it's easy to turn Sherlock into a superhero that way. The show is best when it exposes his vulnerabilities. This season's relapse storyline has definitely exposed his raw edges, and I hope the show keeps it up.

Yes, I loved seeing Sherlock and Watson delve into the history of early video games in an episode like "The Games Underfoot." (That one took its inspiration from the ill-fated E.T. Atari game.) I really want the two of them to have to poke around more unusual subcultures for cases. Maybe there are some LARPers out there who need a detective?

Clive's the unsung hero of the show, and he should definitely make more cameos when Elementary returns in January.