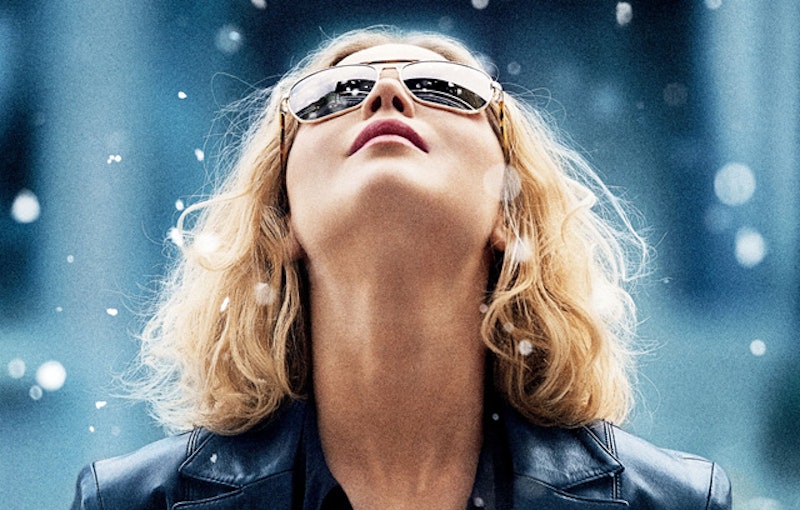 In the new movie Joy, Jennifer Lawrence plays a young, single mother of two who gets fired from her demeaning airport job and finds herself broke, living at her mother’s house, and wondering how in the hell her life got so screwed up. As a kid, she had high hopes. She had dreams. Her grandmother (Diane Ladd), tells an elementary school-aged Joy:

“Listen to me. I’ll tell you what’s gonna come of you. You are going to grow up and be a strong smart young woman. Go to school. Meet a fine young man. Have beautiful children of your own. And you’re gonna build wonderful things. And that is what is going to happen to you.”

As supportive and sweet as her grandmother was way back when, the adult Joy isn’t building wonderful things, and she doesn't feel strong or smart. She feels defeated. And tired. That is, until she has an epiphany about a mop that might just become a household miracle, if only she can get the money to make the thing and market it. In a sense, Joy is kind of like a domestic Katniss Everdeen, even without the connection of Lawrence in the lead role — she doesn’t have to save her civilization with her archery skills, but she does have to save herself, and pull herself out of a dead-end, uninspired life. And so, with a lot of grit and a loan from her dad’s wealthy girlfriend, she does.

Like the classic Melanie Griffith movie Working Girl, Joy is a movie that’ll inspire every female entrepreneur, whether you’re dreaming of making a Miracle Mop-like product or working night and day to build a game-changing app. Unlike Griffith’s character in Working Girl, though, Lawrence's Joy doesn’t prance around in a garter belt or say things like, “I have a head for business and a bod for sin,” (as great as that line is). She doesn't even have a love interest. There’s no man to swoop in and make it all better. She does it all on her own, and it makes Joy a feminist win of a film.

Here's what makes Joy such a must-see for women, but especially female entrepreneurs. Some spoilers ahead!

1. It Showcases The Importance Of Imagination

As a kid, Joy had a wild imagination, but it got lost along the way when marriage and kids and bills became the priority. When she has an epiphany about a self-ringing mop, though, she trusts her gut and does whatever it takes to get her product made. She goes into debt and mortgages her mom’s house – not the wisest financial decisions, but entrepreneurs have to take risks. Eventually she becomes a multi-millionaire, and it's due in part to her reliance on her imagination.

2. It's All About Passion

There’s a scene in which Joy draws the prototype for the mop with her daughter’s crayons and paper. She’s feverishly sketching, pacing around the room, and jotting down notes about her idea. She’s got a bee in her bonnet, basically, and if you’re going to put blood, sweat, and tears into a project, you better be passionate about it. Joy is, and all that maniacal sketching pays off eventually.

3. It Demonstrates The Need For Perseverance

About 99.9 percent of entrepreneurs have to struggle and suffer before their ideas actually pay off. Joy’s path to fame and fortune isn’t smooth (she gets ripped off, family members turn on her, and it's freakin' tiring), but she pushes ahead no matter what gets in her way. There are about 200 opportunities for her to say, “Screw it, I’m going back to my old job,” but she never does. It’s just not an option.

Joy has two young kids, a mom who stays in her bed all day watching cheesy daytime soap operas, an immature ex-husband who lives in her basement, a deadbeat for a dad, and a business to create. Like many women, she’s the ultimate muti-tasker, which you have to be if you’re starting a business. Having a lot of annoying family crap to deal with while trying to become the next titan of industry is just part of the deal, and she pushes through.

5. It's A Reminder That Delegating Matters

Joy’s family members don't always act like a bunch of jerks. Sometimes they actually help her, and she’s good at delegating what needs to be done. She recognizes that taking everything on herself would not only be hard, but unhealthy; it'd make her exhausted and less productive, not to mention likely to have a nervous breakdown. So instead, she admits when she needs help and lets others support her work.

6. It Proves That Having Patience Is Key

Joy has debt, kids, and laundry to fold. She's stressed. On top of that, she lives in her mom's house, where her ex-husband and estranged dad reside in the basement. To handle the chaos, Joy becomes the mediator, the patient one, and it's a quality that serves her well later on in business.

7. It Emphasizes The Need For Independence

When Joy is about to go on QVC for the first time to try and sell her mop, the producer dresses her up to look like she’s a character on Dynasty —big hair, loads of lipstick, shoulder pads, a prim but sexy skirt, and heels. She’s not having it, though. She disappears into a dressing room and emerges in a white button-down and pants with much calmer hair — basically, herself. It's as if she's saying, “This is me and this is how I’m going on TV, whether you like it or not.”

Later, when she finds out she’s been getting ripped off, she flies to Texas to have it out with the corrupt business tycoon who’s been wronging her. It proves that no matter the challenge, she's up to the task — and at the end, she becomes a crazy successful entrepreneur all on her own. There’s no romance, no leading man to take the credit or do her work for her. It’s just her, and it makes her success all the more sweet.

So check out Joy if you want to see out a story about a female entrepreneur who kicks some serious butt, all on her own — perhaps it'll even inspire you to get your own Miracle Mop-like creation in the works.

More like this
Read The First Pages Of Emma Rosenblum’s Highly Anticipated Debut, 'Bad Summer People'
By Samantha Leach
What Joyce Carol Oates Knows About Fame
By Erin Somers
Is 'The Woman King' Based On A True Story? The Female Agojie Warriors Did Exist
By Radhika Menon
Women Around The World Are Cutting Their Hair In Solidarity With Mahsa Amini
By Darshita Goyal
Get Even More From Bustle — Sign Up For The Newsletter