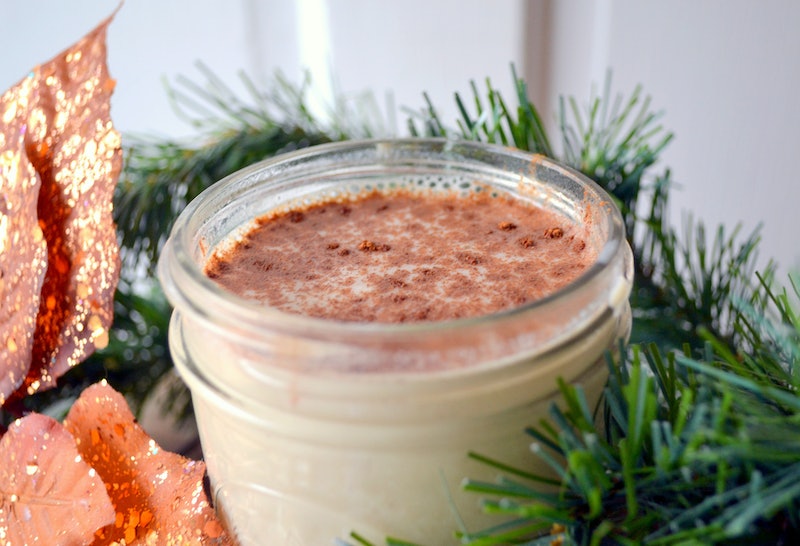 The official List of Legitimate Holiday Questions includes enquiries such as: Is Santa Claus real? Does he really watch me when I sleep, and am I supposed to like candy canes? But perhaps the biggest holiday mystery of all is this: what is eggnog? This Christmastime enigma is back again to make us all wonder: What is this creamy thick drink that seems to be part milk, part melted ice cream? Who let this happen? Do I like this? Oh yes, I think I like this. Wait, what is this stuff?

If you look up eggnog on Google, the first thing you will find is that it also goes by the disgusting name of “egg milk punch.” I have to believe the inventor of eggnog decided to string together the three least appetizing words he or she could think of when it came time to name this concoction, but no one wanted to drink “thick egg milk,” so they were forced to go with option two, “egg milk punch,” instead. Eventually, everyone came to their senses and decided that was too weird too, and thus eggnog was born.

So what's in this favorite seasonal beverage, you ask? Let's break it down. I'm afraid the eggnog ingredients list is disappointingly boring. Overall, it's not that weird of a drink. Your standard eggnog is simply made of cream, milk, vanilla, an alcohol of some kind, and yes, eggs. Of course, there are variations on what ingredients and toppings you choose to include, but that’s all you need to get started. Here is a simple eggnog recipe you can try, courtesy of The Kitchn. You can taste test to see what kind of alcohol goes best with eggnog (I personally prefer peppermint schnapps).

In an effort to be transparent, I have to admit that I like eggnog. I hate the name, but I like the drink. It reminds me of being home for the holidays, drinking it in the kitchen when everybody else had gone to sleep, counting down the days until Christmas. I honestly think it’s the perfect holiday drink. For people who are vegan, or lactose intolerant, there is eggnog hope for you too. Many companies now offer eggnog with milk alternatives like soy-, rice-, almond- or coconut-milk.

But beware — eggnog is not the innocent, albeit weirdly named, holiday drink it may seem. The nonalcoholic version, when made with fresh eggs, can cause salmonella. In 1982, four residents of a New Jersey nursing home reportedly died, and 120 others became sick from eggnog-related salmonella. So be wary of cooking up a fresh batch.

That said, it doesn’t look like picking up a quart at the store ever hurt anyone. Try topping it with cinnamon, mixing eggnog with coffee, and of course, spiking it with alcohol.