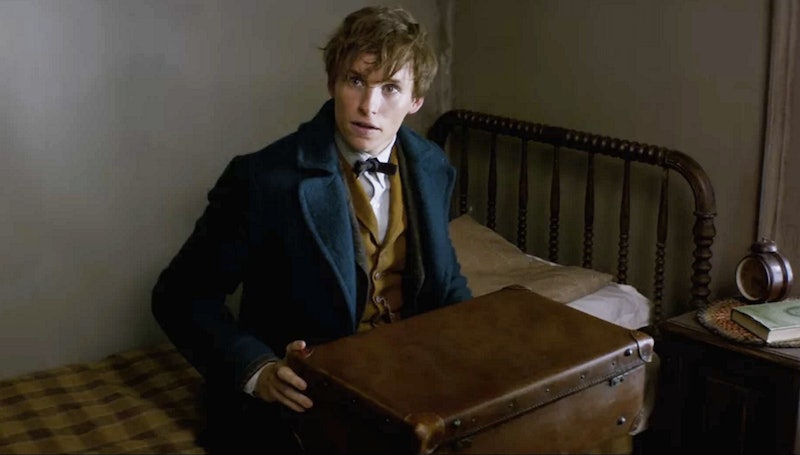 We were warned, and now it's finally happened. Oh, don't worry, this is a good thing. The Fantastic Beasts and Where To Find Them trailer has been released, and I'll just stop there so you can take a moment to skip below and watch it. It might be under two minutes — even less when you consider how much of it is looking at the logo or a dark screen before it's illuminated by a Lumos Maximos — but it's still everything. Not only because of the anticipation that surrounds this movie, but because we finally get to see Newt Scamander, Tina Goldstein, Seraphina, Percival Graves, and Jacob Kowalski in action. (Percival Graves as in Colin Farrell, in case you forgot. I know, I know. I know.) Since I know you'll be examining this Fantastic Beasts trailer for the rest of the day, let me deep dive into what you can expect here.

The trailer starts in darkness until Scamander casts a Lumos Maximos. Then, we follow Tina Goldstein (Katherine Waterston) as she takes Newt's case to the MACUSA, presenting in front of Seraphina (Carmen Ejogo), to inform them that the case contained numerous magical creatures and they've since escaped. (So, basically, it's a wizarding Pandora's Box situation. Thanks a lot there, Newt.) We see Percival Graves (Colin Farrell) examining a hole in the side of a building, followed by Newt opening the case to unveil growling noises. But he opened it "just a smidge," you guys! No big deal! Finally, we see Newt running out into the street with No-Maj Jacob Kowalski (Dan Fogler) behind him, the former blasting something or someone with his wand. The blast becomes the logo for the film.

It's the kind of thing you need to see to believe, because, if there's one thing that the Harry Potter fandom does best, it's examine the little details to get a whole plot. There is sure to be a longer trailer released eventually, but, until then, this is more than I ever even expected, more than I ever even imagined, and more than enough to get me to pre-order a ticket as soon as I can. Check out the trailer below.

More like this
These 25 International Horror Movies On Netflix Prove Fear Is A Universal Language
By Bustle Editors
The 50 Most Powerful Characters In The Marvel Universe, Ranked
By Johnny Brayson and Nola Pfau
Lin-Manuel Miranda & Tituss Burgess React To 'Little Mermaid' Casting Backlash
By Radhika Menon
Lego Just Announced Its 'Black Panther' Set Release Date
By Maxine Harrison
Get Even More From Bustle — Sign Up For The Newsletter