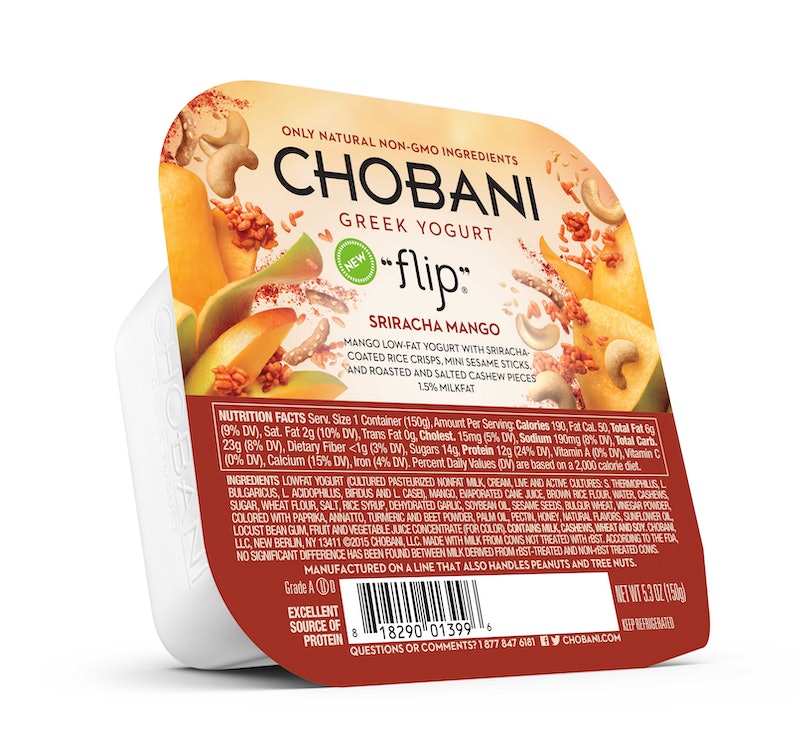 We know that Sriracha is trendy. We also know that Greek yogurt is trendy. But the two combined? Yes, I, too, was suspicious, but Chobani Sriracha yogurt is a thing now and people swear it tastes good. Who knew, right?

Savory yogurt itself is far from new — it's a staple in cooking across the globe, particularly in Middle Eastern cuisine. There are also a ton of health benefits from eating yogurt with live cultures: Digestion and immune function, all get amped up by the addition of probiotics to your diet.

But in the United States, we tend to view yogurt as something slightly sweeter, almost more like a dessert than a snack or meal accompaniment. That's where Chobani's new Sriracha Mango and Chipotle Pineapple flavors come in: Part of the Chobani "Flip" line, they come complete with "sidecars" containing salted cashews, mini sesame sticks, and Sriracha-roasted rice crisps. The mango yogurt plus the sidecar snacks bring a combination of sweet and savory most of us don't commonly see in our yogurt. According to BuzzFeed, these new Flip flavors, along with 14 other new products, are slated to hit stores at the beginning of 2016.

Honestly, when I first heard about the flavor, I was... skeptical. But the more I hear about it, the better it sounds. I think, at least. I don't know — it's still early in the morning and maybe my brain is just not awake yet.

I'm curious, in any event — so in case, like me, would like to know more about this whole savory yogurt thing, here are a few more savory yogurt options that you can buy straight off the shelves (because I'm lazy and unskilled in the kitchen. Don't judge).

Angela and John Fout began their small-batch yogurt company, Sohha,after searching for a preservative-free, gelatin-free, no sugar added yogurt to feed their baby daughter. Failing to find one that met those qualifications, they began to make their own, inspired by Angela's Lebanese mother. Their recipe contains three main ingredients: Locally-sourced whole milk, live cultures, and sea salt. Unfortunately for me (and maybe you), Sohha is so local and fresh that they only deliver to Brooklyn, Manhattan and Long Island at the moment. Sigh.

Siggi's yogurt is like the savory yogurt starter pack for those of us with a massive sweet tooth. Thicker and with a low sugar content, this Icelandic-style yogurt is like, "Hey, I know you only like yogurt that essentially tastes like ice cream, but look at this whole world of non-sweet yogurt, though!"

Most of Siggi's flavors are fruity (and thus not quite so savory), but there's also good ol' plain, which you can doctor up with whatever savory garnishes you like. Siggi's is also available in a ton of stores across the United States, so that's awesome.

Blue Hill Far, a grass-fed dairy company from the Berkshires, makes all kinds of kooky yogurt flavors, including Sweet potato, tomato, and — yep — parsnip. Parsnip is apparently the sweetest of the yogurt options, due to the root veggie's higher natural sugar content.

Blue Hill Farm yogurts are sold in Whole Foods throughout the country, as well as in specialty grocery stores. Which, duh, how many people do you know who go to the bodega for parsnip yogurt?

Small batch Persian yogurt that self-describes as "saucy?" Sounds awesome. Count me in. The White Moustache also sells labneh, which is a slightly thicker, "yogurt cheese spread"; it's also amazing.

Once again, this brand is only available in NYC, because ugh. But it is available in a pretty extensive list of grocery stores, so maybe someone could, like, send me some?