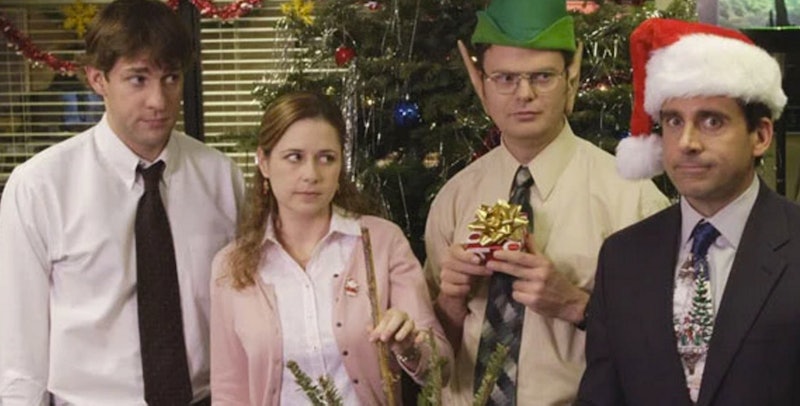 The Season 2 Episode 10 episode of The Office’s entitled “Christmas Party,” aired December 6, 2005 — 10 years ago. It was the first of many Christmas parties celebrated at Dunder Mifflin, and the events that unfolded in the episode set the groundwork for future inside jokes and plot points. In honor of the 10th anniversary of “Christmas Party," I re-watched the episode and was surprised at all the new things I noticed, or had forgotten even happened. There are so many things to catch when you re-watch The Office’s first Christmas episode.

This early episode in the nine-season series helps to introduce storylines with the casts’ minor characters. We start to see Creed’s weird resourcefulness (with Jim’s hand-me-down Secret Santa gift), Bob Vance of Vance Refrigeration is a guest at the party as Phyllis’ then-boyfriend, and we see the first of Meredith’s alcohol-riddled exploits. The episode is also an important milestone for Jim and Pam in the will they or won’t they portion of their journey.

After 10 years, the episode continues to be a significant one for fans of the show. Here are 17 things you notice when you rewatch The Office “Christmas Party” — which, by the way, is streaming on Netflix along with the show’s six other holiday episodes. ‘Tis the season to marathon old Christmas episodes…

1. Everybody Looks So Young

I can't believe this episode was 10 years ago! The Office looks so different. Jim has his floppy hair and a baby face — and there is no Nard Dog in sight!

2. Jim Gets Pam A Special Gift… With A Card

Jim gets Pam a thoughtful Secret Santa gift ... a teapot she has been wanting stuffed with thoughtful inside jokes — a high school* yearbook photo she has teased him about, a mixed tape, a hot sauce packet that Jim recalls Pam thought was ketchup a few years ago (yeah, he saved it), and a card, because on Christmas you should tell people how you feel. Wow, Jim was crushing hard. *Fun fact, John Krasinski went to high school with B.J. Novak, IRL.

Michael is super into his digital camera. Remember people, this was before the iPhone.

4. The Origin Of Angela’s Poster

The baby poster that causes Oscar so much grief in the future has an origin story. It was bought for Angela by Toby as a Secret Santa gift. Thanks, Toby, jeez.

5. Pam Gets Her Gift

And it's all going according to plan. That is, until ...

Again, iPhones weren't a thing yet. P.S. Michael leaves the price tag on the video iPod. It cost $400 10 years ago!

Though we previously saw him ruin Halloween this season (firing Devin), this episode sets the tone for all of the Christmas parties Michael will spoil with tantrums and schemes in the future. For what it's worth, I like Phyllis's oven mit. Too bad it ensues a mean-spirited game of Yankee Swap.

This is a conversation you may have all actually had. Do you call it "Nasty Christmas, "White Elephant," or something else?

The scene where Michael unloads his oven mit on Meredith and explains reverse psychology is vintage Michael.

Reverse psychology is an awesome tool. I don't know if you guys know about it, but basically you make someone think the opposite of what you believe and that tricks them into doing something stupid. Works like a charm.

Kevin gets himself for Secret Santa and bought himself a foot bath. Kevin's feet are the butt of many future jokes on the show, from the odor, to the Kleenex box wedding shoes, to sticking his feet in a hotel ice box.

11. Pam Steals The iPod, Not The Teapot

This is one of those early moments where Pam feels weird about her feelings for Jim and acts out. Classic guy-gets-girl-a teapot, guy-loses-teapot-and-girl.

Yeah, that'll do it.

13. Dwight Gets The Teapot

And, it is too much for Jim to handle.

Oh man, remember Roy? He was (air quotes) going to buy Pam an iPod (end air quotes). I bet Pam never did get that iPod.

15. Pam Gets The Teapot/Jim Hides The Card

Because, Pam traded her iPod for Jim's teapot — so many crush-tastic feels! But, at the last minute, Jim doesn't share the card. In the final season, the card, much to fans' delight, resurfaces and he finally gives it to Pam. Though, as an audience, we never learn its contents.

So, this happened. Dwight put a stop to it immediately because of his then burgeoning, and secret, relationship with Angela. Angela happened to see the whole thing and was not happy about it — like break bulbs in the alley unhappy.

17. And, Of Course, The Origin Of Meredith’s Topless Picture

That Michael later reveals he put in the office newsletter. Classic.